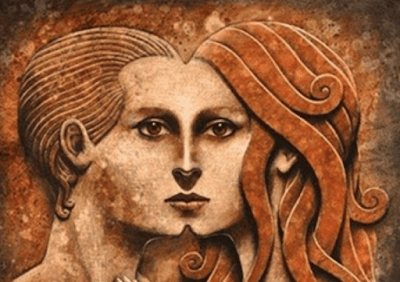 According to Kabbalists, Adam, whom they call Adam Ha-Rishon (primoridal human consciousness), was created as both male and female, but was separated into two creatures; “Adam” and “Eve”. The Midrash Rabbah says that,

Perfection, according to these occultists is man returning to his”original” state, “re-ascending” to divine consciousness.

Cooper says of the original androgynous creature that,

“It could see to the far reaches of the universe, for the light at that time was called Ohr Ein Sof, the limitless light, a metaphor for pure awareness. Adam Ha-Rishon did not see with eyes, it saw with an immeasurable “knowing.” This teaches that as each and every mortal being is a spark from the original Adam Ha-Rishon, we all have the potential to perceive everything knowable in this universe.”

Knowledge … Gnosis … Consciousness … . Where have we heard that before?

From openly transgender celebrities like Bruce/Kaitlyn Jenner to the countless hidden ones, the androgynous agenda being played out in the media is very real, very evil, and is behind the push for all things transgender, from bathrooms to politically-correct-gender-neutral–terminology.

According to Rabbi David Cooper,

“The Hebrew word for serpent (nahash) is equal in value to the word for messiah (meshiach).

From this kabbalistic perspective, the serpent is the vehicle for messianic consciousness. Thus the serpent represents far more in mystical Judaism than is commonly known, and a deeper understanding of these teachings changes entirely our appreciation of the story of creation.”

Gregg Fetter explores this phenomenon in light of scripture.

Trump and The Androgynous Agenda

What is androgyny?  Let’s begin with a definition:

Androgyny: having the characteristics or nature of both male and female.

Some people think that God Himself is androgynous having both male and female characteristics.

But this isn’t true.  The Bible specifically states that God is masculine.

The masculine pronouns “his and he” are used to describe God.

Male and Female (Them)

And the rib, which the Lord God had taken from man, made he a woman, and brought her unto the man.Genesis 2:22

In doing so God gave them different qualities.  God made the man masculine and named him Adam (after “a•dam”). God made the woman feminine and Adam named her Eve. Even so, both male and female reflect God’s character having been made in his image (Genesis 1:27).

The Origin and Goals of Satan

We’ve discussed how God created man and woman in his image, but in order to understand “Trump and the Androgynous Agenda”, we have to understand Satan: who he is, what happened to him and what his goals are.

1.  Satan began as Lucifer, a high level guardian angel who walked among the fiery stones on the holy mount of God (Ezekiel 28:12-14).

We know that Lucifer’s beauty made him prideful, but what was the impetus that caused him to sin?

Lucifer became jealous when he realized that he was NOT going to be the pinnacle of God’s creation— MAN WAS.

•  I will ascend to the heavens;

•  I will raise my throne above the stars of God;

•  I will sit enthroned on the mount of the assembly, on the utmost heights of Mount Zaphon;

•  I will ascend above the top of the clouds;

With this outrage, Lucifer is driven from the mount of God and expelled from God’s presence (Ezekiel 28:15-16).

In this we must realize that we are dealing with a very angry adversary.  This is the way the Bible describes Satan now:

Be sober, be vigilant; because your adversary the devil walks about like a roaring lion, seeking whom he may devour.1 Peter 5.8

Satan seeks to “devour” us because he is angry with God. He wants to get back at God by getting back at God’s creation.

One of the ways he does this is to ALTER the image of God’s creation.  From the beginning Satan began to create man in HIS image.

In Deuteronomy we see that God warns man not to alter his masculine image:

A woman shall not wear anything that pertains to a man, nor shall a man put on a woman’s garment, for all who do so are an ABOMINATION to the Lord your God.Deuteronomy 22:5

Yet Satan, through sin, goes about altering the image of God.  Man became as female and female became as man:

For this reason God gave them up to dishonorable passions. For their women exchanged natural relations for those that are contrary to nature;  and the men likewise gave up natural relations with women and were consumed with passion for one another, men committing shameless acts with men and receiving in themselves the due penalty for their error.Romans 1:26-27

The Bible tells us that these abominations were in the nations that the Israelites drove out when they conquered the promised land, and later were in Israel when they fell away from the Lord.

And there were also sodomites in the land: and they did according to ALL the abominations of the nations which the Lord cast out before the children of Israel.1 Kings 14:24

This image of man as a female/man, can be traced from the sin of Cain, through Babel, to Sodom and Gomorrah and into the nations with minimal effort.

But where is the female/male image today?  It’s all around you but you don’t notice it.

The misconception is that the androgynous image is easy to identify.  Up until fifty years ago that may have been the case, however today with surgical techniques and hormonal therapy, very convincing simulations of the male-to-female (MTF) image can be achieved.

Here are some examples of openly transgendered people.

Identifying Transgenders: What are the Differences between Men and Women?

The most reliable indicator of a person’s sex is the pelvis. Females have a wider and larger pelvis to accommodate childbearing.  Males have a narrow and compact pelvis.  The female pelvis tips forward and splays outward.  Whereas the male pelvis is straight up and down and does not tip. 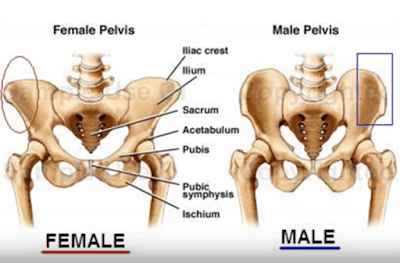 Because females have wider hips, their legs connect to the pelvis at a larger angle.  This is known as the Q-Angle of the knee. 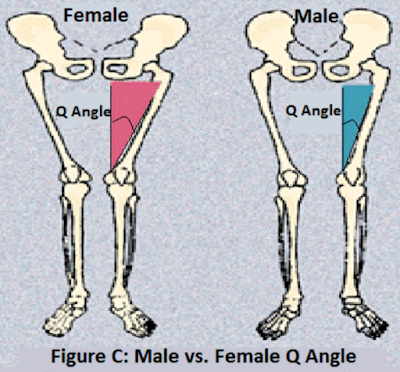 Typically women’s hips are the same or wider than their shoulders.

Typically men’s shoulders are wider than their hips. 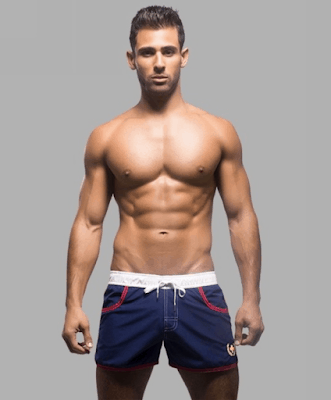 The second most important indicator in determining the sex of a person is the skull.

Male skulls are larger than female skulls.  Male foreheads slightly slope whereas female foreheads are more vertical. Males have brow ridges and women do not. 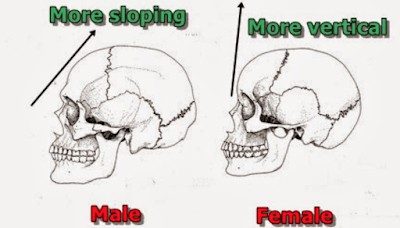 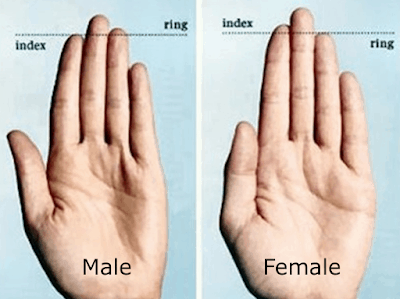 While some of the differences between men and women can be minimized or even eliminated with surgery or pre-puberty hormonal treatment, a person’s skeletal structure cannot.

As a result, using the key indicators above it is possible to tell if someone is transgendered.

In the case of the transgenders above, we don’t have to guess.  They have openly and honestly confessed they are transgendered.  Go back and notice the male waist indents on both of these people.  While we grieve their decision to become transgenders, and we wish they’d allow God to help them sort out their emotional issues, as Christians we respect their right to make a transgendered decision.

Note:  I would like to point out that being transgendered does not mean that you are a Luciferian or that you have an agenda.  People are transgendered for a variety of reasons, I think largely because they are dealing with trauma in their lives.  That being said, in the balance of this article, I will discuss transgenders who are knowingly part of a Luciferian agenda to change the image of man.  My heart goes out to all transgenders that are struggling with personal issues to which they have had no say.  I am not against you, I am for you!  I pray you can find your way back to the God of the Bible who loves you and died for you (John 3:16).

With this being said, our world is filled with secretly transgendered people.  The reason they are secretly transgendered is because they have an agenda.  Their agenda is to subvert the normal male response to woman. With the careful twisting of male sexual desire, Satanists hope to make real woman less attractive and make male-to-female transgenders (MTF) more appealing thus advancing the androgynous agenda.

Here are 4 male-to-female transgenders (MTF) in the entertainment industry men have been lusting after for years:

Mr E, who is a Christian trans investigator, gives his review on Keira Knightley

This trans investigator shows the effectiveness of Voice Feminization Surgery (begin video at 4:50)

Not only are there male-to-female transgenders (MTF) in the entertainment industry, the political arena has them as well. Here are a few examples:

Trump and the Androgynous Agenda

What is the Androgynous Agenda?

The androgynous agenda is to hide Satan’s image from you until you are forced through social or legal pressure to accept it.

Where does Trump stand on this issue?

If you believe that Trump is married to a transgendered woman, as many do, his innocence seems unexplainable. How could God use him to “Make America Great Again” if he is part of the androgynous agenda— the agenda to promote Satan’s image?

With this in mind, who is Trump, what’s going on and where is he taking us?

As the Pendulum Swings

The best explanation I have is that Trump is Luciferian. Luciferian’s will tell you that there is a difference between a Satanist and a Luciferian.  Satanists’ are more about negative energy, about self interests, whereas the Luciferian is about positive energy.  They see themselves as “enlightened ones” and try to do good, albeit for the glory of Satan.

And now in the world of Satan with Trump, as the pendulum swings to the right we will see LEGISLATED MORALITY. From permissive gender identity laws to the challenge of Christian ethics in the field of bio engineering.  In all of this we see Luciferianism at work.In a world ruled by Satan (2 Corinthians 4:4), it’s good to be aware of both ends of the pendulum as it swings.

What can be said of Luciferianism when it comes to bio engineering?

When children are given estrogen or testosterone before puberty many features that would ordinarily reflect their specific gender can be subverted, such as the Adam’s apple in a man.  Testosterone can produce whiskers on a woman and change the structure of her skull.  What can’t be changed is the basic skeletal structure of each.

Where does this leave us?  What can be said once you awaken to widespread transgenderism in our world?  That we are truly in the last days, that Trump is not going to save us!  The one who has saved us and will save us is our Lord Jesus Christ.  Our eyes should be on Him, we should get right with Him.

In the last days he “marks” those who are his (Revelation 7:3-8) and he shows them what to do.  To find your calling, refer to my article, God’s End Time Army: Where Do You Fit In?

For further research, here are some excellent articles on transgenderism by Christian researcher and writer Jeremy James.

Maranatha! (the Lord is coming)