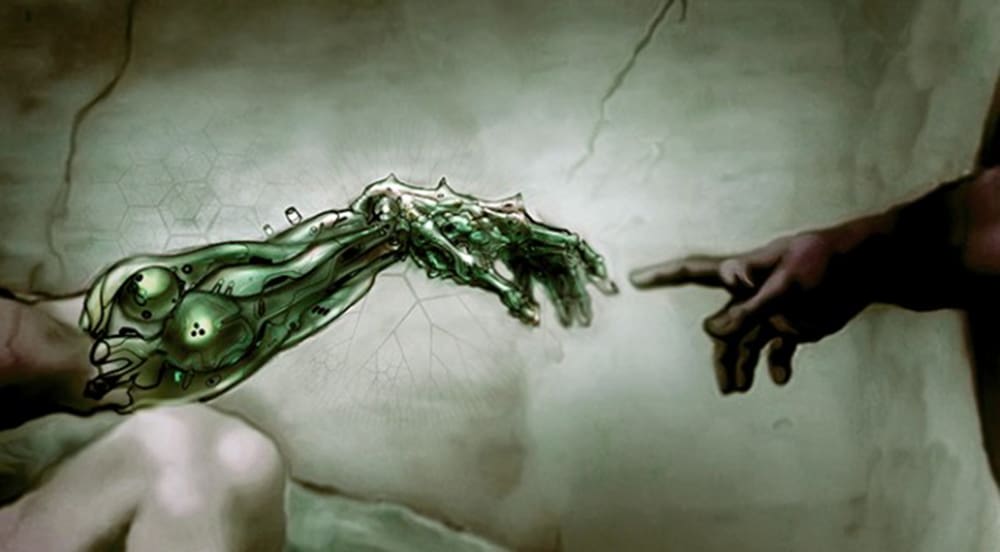 I am not a pantheist. I am a Christian with a life-long responsibility to this planet. So, when I heard someone say that the last biological humans where alive today, I thought this to be absurd. What I failed to consider was the depth of the struggle between good and evil, and I failed to consider that biological nature, or God’s creations, could be targeted to such an extent as to turn all life as created into concocted, reinvented or recreated entities.

All of nature has existed from the beginning. It really does not matter what that beginning looks like to you or me; the earth has remained a ball of fire, rock and water spinning in the vastness of the universe from its beginning. It is a miracle unto itself, and its beauty is beyond comprehension; the green forests, the oceans, rivers, streams and wetlands, the blue skies; the creatures, the mountains, deserts, prairies and coastal areas, all interconnected works of seasonal art in a perfected, interdependent mastery of life itself. We have loved this planet, travelled to see its great beauty, and we have studied its mysteries from the beginning because we could not do otherwise. I have learned that to travel is to adopt the entirety of God’s creation, my belief I realize, and to love the nature of a creator as envisioned and demonstrated through such ultimate creative brilliance.

I could not have imagined contempt for biological life as if it was lacking or inadequate. I never considered evolving into a new creature nor desired to change into a synthetic or scientific invention. I was educated in the liberal arts and was not science prone; I sought knowledge in the humanities; philosophy, religion, history, literature, the classics, and when one studies such, the fundamental nature of humankind becomes clear in its repetitive historical cycles. It becomes clear that as a species we are very unique in our steadfast seeking and infliction of any and all cruelties in order to gain power, riches, control and authority over all biological life and especially other humans. As a species we seek to overtake and control life itself and at any cost. All of human history speaks to this infliction as everything in nature, including humanity, was and is considered “acceptable losses.” In all of biological life, this belief is unique to human beings. We believe that to kill is to improve, to conquer is to win, and that constantly changing our tactics in war, wealth seeking, discoveries, and in our social systems and beliefs, we advance. Human history, however, does not back up this belief. What history documents is humankind’s steadfast seeking and infliction of any and all cruelties to gain power, riches, control and authority over planetary resources and people. Humanity has always remained fundamentally and profoundly vicious and contemptible in a near-suicidal contempt of itself. Though human inventions have advanced, the innate nature of humanity has actually never progressed at all.

Good manners, even faith for example, are taught and enforced codes of conduct as is charity and kindness. These are not natural states or actions. Our actual natures are self-preserving, competitive, and prone to criticism and often contempt of others. We have an innate darkness within us, and once this darkness is combined with riches, control and powers, enhanced self-preservation, competition and criticism evolve; so much so that control seeking becomes vicious and often sociopathic at any cost. Strangely, history confirms that humankind attempts to control other humans and the planet above all other missions on earth. It is as if the ultimate goal is to reinvent life, even in efforts to recreate human life into slavish perfection.

We are on the brink of humanity and biological nature. We are being deluged with nano-particulates of known and unknown origins, with synthetic, created substances of which there is no avoidance. Not only are all fresh and salt waters acidifying but forests are burning in the hundreds of millions of acres globally while methane releases are destroying planetary oxygen; we are now fed with unknown, genetically altered and jet-sprayed foods—all containing synthetic, created substances, nano-sized and, as such, unavoidable. We are being recreated genetically, intellectually and electrically.

How much time human beings have left is unknown because we are beholding to those in control, their endless wealth and patents, and more importantly their wills. Due to the stratospheric spraying, particularly of polymer substances and metals, we are infected by their wills and intentions at present as is our food, water and atmosphere. This is the reason for the rapid physiological destruction of elderly and children’s brains, the epidemic failure of major organs in the human body, our chronic breathing problems, our deteriorating physical, mental, spiritual and intellectual conditions, the unfathomable extinction rates of animals, and the global destruction of water, soil and air. We are all infected to a purpose. In bitter and unconscionable truth, we are no longer purely biological creatures.

Those in control have recreated not only humankind but also intellectualism and education. We have been taught that science is omniscient, robots are superior to biological humans, and that all decisions of those in power are benevolent. We clearly believe this as we steadfastly cling to our loyalty to Red and Blue leadership, the very people who knowingly damaged the entire planetary system, including our bodies. What they have created and what they have done and continue to do to the planet will seemingly play out.

So many of us work for and await the global outcry and pray for its forthcoming. One way or another, I am thankful for my faith because, without it, I simply would not know who or even what I am.

Please watch these two videos as my conclusion to this article:
{youtube}pzW5Kb8u0Og{/youtube}
{youtube}asBu832v0rc{/youtube}