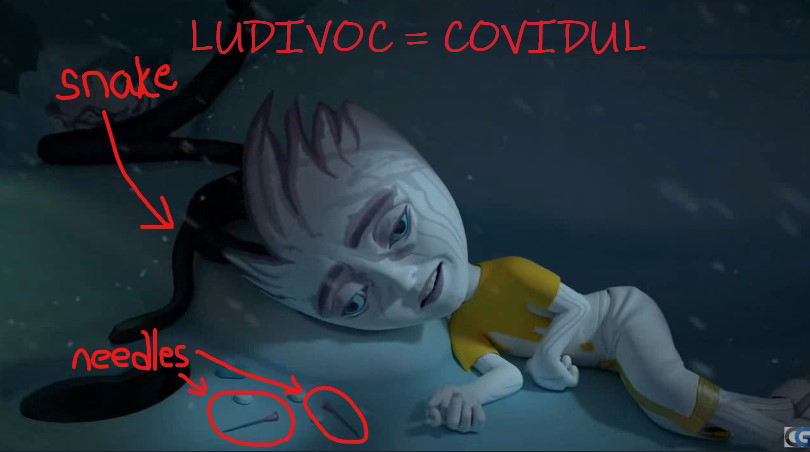 Maybe you’ve seen this pointed out elsewhere but I hadn’t until today. This video creator found some interesting details in I Pet Goat 2, beginning with the character “Ludovic.”

Notice that the serpent has completely invaded, (consumed?) replaced the mind of the fractured, sickly character.

She makes some interesting connections, ending with the fourth seal & pale horse of Revelation 6 that brings death to 1/4 of the earth. But we know that they’re playing out their Dispensational script.

Now, she doesn’t say whether she was just illustrating the fact that they’re following the script they’ve turned Revelation into or whether she believes it is fulfilled prophecy. But for those who are still wrestling with this, I feel like it’s important to know that the book of Revelation depicts symbolic of events that have been ongoing throughout the church age with an increasing intensity rather than all being fulfilled in a 7-year “tribulation” period preceding Christ’s return to set up an earthly kingdom. Why? Here are a few reasons –

The harsh reality is that they will likely play out their script as they ominously allude to in movies like I Pet Goat 2. Many people will likely die… although we were always going to die (Heb 9:27). But Jesus told us not to fear, comforting us with the hope that our Father was pleased to give us the kingdom. (Luke 12:32) His kingdom is spiritual; Christ in you the hope of glory! (Col 1:27) His kingdom has come. It has never been of this world and it never will be.

So, if looking at these things has any value, it’s to see that there is a much greater plan in motion than an effort to keep us safe from the rebranded flu. But Satan wants more than to merely kill God’s creation. His goal is to garner worship through the complete enslavement of our minds through fear and lies.