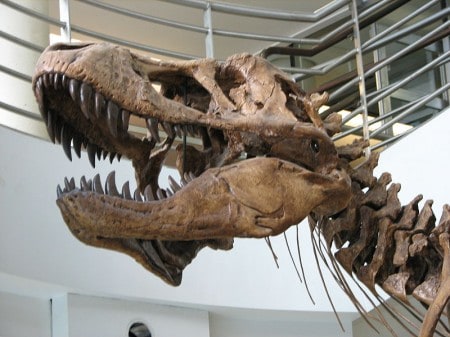 A fossil bed in China that is being called “Jurassic Park” has yielded perhaps the greatest dinosaur soft tissue discovery of all time.  According to media reports, “nearly-complete skeletons” have been discovered that even include skin and feathers.  But of course if these dinosaurs are really “160 million years old”, that should be absolutely impossible.  Needless to say, this shocking discovery is once again going to have paleontologists scrambling to find a way to prop up the popular myths that they have been promoting.  What they have been telling us simply does not fit the facts.  The truth is that this latest find is even more evidence that dinosaurs are far, far younger than we have traditionally been taught.

Once upon a time, scientists believed that it would be impossible to find anything other than the hardened fossilized remains of extinct dinosaurs.  And if those dinosaurs really were millions of years old, those scientists would have been 100% correct.  But instead, we are now starting to find dinosaur soft tissue all over the place.  The following is an excerpt from a recent Daily Mail articleabout this new discovery in China…

Almost more impressive than the diversity of the biota is the preservation of many of the vertebrate specimens, according to the study published in the Journal of Vertebrate Palaeontology.

Fossils include complete or nearly-complete skeletons associated with preserved soft tissues such as feathers, fur, skin or even, in some of the salamanders, external gills.

One is the feathered dinosaur Epidexipteryx whose soft tissues have been revealed by the use of ultraviolet light scanners.

A fossil of the salamander Chunerpeton shows not only the preserved skeleton but also its skin and external gills.

Hopefully scientists in the west will get a chance to closely examine these soft tissue samples.

Prior to 1991, you would have been laughed out of the room if you had suggested that we might dig up the soft tissue of dinosaurs someday.

But all of that changed when Mary Schweitzer, a molecular paleontologist at North Carolina State University, did something that was absolutely unthinkable.  The following comes from an article in Smithsonian Magazine…

In 1991, Schweitzer was trying to study thin slices of bones from a 65-million-year-old T. rex. She was having a hard time getting the slices to stick to a glass slide, so she sought help from a molecular biologist at the university. The biologist, Gayle Callis, happened to take the slides to a veterinary conference, where she set up the ancient samples for others to look at. One of the vets went up to Callis and said, “Do you know you have red blood cells in that bone?” Sure enough, under a microscope, it appeared that the bone was filled with red disks. Later, Schweitzer recalls, “I looked at this and I looked at this and I thought, this can’t be. Red blood cells don’t preserve.”

Schweitzer showed the slide to Horner. “When she first found the red-blood-cell-looking structures, I said, Yep, that’s what they look like,” her mentor recalls. He thought it was possible they were red blood cells, but he gave her some advice: “Now see if you can find some evidence to show that that’s not what they are.”

What she found instead was evidence of heme in the bones—additional support for the idea that they were red blood cells. Heme is a part of hemoglobin, the protein that carries oxygen in the blood and gives red blood cells their color. “It got me real curious as to exceptional preservation,” she says.

Of course since that time, many others have also dug up dinosaur soft tissue.  At this point, more than thirty specimens have been discovered and tested, and the specimens have come from an impressive array of various dinosaurs…

The dinosaurs and other Mesozoic creatures that have yielded their biological material are hadrosaur, titanosaur, ornithomimosaur [ostrich-like dinosaurs], mosasaur, triceratops, Lufengosaurs, T. rex, and Archaeopteryx.

When Schweitzer originally made her discovery public, she was viciously attacked by other evolutionists who insisted that finding dinosaur soft tissue that was millions of years old was absolutely impossible.

And those evolutionists were right.

If the dinosaurs were really that old it would be impossible.

But now sample after sample and test after test have proven without a shadow of a doubt that we really are digging up dinosaur soft tissue.

Schweitzer and other paleontologists that are desperate to prop up their existing theories are now suggesting that “iron in the blood” could have preserved the soft tissue that we are finding for all of these millions of years.

If you believe that laughable theory, I have a bridge to sell you.

But there are a lot of people out there that are so desperate to keep believing their flawed version of “the truth” that they are actually buying it.

If you are interested in more of the technical details of this theory, you can find a more detailed explanation right here.

It is not just dinosaur soft tissue, either, but the presence of detectable proteins such as collagen, hemoglobin, osteocalcin, actin, and tubulin that they must account for. These are complex molecules that continually tend to break down to simpler ones.

Not only that, but in many cases, there are fine details of the bone matrix, with microscopically intact-looking bone cells (osteocytes) showing incredible detail. And Schweitzer has even recovered fragments of the even more fragile and complex molecule, DNA. This has been extracted from the bone cells with markers indicating its source such that it is extremely likely to be dinosaur DNA.

In this case, I think that it would be very appropriate to apply Occam’s razor.  The reason why we are finding dinosaur bones with soft tissue in them is because they simply are not very old.

And when we carbon date dinosaur bones, it tells us the exact same thing.

Due to the rate that it decays, there should be absolutely no measurable radioactive carbon left in anything that was once living that is greater than 100,000 years old.

So there should be absolutely no measurable radioactive carbon in dinosaur bones.

But instead, that is precisely what we find.  Here is one example…

“In June of 1990, Hugh Miller submitted two dinosaur bone fragments to the Department of Geosciences at the University in Tucson, Arizona for carbon-14 analysis. One fragment was from an unidentified dinosaur. The other was from anAllosaurus excavated by James Hall near Grand Junction, Colorado in 1989. Miller submitted the samples without disclosing the identity of the bones. (Had the scientists known the samples actually were from dinosaurs, they would not have bothered dating them, since it is assumed dinosaurs livedmillions of years ago—outside the limits of radiocarbon dating.) Interestingly, the C-14 analysis indicated that the bones were from 10,000-16,000 years old—a far cry from their alleged 60-million-year-old age.”

Additional evidence for the young age of dinosaurs comes from the fact that we find very accurate depictions of dinosaurs in ancient artwork all over the planet.  This is something that I covered in my previous article entitled “Why Does Ancient Art Contain Depictions Of Flying Aircraft, Helicopters And Dinosaurs?”

Considering the fact that we only started digging up dinosaurs a couple hundred years ago, how did those ancient people know what they looked like?

That is something to think about.

I realize that this article is going to directly challenge things that a lot of people have believed all of their lives.

But we are never going to get anywhere if we just have blind faith in whatever the system tells us to believe.

It pays to question everything and to allow logic and reason to lead us to the truth.

So what are your thoughts on all of this?  Please feel free to share what you think by posting a comment below…

About the author: Michael T. Snyder is a former Washington D.C. attorney who now publishes The Truth. His new thriller entitled “The Beginning Of The End” is now available on Amazon.com.