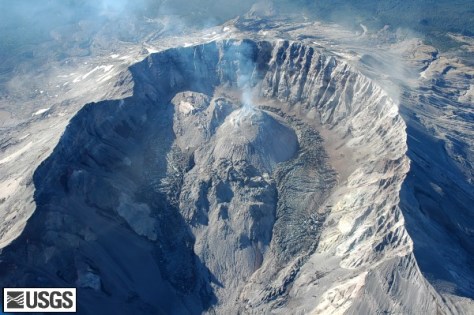 View of Mt. Saint Helens new magma dome , building along with a rise in the area, and a “re-pressurization” of the magma chambers beneath the area.

The Pacific Northwests magma chamber reservoirs are “Re-pressurizing” according to a new report released by the USGS. Summed up, the magma chambers associated with Mt. Saint Helens have been now verified to be building in pressure, causing a rise in the area around the Volcanoes caldera. ______   Posted on the USGS / CVO site , April 30, 2014: http://volcanoes.usgs.gov/cap/cap_display.php?releaseid=10035 “Posted via the USGS Volcano Notification Service (VNS) http://volcanoes.usgs.gov/vns/ Analysis of current behavior at Mount St. Helens indicates that the volcano remains active and is showing signs of long-term uplift and earthquake activity, but there are no signs of impending eruption. Since the end of the 2004-2008 dome-building eruption at Mount St. Helens, scientists at the USGS Cascades Volcano Observatory (CVO) and the Pacific Northwest Seismic Network (PNSN) have been monitoring subtle inflation of the ground surface and minor earthquake activity reminiscent of that seen in the years following the 1980-1986 eruptions. Careful analysis of these two lines of evidence now gives us confidence to say that the magma reservoir beneath Mount St. Helens has been slowly re-pressurizing since 2008. It is likely that re-pressurization is caused by arrival of a small amount of additional magma 4-8 km (2.5-5 miles) beneath the surface. This is to be expected while Mount St. Helens is in an active period, as it has been since 1980, and it does not indicate that the volcano is likely to erupt anytime soon. Re-pressurization of a volcano’s magma reservoir is commonly observed at other volcanoes that have erupted recently, and it can continue for many years without an eruption. USGS and PNSN are continuing to monitor ground deformation and seismicity at Mount St. Helens. In an effort to learn more about activity beneath the volcano, they will conduct two additional types of measurements this summer. Surveys will measure the types and amounts of volcanic gases being released, and the strength of the gravity field at the volcano. Both types of measurements are sensitive to changes in the amount or depth of subsurface magma. The information collected at Mount St. Helens continues to help scientists interpret behaviors at other volcanoes and to improve eruption forecasting capabilities. Additional research results will be posted in USGS Updates, Information Statements, and on the USGS-CVO website. In a previously planned but related development, an experiment called “Imaging Magma Under St. Helens” (iMUSH) will start this summer and run for the next few years. The experiment, jointly funded by the National Science Foundation and USGS, is designed to produce a better picture of the magma plumbing system under the volcano. It may also provide new insights into the ongoing re-pressurization process. The USGS Cascades Volcano Observatory and Pacific Northwest Seismic Network continue to monitor Mount St. Helens and other volcanoes of the Cascade Range for signs of increased unrest. The likelihood of detecting short-term precursory phenomena before the next eruption at Mount St. Helens is enhanced by the existence of an effective monitoring network established in response to recent eruptions. Efforts are underway to bring networks at other dangerous volcanoes in the Cascade Range up to a similar standard. The USGS and the Pacific Northwest Seismic Network at University of Washington continue to watch conditions at Mount St. Helens closely.” ______   After reading the above article from the USGS…. This should be no shock to those of us who have been following the other volcanic events happening over the past few months along the West Coast. Remember this?  Just over 2 weeks ago, on April 14th……  Maybe you missed it …  a large plume event from

_____ Also, lets not forget what we just found out about the Yellowstone volcano. The magma chambers associated with Yellowstone appear to be “re-pressurizing” as well,  the area around Yellowstone has risen by 2 inches in just FOUR months time (since New Years 2014). http://dutchsinse.tatoott1009.com/4142014-series-of-noteworthy-earthquakes-within-the-yellowstone-magma-chamber/

_____ Is it any wonder these events below are happening along the West Coast at the same time as all of the above? _____

Plume from just southeast of golden trout creek volcano — from in between two dormant unnamed volcanic peaks, part of the larger volcanic complex seen in this screenshot.