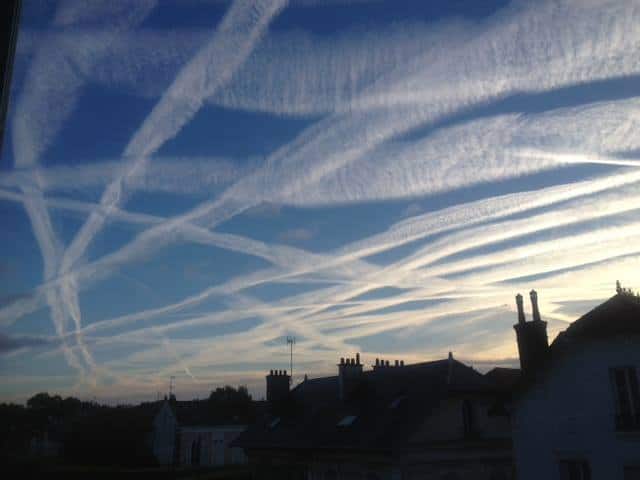 Just what exactly are those mysterious airplane vapor trails seen filling America’s skies? A group of independent investigators may have the answer.In a series of high-tech programs that would enthrall the most dedicated science fiction fans, the military is producing what have become known as “chemtrails” — the thick, viscous airplane engine trails that have been poisoning the air and ground with toxic chemicals.

EXCLUSIVE TO THE SPOTLIGHT  By Mike Blair

For two years, The SPOTLIGHT has been in contact with experts in fields ranging from medicine to nuclear energy who have been investigating the mysterious trails left by airplanes in skies all over America and in many foreign countries.

These “tracks” in the skies, believed to be left by a combination of military and civilian aircraft drawn into the massive, multi-billion dollar program, are unlike regular high-flying aircraft’s vapor trails. Instead of dissipating rapidly, these so-called “chemtrails” mesh together for hours and are often mistaken for natural clouds.

The principal chemical being deposited in the air consists of various mixtures of barium salts, which were revealed in studies undertaken by a Pennsylvania-based high-tech weapons scientist. Chemicals, he said, were being utilized as part of the development of a new radar system at Wright-Patterson Air Force Base in Dayton, Ohio. The base will be the site of a public demonstration on Saturday, June 23, starting at 1 p.m. under the sponsorship of Ohio Citizens Against Chemtrails, headed by Kim Weber, one of the citizens working on the chemtrail investigation. The rally will be attended by hundreds of people from across the nation who are concerned about these poisons being dumped out of the sky onto millions of people on the ground.

Considerable effort has been put into chemtrail research by a physicist who has been associated with Brookhaven National Laboratory on Long Island, N.Y. The scientist, with his fellow researchers, has determined that the chemtrails are being created by efforts of the military in at least four major, but separate, projects.

The first project is an effort to block the rays of the sun from hitting the Earth, including ultra-violet radiation that will come through without an adequate layer of ozone in the upper regions above the Earth. In the event of global warming, this, it is hoped, could lower temperatures on the surface of the Earth and block ultra-violet radiation from causing skin cancer in humans. The aerosol being sprayed in this case is probably aluminum oxide or a compound that would have similar properties, and is the only one of the government programs that does not use the barium mixtures.

The second and most secret project is the Navy’s Radio Frequency Mission Planner (RFMP) program, which is a system encompassing a group of computer programs. One of its supporting subprograms is know as Variable Terrain Radio Parabolic Equation or VTRPE. This is a computer radio frequency propagation program that deals with radio waves and enables the RFMP system to visually see the terrain of a battlefield in three dimensions on a television-type screen.

The RFMP system also depends on a satellites to supplement the images of a battlefield picture obtained from the ground, thus producing the 3-dimensional images. In providing an interactive picture portraying in the radar screen, the RFMP system allows the computer operator to develop familiarity with the “environment” before a war mission occurs by playing a variety of “what if?” virtual warfare scenarios on his computer screen. Since all major modes of radio frequency propagation are modeled in his computer (the RFMP system), special, sometimes counter-intuitive, cases can be examined in detail and exploited during a battle. Initially, the VTRPE computer program only worked accurately over water and along coastal areas but not over land masses because the system’s radar waves required an atmospheric condition known as “ducting,” over land, to operate accurately.

This “ducting” problem was solved by releasing an aerosol, a mixture of barium salts into the atmosphere over the United States. Thus, they can make an atmospheric radio frequency “duct” with a base of barium aerosol released from aircraft.

One of the researchers, the physicist from Brookhaven, explained how the process works: The chemical and electrical characteristics of the mixture cause moisture to stay in the clouds. The aerosol sets up an electrical and chemical environmental that supports RF ducting for the RFMP/VTRPE warfare system.”The mixture of barium salt from the aerosol when sprayed in a straight line will also provide a ducting path form point A to point B and will enable high frequency communications along that path, even over the curvature of the Earth, in both directions,” he said. “Enemy high frequency communications can be monitored easier with the straight line A to B ducting medium.”

The third project also utilizes the mixture of barium salts in the atmosphere and involves weather control. It is a project of the AIR Force and utilizes concepts of radio frequency radiation, developed originally by legendary scientist Nikola Tesla, against the ionosphere above the Earth. Known as the so-called HAARP project, it is manipulating life-support systems in the environment, testing and altering them for military advantage.

Air Force documents, obtained by the independent researchers, indicate that “the risks are high but the rewards are worth it.” The mixture of barium salts, supporting moisture, is administered along the weather fronts and manipulated in a controlled fashion. It is believed that microwave energy is also utilized in the weather control program. Weather data is also a required input to the VTRPE program of the RFMP system. Perfect weather control technology will enable the military to withhold rain, cause floods, cause drought, cause storms, withhold sunshine, damage food crops, and bring any country to its knees without firing a shot.

The fourth atmospheric project is being run by the Defense Advanced Research Projects Agency (DARPA) as a means to detect and decontaminate enemy biological attacks. The program also utilizes a mixture of barium salts as the base vehicle in aerosol, along with special polymer fibers. The combination allows detection of biological agents. Some biological agents have actually been released into the atmosphere in trials, testing the detection and decontamination systems. It is believed that barium salt, polymer fibers and other chemicals in the atmosphere are the physical irritants that may be directly or indirectly responsible for unexplained nose bleeds, asthma, allergies, pneumonia, upper respiratory ailments and arthritis-like systems. Chemicals sprayed into the atmosphere are producing air and ground conditions that may be harmful to humans and animals, while stimulating the growth of molds and bacteria. Barium salts, an Earth metal, are toxins that absorb readily into the gastrointestinal tract which are deposited into muscles and other tissue. No case data is available on the long-term effects of barium in humans.

“The programs remain secret because the Environmental Protection Agency and state environmental agencies need ‘not know’ about the by-products of the metabolites of these biological, illegal and harmful agents,” said one of the researchers. “It’s for that reason the combined projects have been kept secret from the citizens.” _____

The U.S. military is testing high-tech, experimental equipment in the eastern United States.

EXCLUSIVE TO THE SPOTLIGHT By Mike Blair

Three-dimensional radar systems, such as the Navy’s top secret Variable Terrain Radio Parabolic Equation (VTRPE) program, which visualize the terrain of a battlefield on a television-type screen, are being developed through spreading chemtrails across the nation’s skies and are being field tested in the military exercises across the country. The latest, which the Pentagon is calling “Joint Patriot 01,” is under way at Fort Drum, a military base outside of Watertown, N.Y. Exercises will run through June 30.

The Air Force Research Laboratory at Rome, located in Central New York about 75 miles from Fort Drum, used to be part of Griffiss Air Force Base, a Strategic Air Command B-52 bomber base. In 1982, the air base was closed down and the top secret laboratory was the only Air Force facility retained. The lab was enhanced and its mission scope increased. Little is known about what goes on there, but it is known that the scientists there are developing military technology involving lasers. In the mid-1990s, a local sensation was created in the vicinity of Rome when numerous residents reported seeing bizarre “balls of light” traveling at treetop level. Many believed the phenomena were created at the Air Force laboratory.

The Pentagon claims that the maneuvers at Fort Drum are “a war-fighting capability training exercise for more than 6,000 Air and Army National Guard members and elements from the Army, Air Force, Navy and Marine Corps, and allied reserve forces from Britain and the Netherlands.”

In a similar drill, not reported in the media, 26,000 military personnel on March 20 took part in a massive exercise, which involved a Navy battle group headed by the aircraft carrier USS Enterprise 200 miles off the coast of North Carolina. In the drill, Eastern North Carolina was “enemy territory” and the VTRPE system was used to keep surveillance on it. Exercises at Fort Drum and North Carolina may have been assisted by Air Force-induced weather changes.