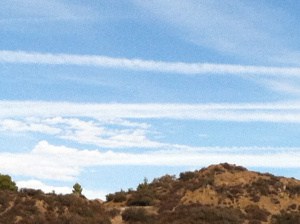 While I know from emails from people around the globe that the US is definitely not the only country being sprayed with this stuff, this is an interesting post by L. A. Marzulli

Thanks to Watcher Geoff for bringing this to my attention!

The picture on the left [above] is a picture I took near my house in the Santa Monica Mountains.  As you can see there are chemtrails all over the sky.   I have been in Peru three times now and I have not seen one chemtrail only contrails—the vapor left by jets as they fly.

“They” are spraying something over American cities and they do it day after day.   This new film exposes the unwanted, unlawful spraying of the American people, which is good news to me.  The question is, will this film, unlike others before it, create the attention that is needed?  Will the American people finally realize that toxic chemicals are being sprayed, on a daily basis, over their heads?  Will we the people shout, stop the madness?

This clip shows a meteorologist who tap-dances around the spraying of what he calls “chaff,” which is supposed to be the flares and/or aluminum sprayed out from military aircraft to avoid heat-seeking missiles.  He goes out of his way to tell us everything is OK.  He then admits on camera, that “they” have software which can erase the radar signal from this chaff!

The obvious question I would ask is this,  why does the military need to practice this drill—the spraying of so-called chaff—day after day and why does it accumulate over such a wide area?  Guess what?  It’s not chaff, it’s something else and the chemicals which are being sprayed with abandon may be creating some nasty diseases, as in the case in California.  http://www.usatoday.com/story/news/nation/2014/02/23/polio-like-illness-california/5703827/

In closing todays post:  Were chemtrials responsible for the “mysterious polio-like illness in California?  What are they spraying over our heads?  We the people must put an end to the unwanted spraying of chemicals in our skies.

The Hopi tell us that in the last days there will be spider webs in the sky.  When this prophecy was given, there were no airplanes.  While I am not endorsing the Hopi prophecy as I don’t know it’s source, I will say I find it interesting.

My last words are this.  All of what we are seeing, the endless earthquakes, bizarre weather patterns, record drought and record flooding, wild fires, fish and animal die offs, plagues and disease, and war and the rumors of war are all the signs that Jesus spoke of.  We are rapidly moving into the time of the end.  He will return and He will put an end to the madness of men and their hidden allegiance to the Fallen One.

We should never forget that we are in a supernatural war and what is manifesting is results of it.  The mystery of iniquity is at work.   The Fallen One is ramping up for the arrival of his unholy seed, the one who is in place of the Messiah—The Antichrist.  With all that is going on we should cling to the words of our savior who admonishes us: when you see these things begin to happen look up for your redemption draweth nigh.  This is our blessed hope!