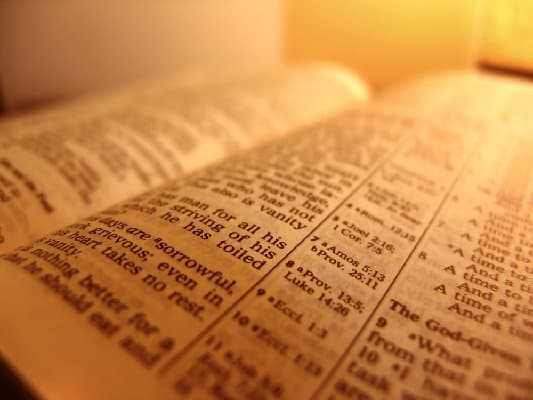 The recently discovered involvement of the Jesuits in the modern Bible versions gives new meaning to the fact that the new pope is a Jesuit. For centuries, the Society of Jesus, aka, the Jesuit Order, has shunned such a high profile position. Their strategy of bringing the world under the power of the pope has been to work behind the scenes, becoming confessors of the powerful and educators of the next generation of world leaders.

The Jesuit general is also known as the “black pope.” It has long been assumed that he was close to the power center of the Vatican universe. One Jesuit told author David W. Daniels that the pope was basically a Jesuit puppet.

Daniels’ latest book, Why They Changed the Bible, describes how Jesuits have been influencing Bible societies since their founding, and Bible translation projects for over 150 years. Their success in shifting the Bible text to accommodate Roman Catholic dogma allows them a new boldness in pushing the “unity” agenda. Almost all modern versions now are based on Roman Catholic approved manuscripts.

A generation ago, Roman Catholics were discouraged from reading the Bible. When the King James Version dominated, Rome’s teachings on the Eucharist and the Virgin Mary goddess stood in stark contrast to scripture. Readers of the KJV could clearly see the false teaching. Now, the trend is clear toward a Bible whose “fuzzy” wording leaves room for Roman dogma.

Apparently, the Vatican no longer fears for their people to read the Bible. In the past, excommunication, inquisition or death was pronounced upon anyone who dared read the Bible for himself, without the “church” to interpret it for him. Now they have Catholic Bible studies.

They have cleverly convinced Protestants that it is because “mother church” has changed. But if you scratch the surface you find that the basic pagan teachings of wafer god, Virgin Mary goddess, salvation by works, confession to a priest, indulgences, and purgatory have not changed.

So, what did change? Daniels proves that it is the Bible that has changed. The Jesuit calendar is measured in 100+-year plans. In the early 1800s, a decision was made to abandon violence in fighting the Reformation. Instead of trying to stamp out the Bible and execute all the Bible believers, Daniels says they decided to “fix” the Bible.

Thus began a clandestine, multi-century campaign to change the Bible where it contradicted their pagan doctrines. They resurrected corrupted manuscripts from the waste baskets of history and maneuvered them into the translation process as foundation documents for future “revisions.” Jesuits were welcomed onto translation committees and Bible society boards of directors to help develop an “interconfessional Bible.”

As usual, anyone who tries to “compromise” with Rome eventually learns it is a one-way street. Popes brag that the Catholic “church” never changes. They stress working on common ground such as abortion and “evangelization,” but if Protestants look closely, they are helping promote a false gospel of salvation by works and submission to “Mother Church,” in the name of “unity.” Eventually, all roads DO lead to Rome.

Daniels shows that, not only are the modern Bible versions resting on the quicksands of polluted manuscripts, but the venerable Wycliffe Bible Translators are now exclusively using a Greek text approved by Rome for its “interconfessional” qualities. Catholic missionaries readily use Wycliffe-SIL translations to entice native tribes into Rome’s spider web of baptized paganism. Only Bible-believers, who trust God’s preserved words in the King James Bible, are equipped to resist the tide toward one world Bible for one world religion.