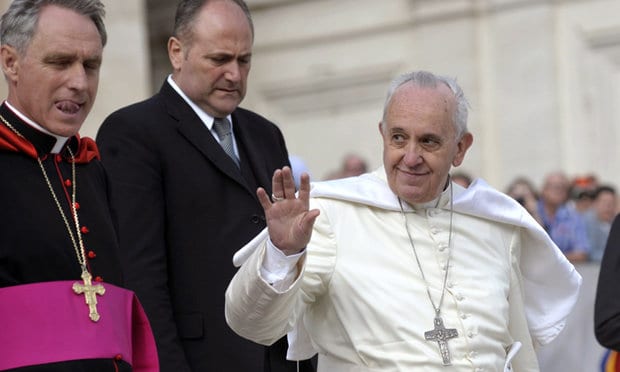 HHA | 10/30/2014
(Reuters) Speaking to the Pontifical Academy of Science, Pope Francis said that the Big Bang and evolution do not contradict the “intervention of God” as a creator, rather it requires it.

Delivering an address to the Pontifical Academy of Sciences, Pope Francis continued his habit of making provocative, seemingly progressive statements. The pontiff appeared to endorse the theory of the Big Bang and told the gathering at the Vatican that there was no contradiction between believing in God as well as the prevailing scientific theories regarding the expansion of our universe.

“When we read about creation in Genesis, we run the risk of imagining God was a magician, with a magic wand able to do everything. But that is not so,” Francis said. “He created human beings and let them develop according to the internal laws that he gave to each one so they would reach their fulfillment.”

The pope avoids gesturing at the thorny issue (at least for some Christians) of whether humans descended from apes. Atheists argue, moreover, that understanding the Big Bang and what emerged from that cosmic moment obviates a need to believe in a deity. On that count, Francis obviously disagrees. He repeated the idea of God not being a “magician,” an entity that conjured all into being.

“God is not… a magician, but the Creator who brought everything to life,” Francis said. “Evolution in nature is not inconsistent with the notion of creation, because evolution requires the creation of beings that evolve.”

In other words, to borrow from an earlier Enlightenment idea, God is morea clockmaker than a conjurer of miracles.

Such thinking is not new for the Catholic Church, which for six decades — since the reforms of Pope Pius XII — has espoused belief in theistic evolution. That hinges, of course, on the fundamental acceptance of a higher power.

A 2006 article in the Vatican’s main newspaper also distanced the Catholic Church from the idea of “intelligent design,” which it said should not be taught in schools as science. The Catholic News Service, which summarizes the article here, explains what distinguishes the Vatican’s thinking from more secular understandings of evolution.

What the church does insist upon is that the emergence of the human supposes a willful act of God, and that man cannot be seen as only the product of evolutionary processes, it said. The spiritual element of man is not something that could have developed from natural selection but required an “ontological leap.”

Francis’s more conservative predecessor, Pope Benedict XVI, espoused this view and found the American debate between creationists and those who backed evolution “absurd.” He asked in 2007 why “those who believe in the Creator would not be able to conceive of evolution, and those who instead support evolution would have to exclude God.” And then went on:

This antithesis is absurd because, on the one hand, there are so many scientific proofs in favor of evolution which appears to be a reality we can see and which enriches our knowledge of life and being as such. But on the other, the doctrine of evolution does not answer every query, especially the great philosophical question: where does everything come from? And how did everything start which ultimately led to man? I believe this is of the utmost importance.

Skeptics and atheists, though, may agree with the importance of those questions. But they’re still looking for very different answers.