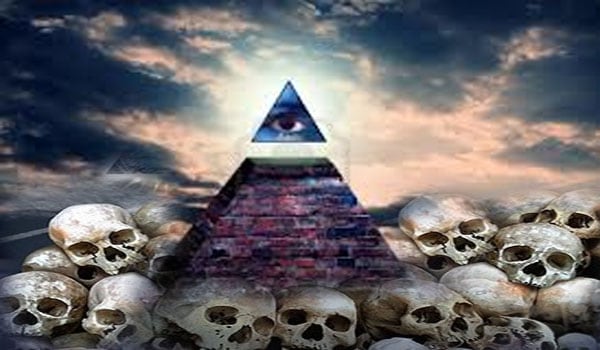 (NaturalNews) The depopulationists are on the move again, pushing hard for the elimination of six billion people on planet Earth in order to bring the planet down to what’s being touted as its “sustainable carrying capacity of one billion people.”

But this time, the depopulation agenda may be codified by the Vatican. Professor John Schellnhuber has been chosen as a speaker for the Vatican’s rolling out of a Papal document on climate change. He’s the professor who previously said the planet is overpopulated by at least six billion people. Now, the Vatican is giving him a platform which many expect will result in an official Church declaration in support of radical depopulation in the name of “climate science.”

“The teaching document, called an encyclical, is scheduled for release on June 18 at Vatican City,” reports Breitbart.com. “Perhaps with the exception of the 1968 encyclical on contraception, no Vatican document has been greeted with such anticipation.”

Schellnhuber daydreams about a “Planetary Court” guided by a new “Earth Constitution” which would hold power over every nation and government on the planet. As he explains himself in this document on HumansAndNature.org, he’s a proponent of an all-powerful, climate-focused world government that would rule over the planet… a literal “science dictatorship” based on whatever “science” the climate change proponents can fudge together each year.

Let me conclude this short contribution with a daydream about those key institutions that could bring about a sophisticated — and therefore more appropriate — version of the conventional “world government” notion. Global democracy might be organized around three core activities, namely (i) an Earth Constitution; (ii) a Global Council; and (iii) a Planetary Court. I cannot discuss these institutions in any detail here, but I would like to indicate at least that:

– the Earth Constitution would transcend the UN Charter and identify those first principles guiding humanity in its quest for freedom, dignity, security and sustainability;

– the Global Council would be an assembly of individuals elected directly by all people on Earth, where eligibility should be not constrained by geographical, religious, or cultural quotas; and

– the Planetary Court would be a transnational legal body open to appeals from everybody, especially with respect to violations of the Earth Constitution.

Schellnhunber, in other words, believes a new world government can create “freedom” for humanity by dictating to it with a new Planetary Court guided by an Earth Constitution which will no doubt begin by declaring the planet can only sustain one billion people. The other six billion or so simply have to go. So instead of a Bill of Rights, this new Earth Constitution will be founded on a Bill of Deaths and a global government that might order the extermination of billions of human beings in order to “save the climate.”

“In an unprecedented encyclical on the subject of the environment, the pontiff is expected to argue that humanity’s exploitation of the planet’s resources has crossed the Earth’s natural boundaries,” reports The Guardian. “…[T]he world faces ruin without a revolution in hearts and minds.”

The Guardian goes on to report:

The pope is “aiming at a change of heart. What will save us is not technology or science. What will save us is the ethical transformation of our society,” said Carmelite Father Eduardo Agosta Scarel, a climate scientist who teaches at the Pontifical Catholic University of Argentina in Buenos Aires.

California Governor worried that too many people exist

Interestingly, California Governor Jerry Brown might welcome such a depopulation agenda organized under a new world government. He recently tweeted about California having too many people, saying, “At some point, how many people can we accommodate?” Gov. Brown goes on to say that climate change is the reason the current drought is so much more worse than anything they’ve seen in the past.

Apparently, California has too many people, Gov. Brown says, and that means California needs to be deliberately depopulated.

With this, the Vatican and Jerry Brown join the efforts of other depopulation advocates like Bill Gates, who once said that vaccines can help reduce the world population by 10 to 15 percent.

True to that claim, vaccines given to young women have now been discovered to be intentionally laced with sterilization chemicals, according to the Kenya Catholic Doctors Association, a pro-vaccine organization funded in part by UNICEF.

Similarly, a shocking 75% of children given vaccines in a small town in Mexico ended up hospitalized or dead after a recent round of vaccine shots that many have speculated might be part of a depopulation test run.

Since YOU are one of the targets of global depopulation, you may want to increase your awareness of how it might be accomplished. When it comes to depopulation, there are two approaches considered by the globalists:

SLOW DEPOPULATION: This method focuses on covert sterilization via vaccines, free birth control pills, and “social services” education efforts that try to convince women to have fewer children. The idea is to slowly let the current population of 7 billion die off while the birth rate plummets, causing the total population to shrink over time. You might call this the “non-violent” way to gradually reduce the population over time. Nobody has to prematurely die for this to be pulled off, in other words.

FAST DEPOPULATION: This method involves fast-kill strategies to essentially murder billions of people while blaming it on something else. The most likely candidates include the release of an aerosolized bioweapon (Ebola 2.0?), the insertion of aggressive cancer viruses in vaccines (see the confession of former Merck vaccine scientist Maurice Hilleman for background), global nuclear war, the intentional release of EMP weapons that destroy the power grid, and so on. These are obviously the more nefarious, dastardly depopulation pursuits, and they would obviously consist of global murder on a massive scale.

“Slow depopulation” methods have been tried since the 1970’s. They haven’t worked. As world population continues to rise, the global power brokers now seem to be experimenting with “fast depopulation” approaches to achieve their goal of eliminating six billion people from the planet.

Another dimension in this discussion emerges in the distinction between “deliberate” and “unintentional” depopulation.

Deliberate depopulation is, of course, the pursuit of actions and policies which are intended to directly and quantifiably reduce the number of humans living on the planet.

Unintentional depopulation is what happens when catastrophe strikes and the systems keeping modern civilization humming along suddenly collapse: a power grid failure, for example, or a runaway genetic pollution of crops that leads to global starvation. The climate change scientists insist that the release of carbon dioxide into the atmosphere will somehow cause the catastrophic collapse of society, leading to the deaths of millions or billions of people.

Accordingly, the globalists see themselves as being compassionate for humanity by invoking deliberate depopulation, thereby preventing catastrophic, unintentional depopulation (i.e. a global die-off following the catastrophic collapse of the global ecosystem). That’s how they justify covert vaccine sterilization programs, for example, or talk of eliminating six billion people on the planet. In other words, when they are murdering you and six billion of your brothers and sisters, just remember that in their own minds, they LOVE life and are protecting the ecosystem!

But how, exactly, do you go about eliminating six billion people if you’re a globalist pushing for mass murder in the name of climate science?

How do they kill six billion people? Twelve monkeys!

Killing one person is called murder. Killing six billion people is called “climate science.” But how do you pull it off, exactly?

It’s easier than you might think. As depicted in the movie Twelve Monkeys, all it takes is the release of a weaponized, genetically engineered virus in any major airport, anywhere in the world. (I’m not saying this is true because it was in a movie. That would be absurd. Rather, in this case, the movie correctly depicts the reality of how easily a bioweapon could be spread by someone with the intent to destroy human civilization as we know it.)

From there, the virus replicates and spreads globally, causing widespread death and depopulation while simultaneously empowering world governments to control their populations with medical police state powers such as forced quarantines, restrictions on travel, forced immunizations, medical checkpoints on highways and so on. (It’s sort of the perfect police state model if you think about it, and it gives governments the justification to insert medical tracking RFID chips into everybody’s bodies at gunpoint. C’mon you control freaks, you know how excited you get when you think about microchipping the population! It’s FUN!)

The U.S. military already possesses biological weapons which could kill one billion or more

It’s an undebatable fact that the U.S. military has long engineered and tested such viral bioweapons to potentially use as weapons of war. (I previously wrote about the airborne Ebola that ran wild through a U.S. Army medical research facility in 1990, killing an entire building full of monkeys before they “nuked” the building with sterilization chemicals.)

While international treaties claim such research has been abandoned, only a fool believes such hollow promises are ever kept. In reality, the research is merely shifted into covert status, continuing as normal on “black budgets.” Today, the United States government possesses viral strains which could decimate humanity in less than a year’s time… and they could be “accidentally-purposely” released anywhere on the planet without notice.

Of course, if you were going to release a deadly virus to decimate humanity (the word “decimate” means to kill 1 in every 10, by the way, it does not mean to “eradicate”), you would first make sure all your elite globalist buddies received vaccine shots against the virus. Naturally, those vaccine shots would be manufactured without any of the mercury, aluminum, formaldehyde and MSG found in vaccines given to the general public, thereby making them significantly safer. The CDC, of course, would stay completely silent on this pandemic, just as they’ve maintained absolute silence on the confession of their scientist Dr. William Thompson, who publicly admitted to taking part in scientific fraud at the CDC to hide the links between vaccines and autism in African-Americans.

The public would be left to fend for itself. And in this scenario, guess who would be most likely to survive? People who use medicinal herbs and immune-boosting superfoods. Those who are wiped out by the weaponized population control virus would largely consist of the elderly, the immunosuppressed, and the malnourished.

That might be precisely who the new “Planetary Court” world government wants to eliminate in the first place, sparing the able-bodies workers who pay confiscatory taxes to governments and produce economic output that can be exploited by the globalist corporations.

So I now throw the question back to the Pope, Professor John Schellnhuber, Bill Gates, Ted Turner and other depopulation fanatics: How exactly are you planning to eliminate six billion people from this planet?

The truly hilarious part in all this is that the world’s masses are already so totally brainwashed by climate propaganda that if you ordered them to voluntarily report to “eco-friendly euthanasia chambers” to save the planet by killing themselves, they’d line up in droves to comply! Heck, they’d buy tickets!

Interestingly, that might not be such a bad idea just to invoke the global Darwin awardand invite the world’s most idiotic, obedient sheeple to voluntarily remove themselves from the human gene pool in a sort of modern-day mass sacrifice to Gaia. The Aztecs did it, and that worked out just great! (Just ask all the Aztecs that are still around.) What could possibly go wrong?