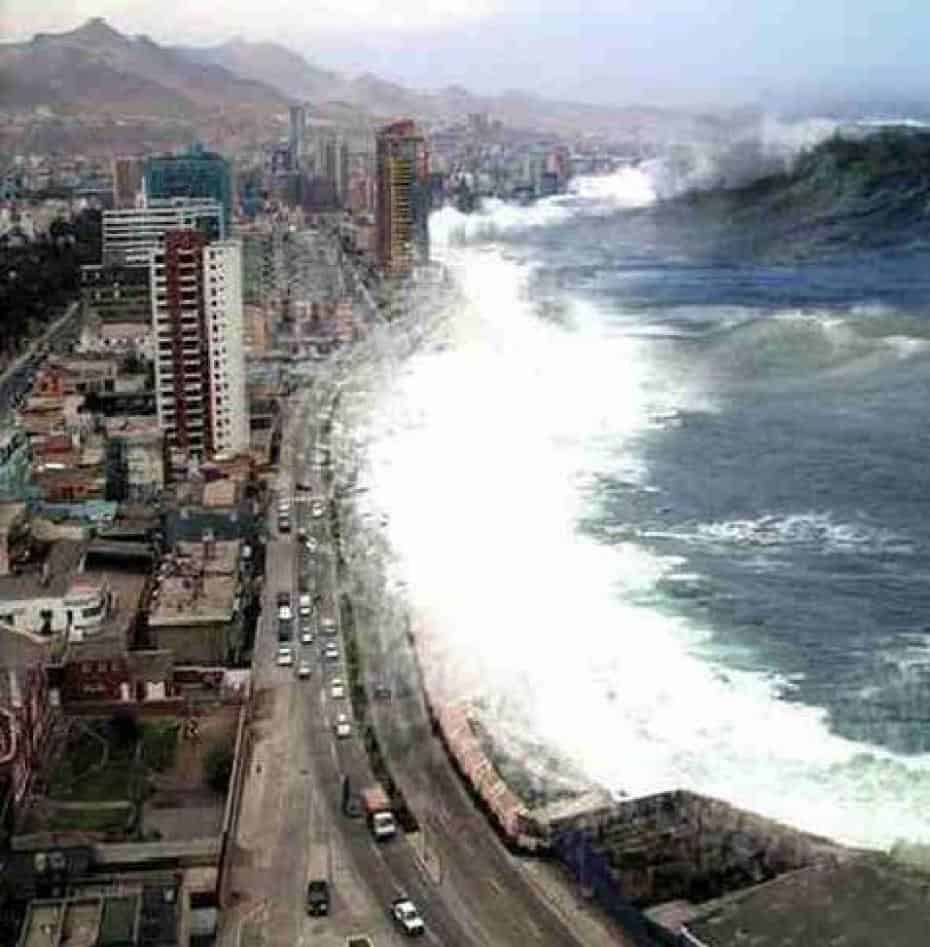 This was sent to me by a friend who feels that it very much applies to the days we currently find ourselves in. I do too.

Here is God’s Word as Pastor Nettleton of Australia shares it with us in the middle of Lent, in the world of flesh and real life, in the world of death and resurrection: a sermon after the tsunami in S. East Asia that killed hundreds of thousands.

Nine nights ago we gathered here to sing and celebrate

But all was not well with the world
A pressure was building up deep beneath the surface
Two unyielding forces were pushing against each other
And we sang on, oblivious
And others partied on
And holidayed on
Walked along moonlit beaches hand in hand
Wrapped final presents as the kids fell asleep
But underneath, the pressure grew and grew

“All is calm, all is bright” we sang
“Sleep in heavenly peace”
“Now you here of endless bliss” we sang
“While mortals sleep, the angels keep their watch of wondering love”
“We will live forever more, because of Christmas Day”, we sang
But the pressure grew and grew knowing nothing of the bliss of our songs or the angels’ watch

Nothing gave way that night, or the next
But the pressure went right on building
And the next morning all hell broke loose
It was a simple thing really
Those two great forces pushing against one another
One slipped a bit
The earth shuddered
The pressure was released
All quite simple
The sudden movement caused a wave
Quite explainable

It was all over in minutes
The water ran back into the sea taking with it whatever it wished whatever it hadn’t impaled or trapped or buried.

We’ve all seen pictures of what it left behind
Haunting horrible pictures
Mud and ruins and corpses
Tens of thousands of corpses
Old, young, men, women
The life sucked out of them
Dead children strewn everywhere
Hundreds and hundreds of dead babies

What can we say?
Who wants to sing of cute babies now?
Who wants to stand up and talk of the Word made flesh?
There’s flesh strewn all over the streets
Broken lifeless flesh
Beginning to bloat in the sun

What do those songs we were singing mean now?
Do the angels’ tidings of great joy mean anything in the face of this?
Can we stand in the mud and debris of Banda Aceh or Phuket or Galle and speak of the one who is called Emmanuel God with us?

But in the midst of the carnage and shock and horror what can we say?
There are no words
The lovely lines of peace on earth and goodwill to all sound impossibly trite and hollow

And worse still we are afraid to even speak the name of God aren’t we?
For inside there is a horrible question that we dare not face that we don’t know what to do with
It is not just that our faith seems to lack adequate words of comfort
It is that our faith is not sure that God is not to blame

What did our psalm say just a few minutes ago?
Our words of sacred scripture?
God sends the snow and frost and hail
God speaks, the ice melts
God breathes, the waters flow
That’s what it said

Those who shake their fists at heaven and say that either there is no God or that God is a callous tyrant have got irrefutable evidence on their side this week
Perhaps every week
Even if God didn’t directly make the tsunami doesn’t God have to accept responsibility for creating the things that create tsunami?
Or is God somehow exempt from manufacturer’s liability questions?

Another preacher rang me up on Thursday he needed to know that he wasn’t the only one
with a head full of horror wondering how to preach the gospel this week It’s lonely, he said, being the one who has to find words to say
Impossibly daunting too bearing the responsibility of preaching the gospel in a week when the news of the world seems to make a mockery of it
It struck me that we preachers should probably feel like that every week charged with the responsibility to speak the word of God to a desperate people in a world that seems always capable of proving our every word a lie

Here is the gospel, the faith of the Church
Is there life in it yet?
Or has it drowned in the angry wave of awful reality?
I’m not sure but dead or alive I still love this child

I can’t speak to you as one who has the answers
Like you I am looking for signs of life amidst the chaos and devastation
But I can and must speak as one called by God to interpret what God says in the face of all this
So what does God have to say?
What word am I to interpret?

God, are you all-powerful?

“Jesus”
God, do you care?
The Word becomes flesh

God, did you make the tsunami?
The Word becomes flesh

God, where are you?
The Word becomes flesh

Because God has spoken a Word and it hasn’t charged in like the cavalry
God has spoken a Word and it did make the world shudder
The Word became flesh and the world shuddered and a great wave of hostility and selfishness and bitterness rose up and flung itself against the Word devastating all in its path killing even children in its rage, snarling, surging, seething, smashing a great wave of darkness furiously seeking to annihilate the light

And where was God as the wave hit?
Wasn’t God right there bearing the brunt of it
Wasn’t God there clinging to his beloved child only to be overwhelmed by the wave and have the child ripped from his arms and torn away on that surging flood of hatred – and battered and smashed and pierced and tossed, limp and lifeless to the earth

Do I have any idea what it would really feel like?
I doubt it
It was bad enough just imagining it
I don’t know how I’d cope if it [were] real
I certainly wouldn’t want to be hearing any comfortable clichés like all things working together for good or they’ve gone to a better place

And although our story of the Word made flesh does not stop with dead and buried, we will not really understand the rest of the story if we think of resurrection as just some kind of miracle cure which means that death is no longer part of Christ’s reality

If you want to see what God has to say in the face of this go walk among the ruins of Banda Aceh or just turn on your TV
for God is speaking, and the Word has become flesh

Perhaps as we begin to see what God is saying we will begin to comprehend how blasphemous so much of what we blithely say about God really is, and how chillingly we treat powerful and dangerous realities as casual and comfortable little things

Perhaps when we hold out our empty hands to receive the piece of bread we will be offered shortly, we will recognize something of our solidarity with desperate hungry people holding out empty hands for the food aid the world is trying to muster
And perhaps we will see in those images of the Father holding the limp body of his dead child, the image of the Father who spoke the Word that becomes flesh and whose grief and suffering take flesh still in body and blood offered for the life of the world and placed into our empty hands that we might live even in the face of death

And perhaps when we have heard that Christmas story, the story of God speaking a Word which becomes human flesh, and falls victim to the full force of the waves of horror that assail the earth and its inhabitants, a Word which continues to take flesh in all the suffering and grief and desperation, perhaps then we will be capable of hearing the story of resurrection and recognizing that our songs of endless bliss and our promises of sorrow turned into joy are reduced to pious platitudes if they are not seen in their contexts of unspeakable fear, death and anguish

I pray that we and I might have the courage and compassion to recognize the Word that God speaks this week and follow where the Word calls – into the places that terrify and horrify us – the places where we will know what it means to cry out for salvation – the places, perhaps the only places, where we are capable of knowing the Word of resurrection, the Word made flesh, the Christ born of Mary

In the Name of God, Father, Son, and Holy Spirit. Amen.