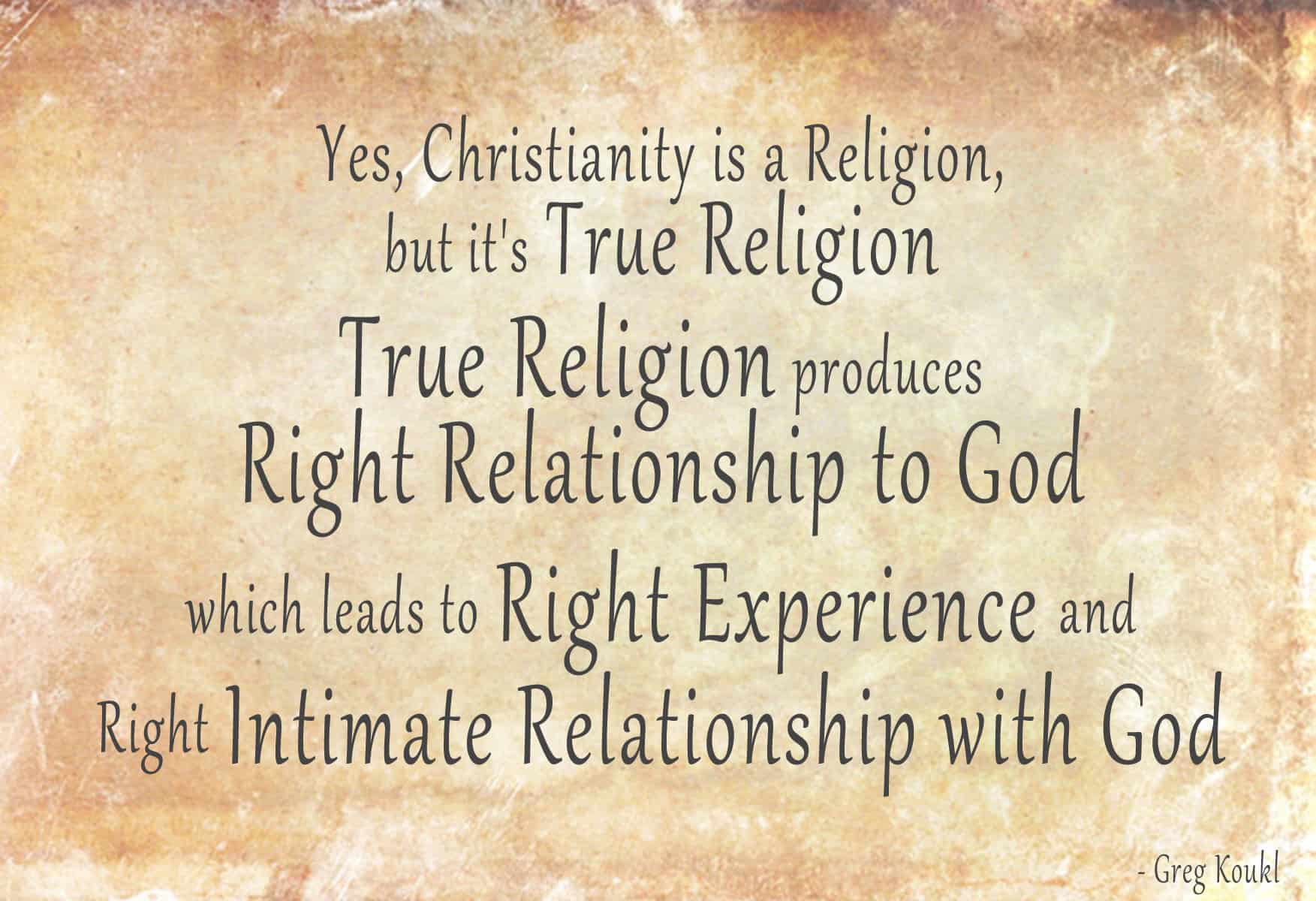 Greg Koukl comments on the often-used phrase “Christianity is not a religion; it’s a relationship.”

I’d like to pick up today where we ended yesterday. The last call mentioned that Christianity is a relationship, not a religion. Jesus practiced a relationship with God the Father and then offered that to us. The Jews offered religion; Jesus was different.

First, we ought to walk softly in condemning the religion of the Jews. By and the large, the religion the Jews practiced was the religion that God had given them. It wasn’t religion itself that was the problem. It was something else, something that makes the offer of relationship with God appealing in contrast to what seemed like the empty rigors of religion and ritual.

This slogan has been a rallying cry of 1970’s and 80’s evangelicalism. The emphasis on having “a relationship with God,” I think, is a new phenomenon coming out of the sixties. It smacks of T-groups and sensitivity training, emphasizing freedom and feeling rather than form and content.

The crux here is what is meant by the words “religion” and “relationship.” If “religion” means a body of truth pertaining to God and the afterlife and the unseen world, combined with a way of life informed by that truth, and a community of faith seeking to follow that way of life, then Christianity certainly is a religion.

But I understand the motive behind the distinction. Christians meant to combat the notion that liturgy and doctrine captured everything that Christianity was about. Young people in the 60’s had grown up in the church dutifully practicing religion in this sense, yet having no reality of God in their life at all. That was my experience.

And I think this distinction is very helpful in that sense. When we tell someone about Jesus–as my younger brother Mark did with me–we’re careful to distinguish what we’re offering from what they had in the past. “No, it’s not like that,” we say, “not all those rules, all those do’s and don’ts, all that religion. This is a relationship.”

Yes, it’s a very valuable distinction, but at this point we have to be very careful not to mislead by replacing one error with another, equally as bad. The fact is, Christianity does have rules, it does have do’s and don’ts. It is a religion. But it was never meant to be just information, and that’s where this slogan touches on truth.

When you read the New Testament there simply isn’t any rift between accurate knowledge aboutGod and profound experience of God. In fact, the second depends on the first, as I’ll point out in a moment.

Classically, true knowledge of God necessarily entails the experiential. A man knows his wife well not just because he can rattle off a series of facts about her (even a stranger can do that), but because he’s deeply acquainted with her person on a day to day basis. Yet even so, there have been periods in the history of the church when true knowledge of God has given way to mereinformation about Him–a dead scholasticism of sorts.

Following the spiritual vitality of the Reformation came a period of high orthodoxy. It was characterized by very elaborate systems of theology which, for some, replaced knowledge of God (along with spiritual intimacy) with mere information about Him. The pietistic movement was a reaction to this. But it didn’t mend the breech. It just substituted one extreme for the other. True spirituality came to be defined not by right knowledge of God, but by profound and intense experience of the mystical. (Notice I didn’t say “experience of God,” but rather “experience of the mystical.” Much of pietistic experience–then and now–never includes God at all, because it’s not informed properly by truth.)

So I understand how there could be a perfunctory religious practice without any life in it that would cause one to hunger and yearn for something much more personal. And the offer of relationship touches that hunger.

But here’s the problem: “having a relationship with God” in this sense is not at all unique to Christianity. Virtually every religion, it seems to me, has as its goal something intensely personal.

And this is why this distinction actually weakens our message if we’re not careful. It’s a version of “try Him you’ll like Him.” People can easily say, “No thanks, I’m trying something else right now and I like that just fine.” In fact, that’s been the response I’ve frequently gotten when I’ve offered Christianity to a non-believer with the appeal that it’s not religion but a relationship. Their response: “I’ve already got a relationship with God, thank you.”

The core of the Gospel isn’t having a relationship with God, but being rightly related to God. The prepositions are absolutely critical here. Another way of putting it is you must have peace withGod before you can have the peace of God, and there’s a profound difference.

In Romans 5 the first verse, Paul makes this important statement: “Therefore having been justified by faith, we have peace with God through our Lord Jesus Christ, through whom also we have obtained our introduction by faith into this grace in which we stand; and we exult in hope of the glory of God.”

There are two kinds of peace in the New Testament, ladies and gentlemen. First is the feeling of peacefulness. It’s mentioned as a fruit of the Spirit in Galatians 5:22, and is the feeling that guards our hearts and minds after prayer that Paul talks about in Philippians 4:6-7.

The second kind of peace is the cessation of hostility between two parties. Nations at war declare a truce and then enter into a period of peace. They’re not fighting with each other any more.

This, by the way, is the meaning of “peace” that’s in view in the frequently misused passage, Colossians 3:15 where Paul says, “And let the peace of Christ rule in your hearts.” This is not a peaceful feeling that’s meant to guide you in figuring out God’s will. Paul is saying that the Christians in Colossae should quit fighting. Instead they should, as he mentions in the verse just above, be “bearing with one another, and forgiving each other, whoever has a complaint against anyone.”

This is also the sense of “peace” that Paul is speaking of in Romans 5. Jesus introduces us, by faith, into God’s grace ending the conflict between us and God. In short, Paul is saying, “God is not angry with us anymore.”

Do you realize that? Do you know that God is not angry with you anymore, that through Jesus we’re at peace with God, that the war is over? Think about it a few moments. Chew on it a little. The war between you and God is o-ver. God’s not mad at you anymore. Isn’t that a wonderful truth! How does that make you feel? This is such a profound reality that when it sinks in it produces something wonderful. Paul goes on to say that the resulting exultation in hope allows him to face his tribulations with joy.

Do you see how the two begin to work together, right knowledge and experience? This is a perfect example of what I mentioned a moment ago that accurate knowledge about God is the foundation for profound experience of God. Paul knows that the enmity–the hostility- -between He and God has been destroyed through the forgiveness that’s in Jesus Christ, and this producesexultation.