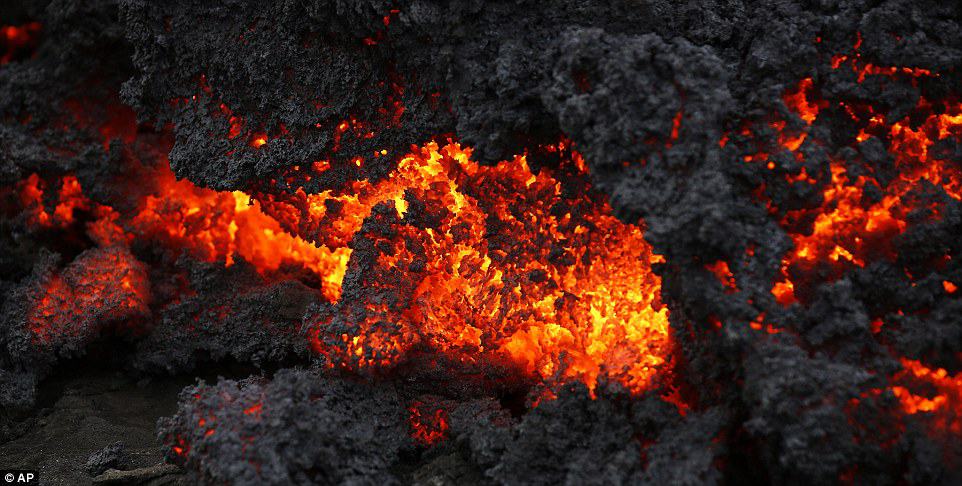 Bardarbunga Volcano in Iceland has been erupting in an ‘on and off’ fashion over the past week.

The eruption, originally began as a subglacial event, coupled with dozens of 4.0M to upper 5.0M earthquakes which have moved with the underground flows of magma.

Now, September 3, 2014.. the fissure which formed near the volcanoes caldera has grown in size, producing flowing rivers of lava, spreading across the area.

Over the past week, first a fissure formed.. producing impressive daytime lava fountains..

Above: Day 2 of the eruption, last 2 days of August 2014 a fissure formed near Bardarbunga’s caldera

Nighttime shots show the actual spreading of the fissure much better…

Above: September 1 2014, A nighttime view of the new volcanic fissure at Bardarbunga Volcano

Terra MODIS satellite image of the eruption north of Vatnajokull in Iceland peaking through the cloud cover. Seen on August 28, 2014. NASA

” RUV.is (Icelandic geologic agency) is reporting that three small explosions occurred in the area just north of Vatnajökull. The nature of the explosions are unknown at this point, but from the rough translation of the article in Icelandic, they sound an awful lot like a phreatic explosion — that is, explosions driven by steam. If magma is directly involved, they would then become phreatomagmatic. In both cases, it could be a case where intruding basalt is interacting with saturated sediment at the edges of the Vatnajökull. This area is likely going to be saturated with water from the seasonal melting of the ice sheet itself, so explosive interactions between this wet sediment and basalt might be expected. The resulting mix of sediment and lava is called a peperite. UPDATE: Although likely unrelated to today’s mysterious explosions, there could be a chance for phreatic explosions if/when the lava flow reaches Jokulsa River.

Not much can be seen in the webcams right now, beyond the abundant degassing from the active fissure zones in the Holahraun lava fields between Askja and Barðarbunga. The new fissure that opened Sunday has produced some impressive lava fountains, some reaching 200 meters (650 feet). The lava flow that is issuing from the new fissure is made of slabby pahoehoe, a flavor of basaltic lava that is transitional between pahoehoe and a’a. You can see some video of the lava flows here and a great flyover of the fissure and lava flow.

Overall, the Icelandic Meteorological Office is reporting that seismicity is down over the last day, along with the rates of deformation seen in the area. It is interesting to note that this earthquake swarm has now progressed past Askja to the north (see right), with a bit of a “blank zone” under Askja. The eruption itself is also waning since the intense activity of Sunday and Monday. However, as we saw last week, if this fissure stops erupting, new ones may open — potentially related to the explosions reported today. The lava flow now covers about 4.2 square kilometers. The sulfur dioxide plume from the eruption is also prominent around Iceland and the North Atlantic, but it seems that much of the minor hazard due to the plume is localized to Iceland. You can read some more about the gas plume in this Daily Kos article, but be wary of the doom-and-gloom.

If you can’t make it to Iceland right now, be sure to check out the amazing collection of images from the eruption by Einar Guðmann.