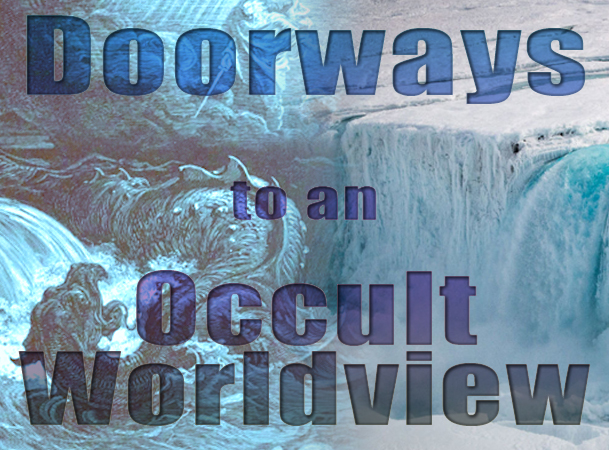 In Antarctica: A Closed System and a Very Deep Rabbit Hole, Paul Zietsman argues that the purpose of geoengineering is to delay the melting of the lake of fire (which he believes is located under West Antarctica) until the Fallen Angels can find a way “to deal with God.” He chiefly supports his premise with passages from the book of Enoch and his theory on how geoengineers are accomplishing this goal, and he tosses in the cover of a 1938 book by Admiral Byrd which appears to depict chemtrails.

The book cover is puzzling. I’ll give him that.

But let’s back up and start with the original idea that all of this is based on:

This image has made the rounds on social media. It shows a melting Antarctic with a frozen pyramid in the background. 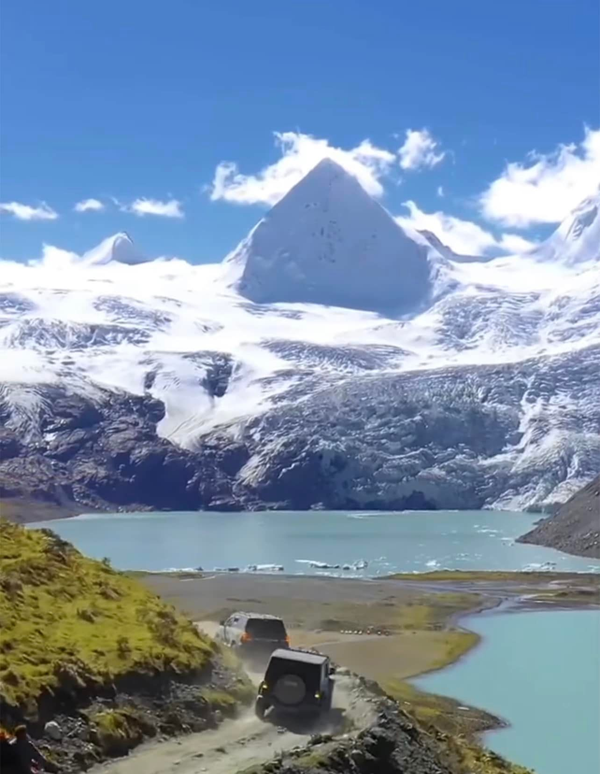 Looks convincing. But since we can’t go to Antarctica to see for ourselves, we have nothing to go by but what the “experts'” tell us.

And what are the “experts” saying? Well, a search for “Antarctica melting” produces several reports of a “Doomsday Glacier.” Here’s one from CNN:

According to CNN  west Antarctica is melting and the much greater portion of the “continent’ is experiencing record cooling.

It’s hard to see what’s really happening on the “globe” model of earth. Now, again, I don’t believe we have a fully accurate world map, but I do believe the Bible tells us earth is a circle, not a rotating ball.

It is he who sits above the circle of the earth, and its inhabitants are like grasshoppers; who stretches out the heavens like a curtain, and spreads them like a tent to dwell in; (Isa 40:22)

Thou didst set the earth on its foundations, so that it should never be shaken. (Ps 104: 5)

When he established the heavens, I was there; when he drew a circle on the face of the deep, (Prov 8:27)

So I took the (left) image above and used Photoshop to spread it out onto a flat earth map. I figure the volcanoes are would roughly be spread out like this: 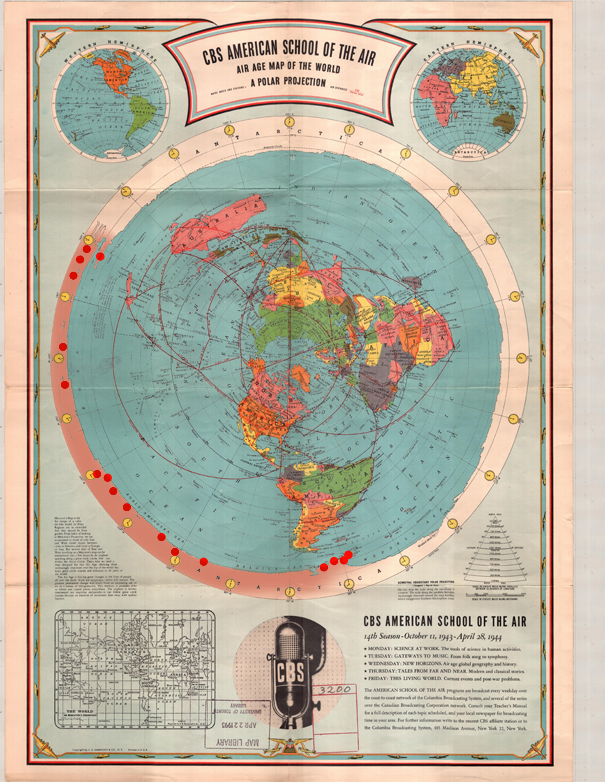 The areas of Antarctica that are warming, “West Antarctica”  and the Antarctic Peninsula, would complete what we know as the “Pacific Ring of Fire.” I wonder why it’s not presented that way on any maps. 🤔 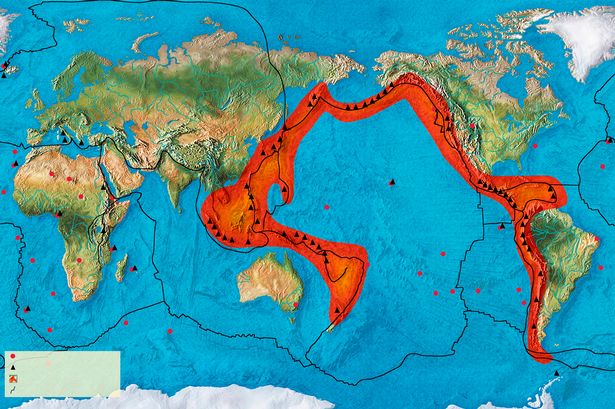 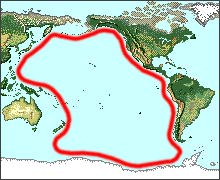 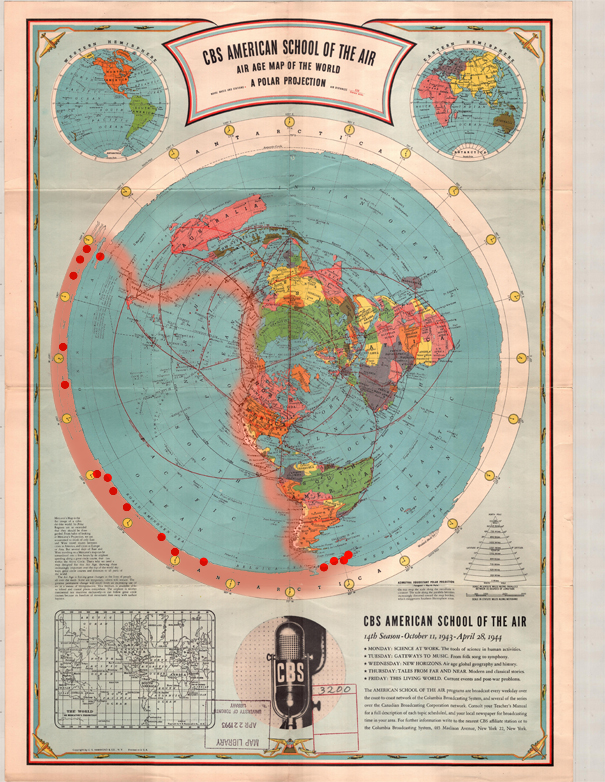 This calls Zeitsman’s conclusions to question, since according to his article, the “west” and the “lake of fire” should be located off the southern tip of South America (the Antarctic Peninsula). 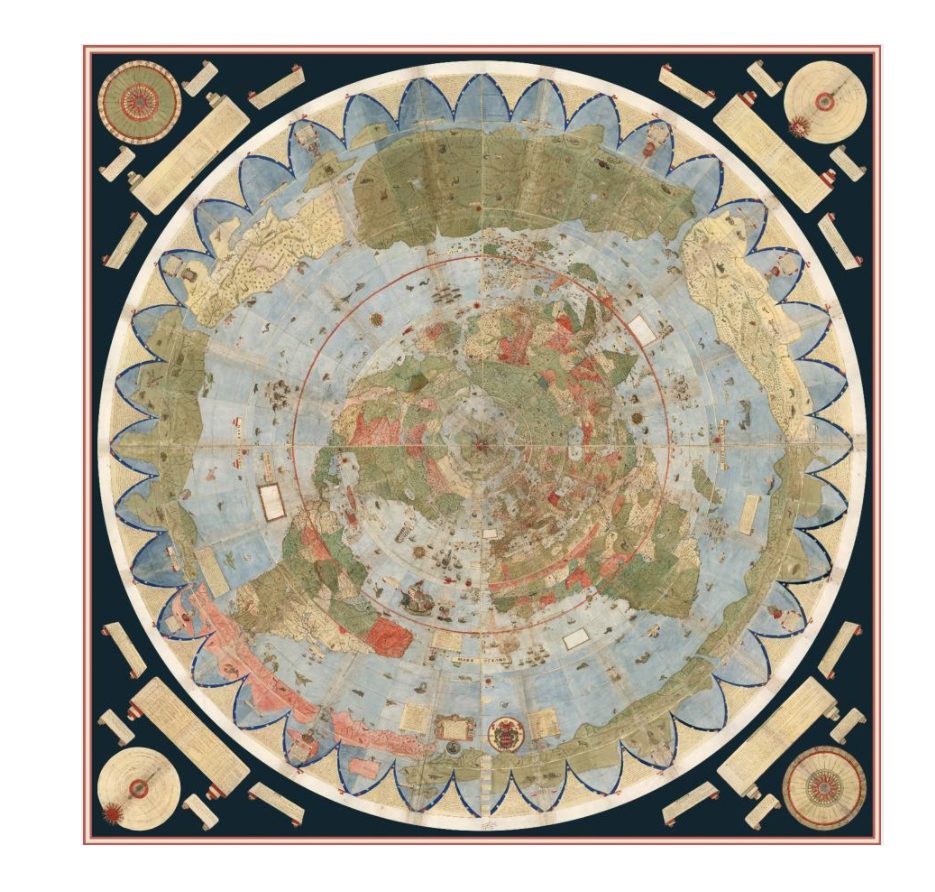 So, the bottom line is that there is no “Doomsday” melting that we need to turn to the book of Enoch to interpret for us, nor is it an explanation for geoengineering!

But what’s much more important is that Zietsman’s article turns to a mystical book which is not scripture for information that’s not given to us in the Bible. More important than whether or not the climate is changing or glaciers are melting, more important than curiosity about what the elites are doing in bases under the ground in Antarctica, is what we stand upon as spiritual truth.

“This earthly domain is the only realm that the enemy has any power in!”

The reason the church is being lured (sadly, quite successfully) into embracing Enoch as a “hidden” book that has supposedly only now came to light to guide us in this time, is that the real battle is over our mind, our perception, our faith. Enoch is popularly being used together with the Bible today to “shed more light” on areas where scripture is silent. Its popularity is part of what we can call the “light occult” or what I’ve also referred to as a “gnostic awakening.”

In Enoch we are presented with God as “the Lord of Spirits” engaged in a battle with the fallen ones. But the narrative is a physicalized one (that notably blames man’s problems on the activity of fallen angel’s rather than his own sin). The occult worldview is always physicalized since this earthly domain is the only realm that the enemy has any power in! The church has subtly been lulled into a physicalized interpretation of Bible prophecy through Dispensationalism/Futurism, which prepared the soil for its acceptance, not only of physical bloodline/political Israel but of supposedly “lost” mystical texts like the book of Enoch.

Zietsman’s argument depends on mystical texts/Jewish fables, and his conclusions cannot be reconciled with scripture.  He also presents the familiar arguments we hear from proponents of the book of Enoch; that the fallen ones “Watchers” are working to:

“Corrupt the seed (genetics) so that there will be no mankind for Christ to return to (a person that has been genetically modified is not human anymore – this has been the agenda before the flood; and it is the same today).”

This is found nowhere in scripture. Rather, Jesus’ question was “When the son of man comes will he find faith on the earth?” (Lk 18:8)

“Build super armies, super soldiers and super weapons; in order to prepare for their final showdown, when they amass all their fantastic military power in the great plain of Megiddo, to make one final assault when Christ returns on a white horse, followed by the armies of heaven. (By this time the lake of fire will be fully ready to receive the beast and the false prophet. The rest will join them later.)”

This is completely unscriptural, and based in a literal Dispensational interpretation of prophecy.

Like all teachings that come from extra-biblical texts, these views lack a basic understanding of New Covenant Christianity; the current spiritual state of man as he tabernacles in this fallen world. Instead he turns to an occult text for insight, indeed to the very script* the enemy has laid out for the rulers of this world to follow. When Christians follow this view they end up deceptively “wondering after the beast” into another gospel rather than walking out the spiritual life we’ve been given here in the flesh until the great day of the Lord when the elements will melt and all things are made new.

*Did you know that the occult holds the book of Revelation in reverence, claiming that it is of gnostic origin? Manly P.Hall even calls the book “the most important book in Freemasonry.” (see Hall on Revelation). The occult has usurped the book with its symbolism and given it a gnostic reinterpretation, using it as a script, which is how they make it appear that prophecy is being fulfilled according to their narrative. But in reality, only the Holy Spirit can “unlock” the prophecies found in the book. (To study it properly, the key is to compare Scripture with Scripture.)

So, why is the occult so interested in Antarctica?

According to Antarctic explorer Admiral Byrd, the land, which has been off limits to the public since 1959, contains a wealth of precious minerals. 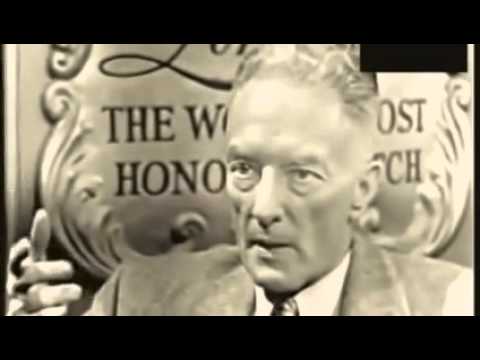 This claim is also found in the book of Enoch.

If there is such great wealth in Antarctica, wouldn’t we expect to see massive mining efforts and shipping routes to exploit those resources? Byrd’s excuse for making the area off limits is that there is so much wealth there that NO nation should be able to lay claim to it. Now I’ve lived in this greedy world long enough to call that what it is: Nonsense! I think it’s much more likely that, being a 33rd degree Freemason, Byrd was citing his occult belief of he and his ilk (a belief that is being reinforced to Christians through the gnostic/mystical book of Enoch).

There is ample evidence that the elites have been going to Antarctica for generations now. Christchurch, New Zealand reportedly has it’s own special terminal for the elite who are making their mysterious excursions. Recently a Tweet was published just before a recent “COVID outbreak” in Antarctica about a special meeting there that would “change everything.” Just the other day, Express posted an interesting report about warm underground caves created by steam from the volcanoes. 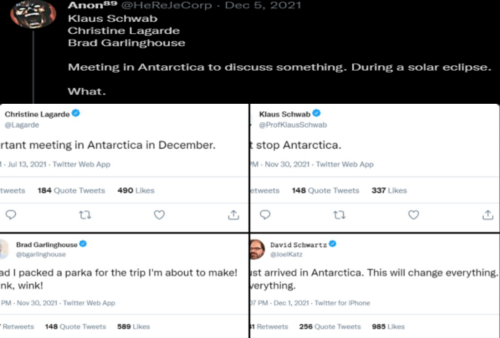 There is definitely something mysterious going on in Antarctica. It’s tempting to spend countless hours reading about underground bases, Operation High Jump and Operation Fishbowl, aliens/demons/ “Watchers,” massive underground bases with an artificial sun, Antarctica being the lost antediluvian world-center of Atlantis… you name it. I read through quite a bit of this stuff in my research for this series and came out with more questions than answers. But that’s the trademark of the occult isn’t it? Deeper and deeper it sucks us in to “wonder after the beast” instead of being good Bereans and carefully studying God’s Word. If the world is short on anything today it’s good Bereans (Acts 17:10-11), not occult experts.

Whether or not the world rulers actually believe some of these occult prophecies, it’s clear that they want us to believe them. They have put great effort, using any means possible into indoctrinating the church into those beliefs. Their “Variant Islands” and topographical “serpent” in the sea serve to further that intrigue and indoctrination. Friends, don’t buy it. I will go as far as to say that I believe the fascination with Antarctica has everything to do with it being at the “ends of the earth,” and as such, it has the potential to put the final nail in the coffin of occult Copernican cosmology. But beyond that, it serves no other purpose but to entice people into an occult worldview.

Keep watch and hold on tightly to the truth!

Let us hold fast the confession of our hope without wavering, for He who promised is faithful. (Heb 10:23)

BTW, here’s an excellent resource for a scriptural view of the book of Enoch. (Thanks Petra for finding this!)