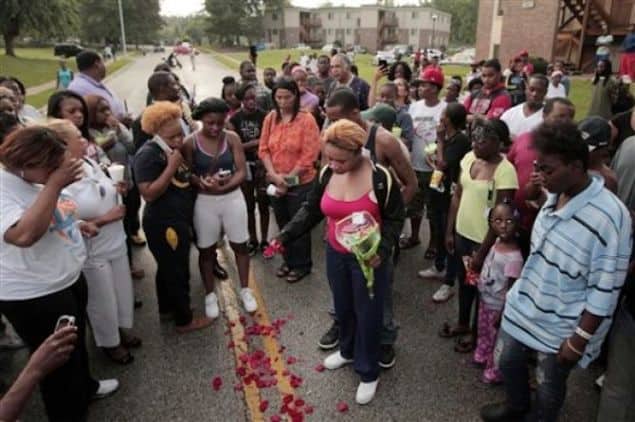 Anonymous, the hacktivist network, released a video message Sunday encouraging protests and threatening their own actions against the police who shot 18-year-old Michael Brown and left him for dead in the streets of Ferguson, Missouri.

“The entire global collective of Anonymous is outraged at this cold-blooded murder of a young teen,” the group said in the video. “Not a week goes by that some young person— usually of minority ethnicity—is slaughtered by murderous police in the USA.” Brown, who was black, reportedly had his hands up before he was shot “more than just a couple” times by police Saturday, according to the local force’s chief.

Saying it wasn’t enough to “simply [obtain] justice for this young man and his family,” Anonymous demanded that the state’s congressional representatives introduce a national set of police conduct standards and call it “Mike Brown’s Law.”

The group also demanded that police treat protesters with respect, vowing that any abuse would lead the group to “dox and release the personal information on every single member of the Ferguson Police Department.”

“This is your only warning,” Anonymous stated.

The group has set up a website to organize cyberprotests on Brown’s behalf and is using the hashtag #OpFerguson. As of this writing, the group’s Twitter account had been suspended.

Here is the complete text of Anonymous’ message, much of which is repeated in the video above:

A little over 24 hours ago in Ferguson, Missouri – USA the Ferguson Police Department shot an un-armed teen 6 times and killed him. His body was left to lie in a pool of blood in the sweltering heat for hours while the police militarized the area against protesters and attempted to concoct a reasonable story as to why they snatched this innocent students life for no reason. The St. Louis County Sheriff Department even sealed the roads leading to Ferguson in a vain attempt to prevent protesters from reaching the city. His name was Mike Brown, he was 17 – and he would have started college next week. Instead, his family is struggling to come up with funeral costs.

The entire global collective of Anonymous is outraged at this cold blooded murder of a young teen. Not a week goes by that some young person, usually of minority ethnicity – is slaughtered by murderous police in the USA. For this reason Anonymous will not be satisfied this time, as we have in the past – with simply obtaining justice for this young man and his family. Anonymous demands that the Congressional Representatives and Senators from Missouri introduce legislation entitled “Mike Brown’s Law” that will set strict national standards for police conduct in the USA. We further demand that this new law include specific language to grant the victims of police violence the same rights and prerogatives that are already enjoyed nationwide by the victims of other violent criminals. The Equal Protection clause of the US Constitution demands nothing less.

To the good people of Ferguson, take heart – and take your streets. You are not alone, we will support you in every way possible. Occupy every square inch of your city. Open your homes and help in any way you can the protesters who will come to your city from every part of Missouri and the USA. Businesses and householders that are near protest rallies, open your WiFi routers so that live streamers and other independent journalists can use the Internet connections. Feed each other, keep each other safe – and stay in the streets until we are totally victorious in all our demands.

To the Ferguson Police Department and any other jurisdictions who are deployed to the protests: we are watching you very closely. If you abuse, harass – or harm in any way the protesters in Ferguson we will take every web based asset of your departments and governments off line. That is not a threat, it is a promise. If you attack the protesters, we will attack every server and computer you have. We will dox and release the personal information on every single member of the Ferguson Police Department, as well as any other jurisdiction that participates in the abuse. We will seize all your databases and E-Mail spools and dump them on the Internet. This is your only warning.

The time has come for more than simple justice for these atrocities. The time has come to draw a line in the sand and say “no more dead kids”, no more police killings and beatings. Anonymous is drawing a line in the sand, and that line runs right down the middle of Main Street Ferguson, Missouri. Police impunity ends with the barbaric death of Mike Brown.
We Are Anonymous – We Are Legion – We Will Not Forgive – We Will Not Forget.

A day of protests and vigils Sunday over the death of Michael Brown, a black teenager who was killed following an altercation with a Ferguson police officer, turned violent overnight with reports of riots and looting.

A gathering of mourners at the shooting site Sunday night for Brown, 18, who was to begin his first day in college today, quickly turned violent as people struggled to understand how police could shoot an unarmed teenager in broad daylight.

“We are currently experiencing a riot,” a Ferguson police dispatcher said.

The sound of gunfire was reported in the neighborhood late Sunday. 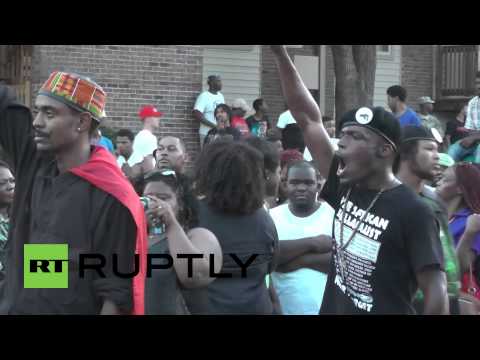 About 150 officers in riot gear from throughout St. Louis County, along with canine units and a SWAT team, were sent to the area, a dispatcher for the St. Louis County Police Department said.

Hundreds of demonstrators – as many as 1,000 at the peak of the protests, according to police – gathered at the site of the shooting on Saturday, some of them shouting “Kill the police” and “Don’t Shoot,” a county police spokesman said, as quoted by the Chicago Tribune.

There was no immediate word on injuries.

Although authorities are still investigating the incident, St. Louis Police Chief Jon Belmar said a struggle between Brown and a police officer somehow ensued inside of a police cruiser.

“It is our understanding at this point in the investigation, that within the police car, there was a struggle over the officer’s weapon,” Belmar told a news conference on Sunday.

Police cruisers in Ferguson, a town of some 23,000 people, are not equipped with dash cameras, which would have proven valuable to investigators, nor are there surveillance cameras at the apartment complex where the incident occurred.

Police officials will be hard pressed to explain why the victim was reportedly shot eight times in the course of the altercation.

Brown’s mother told local TV channel KSDK that her son was ready to go to college and was visiting his grandmother when the incident took place.

“He didn’t bother nobody,” she said. “They told me how many times my son was shot – eight,” she added.

The officer involved in the incident, who has not been identified, has been described as a six-year veteran and has been put on administrative leave, Belmar told reporters.

The shooting has brought to the surface lingering tensions between “black residents of North County and a predominantly white Ferguson police force,” the St. Louis Post-Dispatch reported Meanwhile, officials have not disclosed the race of the police officer who killed Michael Brown.

St. Louis Mayor Francis Slay tweeted Sunday saying he stands with County Executive Charlie Dooley in his call “for a full and open inquiry into yesterday’s shooting in Ferguson.”

Meanwhile, Americans continue to debate exactly what is it about their society that makes such incidences increasingly commonplace. Sahar Aziz, Associate Professor of Law, told RT that part of the problem stems from US police approaching problems from an “egotistical” perspective.

“I think much of the brutality comes from a cultural problem where police officers have an egotistical approach and a power structure where they can get away with almost anything because they are ‘the police,’” she said. 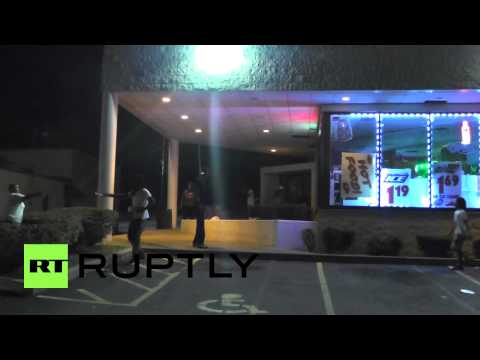 The St. Louis County office of the civil rights group NAACP has said it wants the FBI to examine the case, with many in the community telling media that police in too many incidences use racial profiling when confronting individuals on the street.