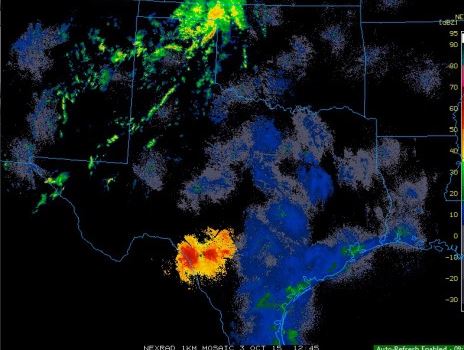 A review of the actual NEXRAD RADAR feeds show some very interesting activity taking place from this military base weather RADAR.

Below is an animated GIF from the NWS RADAR feed  (18mb file size):

The powerful microwave energy pulses from the RADAR station caused electron cascade (stripping of electrons) in the atmosphere.

This electron cascade process is proved to cause plasma heating in the atmosphere reaching above multiple hundreds of degrees.   Additionally, the ions which are stripped can produce MOISTURE condensation (CCN – Cloud Condensation Nuclei) which is the precursor to rain formation.

The plasma which formed from the electron cascade also reflects RADAR microwave signals like a mirror in the sky — thus the large “clouds” of stripped electrons actually reflect back the same RADAR signals which created the cascade to begin with.

As the electrons are stripped, the electron cloud grew, ultimately reflecting MORE energy as the intensity of the pulses induced the process further.  The precipitation return grew exponentially higher as the pulses continued — producing well over 20 inches of detected rainfall.

Notice below, how the rainfall amounts flare up each time the pulses occur. See the numbers on the right hand side of the screen grow exponentially larger as the electron cloud flares up and reflects BACK the signal  !  Amazing!

View of the storm total precipitation detected by the RADAR:

Here is a view of the 1-hour storm total precipitation:

If we review the VIL (Vertical Integrated Liquid) information from this NEXRAD RADAR energy pulse, you will see the VIL starts at near nothing, and then as the plasma cloud grows, the reflected “liquid” also begins to grow.

As the pulses stop, the “liquid” disappears — again proving this is electron cascade NOT real precipitation like “rain”.

People might be very surprised to find out this is not real rain. Even though RAIN and HAIL do indeed show up on the Hydrometer Classification, nothing is physically there!

The Hydrometer classification shows heavy rain, and large hail returns off the clouds of energy in the atmosphere.

Finally, a review of the “Echo Tops” of the “storm” (a storm that isn’t physically there) shows what we all know to be a very large RADAR pulse — slang termed “HAARP RING”.