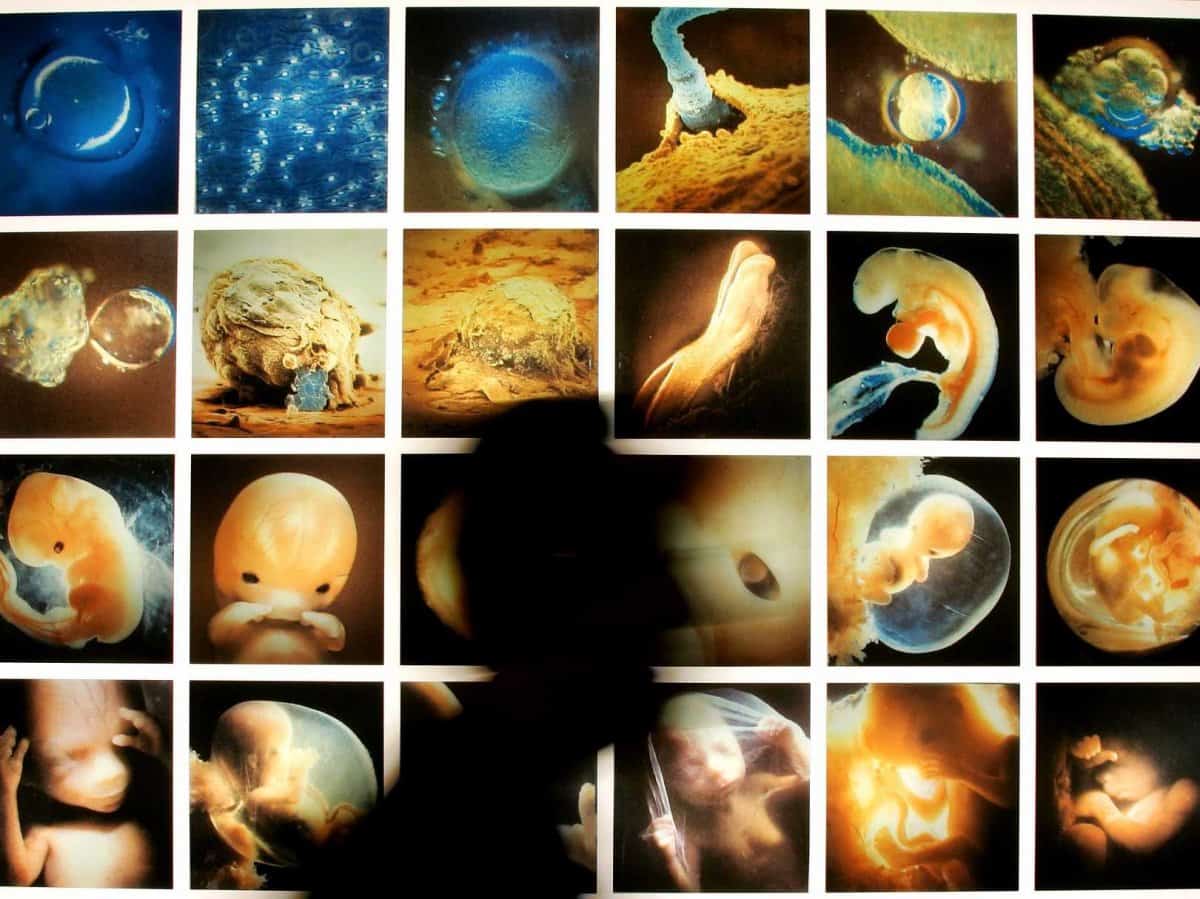 Doctor is silhouetted as he walks past a poster in a Rome fertility clinic.

Once again we find that science fiction has become science reality. If you or people you know brush off the idea of manipulating human DNA as “stuff you see in the movies”, you may want to watch this and read on. 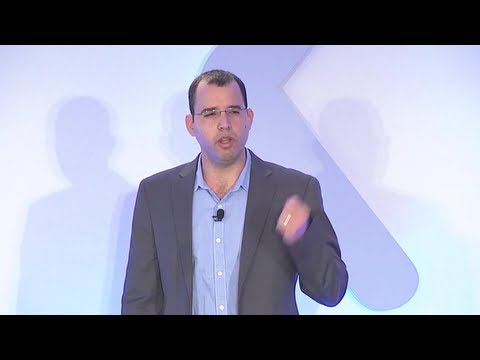 “The technological advances today are moving the human race toward  a trans-humanist future. While those advances are exciting and are a testament to the genius of man, they are leading us over a genetic cliff. God said everything is to reproduce according to its own kind. Splicing different kinds of biological code will most certainly end poorly. I like technology and sci-fi, however, what is happening in our today, in my estimation, are giant steps towards the mark of the beast.”
– Doug Hamp

Life may be the software that makes its own hardware, but where is the compiler? If we plan to start programming life itself, we are going to need a radically different and better tool kit than the one available to geneticists today. Omri lays out a concrete vision for how such a tool would work and for how it would be used to create the bio-products our future needs so badly.

In an analogous way, Amirav-Drory wants to create a graphic user interface that would empower people to manipulate the arcane logic of DNA. His new software, Genome Compiler (free and available for download at www.genomecompiler.com), converts the various parts of a DNA sequence into easy-to-understand, and easily manipulable, icons. The software turns the complex task of DNA design into an easy drag-and-drop exercise. Read more…

Omri is the founder & CEO of Genome Compiler Corp, a Synthetic Biology venture. His background is in biochemical and structural studies of membrane protein complexes involved in bio-energetics.

Jesus told us that the last days will be like the days of Noah when fallen angels mixed their seed with humanity. In the book of Daniel we read that they will again mingle with the seed of men. That day of fulfillment is now.

News broke on Wednesday that a team of Chinese scientists had edited the genes of human embryos for the first time ever, confirming long-swirling rumours that such ethically dicey experiments were underway and flouting recent calls to put a stop to them.

Yet despite researchers urging caution — stating that this work needs to be “on hold pending a broader societal discussion of the scientific and ethical issues surrounding such use,” an inventor of the technology that made it possible told National Geographic — it seems that while the Chinese scientists ruffled some feathers, they did not actually break any laws.

Around the world, the laws governing what’s allowed when it comes to “editing the human germ line,” the technical name for what the Chinese scientists did, are a mixed bag.

In a study published in 2014, Motoko Araki and Tetsuya Ishii of Hokkaido University in Japan looked at the rules in 39 countries and found that 29 of them (lighter pink on the map below) had a ban on such research. Of those, 25 (darker pink) had legally binding bans; the other four, including China, had guidelines banning the practice but not exactly enforceable laws. In the remaining 10 countries (dark grey on the map), the rules were “ambiguous.” They set aside the US as a special case: no outright ban, but rules that are very restrictive. (The FDA and NIH have, at least for now, a moratorium on such research.) The fact that the first published research showing the editing of an embryonic genome — an attempt to alter the DNA that would be passed on to future generations — happened in a country with an ostensible ban on such research should raise some alarm.

The complex regulatory environment that’s clear on the map above means there are plenty of loopholes — even in the countries that have tried to anticipate the coming wave of ethically questionable experimentation.

Was this research allowed?

There are at least two possible reasons the Chinese team, led by Junjiu Huang of Sun Yat-sen University, might have been able to undertake their research anyway

First, and probably most importantly, their experiment was in non-viable embryos: eggs that had been fertilised by two sperm and so would never develop into humans, genetically modified or otherwise.

The Guidelines on Human Assisted Reproductive Technologies forbid “the manipulation of the genes in… embryos for the purpose of reproduction.” But these experiments were certainly for research, not for reproduction, which was not even a possibility with such embryos.

Second, as Araki and Ishii’s study makes clear, there is an important distinction between legal bans and guidelines.

A report from the Medical Research Council in the UK notes that China’s regulations governing research ethics “consist mostly of guidelines promulgated by the relevant ministries, which could be considered to constitute ‘soft law’” and that “the sanctions for breaching ministry guidelines are often unclear.” Researchers violating the Guidelines on Human Assisted Reproductive Technologies in particular have lost their licenses, the report notes, which would make it illegal for them to continue their research. But such enforcement appears to be inconsistent, as it’s left largely up to local governments.

Internationally, most of these rules were drafted before the technology that made the recent Chinese experiment possible became widely available, and that technology is still too inaccurate and unpredictable to be used clinically on viable embryos that could become genetically modified people.

As for the rest of the world, there’s a patchwork of laws addressing the possibility of editing the genomes of human embryos. In Russia, the Japanese researchers note, “germline gene modification for reproduction is not considered” by the relevant legislation. In Canada and many European countries, the bans are quite strict; in Austria, for example, “any intervention involving the human germline is prohibited.”

Along with China, India, Ireland, and Japan also have guidelines that are not legally binding; those countries, as well as the US, “might permit it,” the researchers predict, once such techniques become safer.

On Wednesday, reports emerged that Chinese researchers had conducted germline editing—the modification of non-somatic sex cells and embryos—for the first time, attempting to remove a gene responsible for a common blood disorder.

The news was greeted with little fanfare from leading researchers in the field; they had already preemptively condemned the practice weeks before the researchers at Sun Yat-sen University in Guangzhou had published their results.

In the March issue of Science, a coterie of biologists called for a moratorium on germline editing until there was further public discussion on the potential medical, legal, and ethical consequences of the practice.

“Let’s make sure we are doing the appropriate research before employing it in ways that could be harmful,” Jennifer Doudna, chair of the Center for Biomedical and Health Sciences at UC Berkeley and a co-author of the Science article, said in an interview in April. “The recommendation is for a clinical pause.”

Doudna is a pioneer of the CRISPR-Cas9, the innovative genome editing method that was used by the researchers at Sun Yat-sen. CRISPR involves the use of an enzyme complex to cut into DNA and replace specific genes.

CRISPR was first described by Doudna and her co-author, Emmanuelle Charpentier, in Science in 2012. Despite the novelty of the technique, gene-editing itself is decades old; CRISPR mainly expanded access to gene-editing by making it much more affordable.

CRISPR has been described as a major advancement for biotechnology, and last November Doudna and Charpentier were handed the Breakthrough Prize by Cameron Diaz and Twitter CEO Dick Costolo, worth $3 million dollars each for both researchers.

Extensive clinical research in genetic modification already exists, but until now, it’s been corralled to the editing of somatic (non-sexual) human cells.

The Dangers of Embryo Editing

Germline editing raises a host of medical and ethical concerns distinct from existing genetic modification, with much of the latter concerned with therapeutic uses; one example given by the advocates for caution was modified T cells that could substitute for existing drugs for HIV/AIDs.

The infusion of modified somatic cells doesn’t risk passing on the modified genes to the next generation, whereas a hypothetical “designer baby” could pass on their edited genes to the next generation, which could carry unknown risks of its own, although this wasn’t a problem for the researchers at Sun Yat-sen, who had purposely used non-viable embryos.

“Scientists currently lack an adequate understanding of the safety and potential long term risks of germline genome modification,” the International Society for Stem Cell Research (ISSCR) said in March, in a statement that called for a moratorium on clinical human germline editing.

The ISSCR asserts that no consensus had yet been reached on the therapeutic potential of germline editing or how to distinguish between therapeutic uses of the method and “attempts at human enhancement,” which are generally considered taboo in the scientific community.

In Aldous Huxley’s novel Brave New World, society is rigidly split into five castes determined through embryonic modification. Much of the consternation surrounding the idea of “designer babies” is that germline editing could make Huxley’s dystopian vision of the future a reality.

“The fear is that germ-line engineering is a path toward a dystopia of superpeople and designer babies for those who can afford it,” Antonio Regalado wrote in Technology Review. “Why not design a highly intelligent group of people who could be tomorrow’s leaders and scientists?”

At the moment, the prospects of a world populated by designer babies remains the stuff of science fiction. The study of the genetics of intelligence itself remains in its infancy, with the artificial improvement of human intelligence looming near the edge of the impossible.

Human height, an infinitely less complex variable than IQ, was recently discovered to be correlated with 697 genetic variants. There is no single gene that explains much of variance for human height, apart from deleterious mutations like Marfan’s syndrome.

Similar research in the field of intelligence are still far behind. A 2013 report said that the biggest investigation of the genetic component of IQ only had DNA samples from 5,000 people, half of the 10,000 that first yielded results for genetic studies of height.

Much of the research is being spearheaded by the Beijing Genomics Institute (BGI), a partially state-funded Chinese company. In the Hong Kong facility, one project involved the sequencing of the genome of 2,200 individuals with IQs above 160.

“People have chosen to ignore the genetics of intelligence for a long time,”said Zhao Bowen, who oversees the BGI office in Hong Kong. “People believe it’s a controversial topic, especially in the West. That’s not the case in China.”