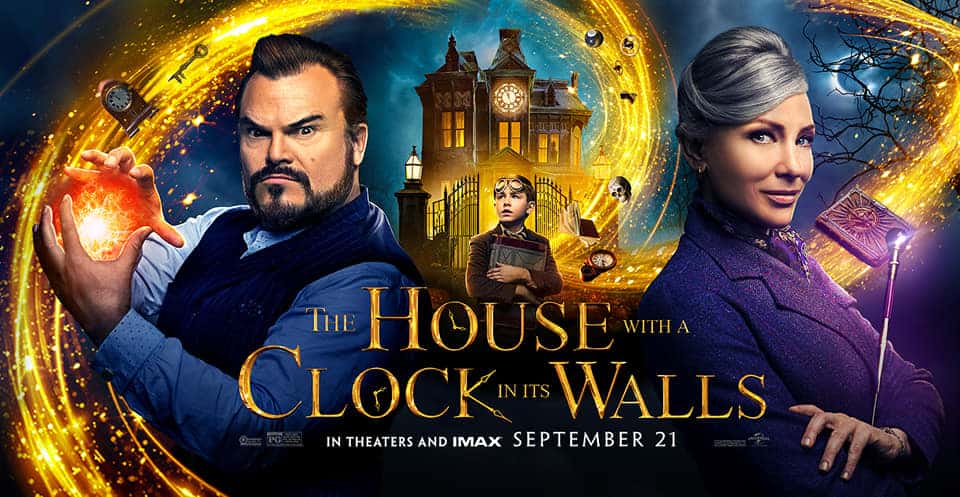 The House With A Clock In It’s Wall. This is esoteric mystery school initiation for kids at it’s finest. Jack Black not only is a warlock in real life, but he plays one on t.v. I’m just going to give you a few things from this movie. The entire movie could be broken down frame by frame but I have other papers I still need to finish. So I’ll give you spoiler highlights.

First off it’s Chronos or Saturn worship. The house is symbolic of your body (in this case) being a temple for the Holy Spirit. The house brings everything alive through Magic(k) and it’s heart is a giant clock i.e. Saturn. The clock itself is actually a doomsday clock so Saturn is portrayed as the keymaster of world events, not God the Creator of the Bible. A key is actually used to get the clock into motion. We have a weird esoteric version of the Angel with the key to the bottomless pit. This is Eli Roths version of order out of chaos.

The boy in the film is Lewis which means WOLF and he is the 12 year old initiate here. He wants to harness this “magic(k)” and he starts by trying to transmute lead into gold. An initiation into Alchemy by his uncle Jack who is wearing his 33rd degree Masonic red fez hat. His consort is always wearing purple signifying she has already walked up that staircase of enlightenment. In the end, she is the most powerful with this esoteric magick. So Lewis can’t turn lead into gold physically but he is told everything is within himself. It turns him to the spiritual side of things which is more dangerous than just dressing like Harry Potter.

He suddenly puts his finger in a flat circled water bowl that has constellations surrounding it. His finger touches in Taurus at Aldebaran or the red eye of the bull. The stars come out of the waters and manifest in holgram form. It is a rendition of the stars in the waters of the firmament. There is always truth thrown in with these demonic lies. You then see Saturn over the waters of “chaos” in the next shot.

“Ironically”, the town is called New Zebedee and the mascot is Zebus which is a bull. More bull worship. Zebedee means gift of god and he was the father of James and John who was a fisherman. This is the NEW Zebedee. There school motto is “never luuz”. Luz can mean almond tree or bone. The verb luz in Hebrew means “to turn aside” in the sense of turning from Gods wisdom or being a “twisted person”. I think this definition fits the bull town better in light of the movie. Oh yeah, in Spanish, luz means light. The esoteric false light is being promoted here.

Lewis is told from then on that he needs to read all of these esoteric books to obtain their magick.

He is shown putting his hand on a levitation spell. You’ll notice the one eye on the palm. He was specifically told not to touch one book. Does that sound familiar from the Tree of knowledge of good and evil. It was a book on necromancy, bringing people back from the dead. When Adam ate from the tree they spiritually died, not physically. Lewis the wolf read the book to bring people back from physical death who were already spiritually dead. This movie creates confusion for kids spiritually and physically.

He decides to resurrect a warlok Isaac Izzard (lizzard) who was given mysterious teachings from the demon Azazel. Yeah they seriously went there. He is buried in Oak Ridge cemetery that reads “the trumpet shall sons and the dead shall rise”. Lewis had the “trumpet” in the form of this spell and set up a pentagram with a circle around it. On the tomb three were goats head pentagrams with upside down crosses on it. Oak Ridge is a shout out to the god they made a covenant with. Ba’alberith if you remember, is the covenant the Jews made with a entity at a Oak tree in Shechem. This entity is interchangable with Belzebub, the lord of the flies.

The symbolism in this movie is completely demonic. I didn’t post all of it but I also suggest you don’t watch it (or kids get near it) to see it all. Initiation is all I can say. This makes Harry look like a pansy.