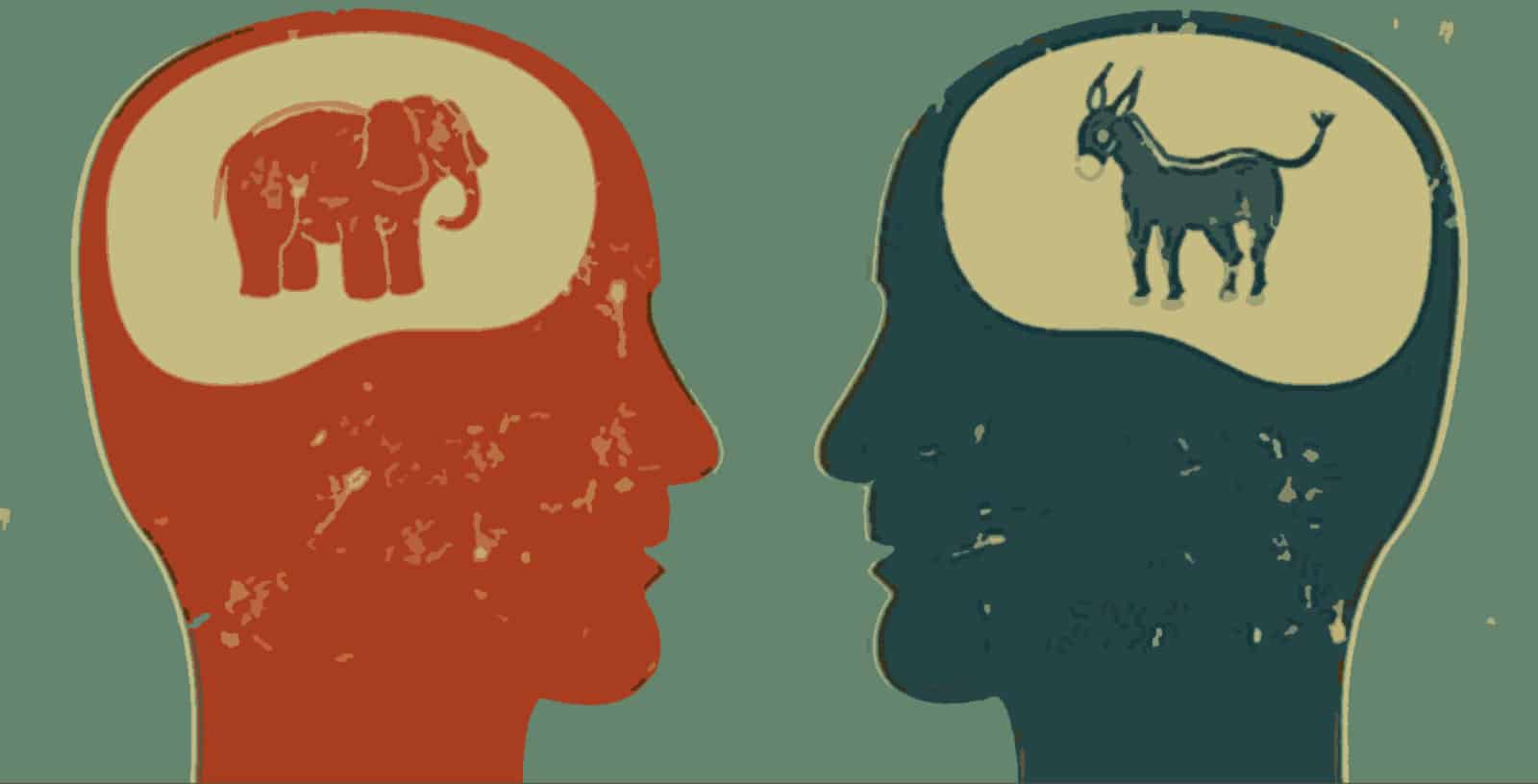 Ever since Trump won the Republican nomination–and even more so since he won the general election–it seems we are right back to the old Republican vs. Democrat, left vs. right, liberal vs. conservative mentality that got us into this mess in the first place. It is to the point that major “patriot” radio talk show hosts are sounding more and more like Republican hacks such as Rush Limbaugh and Sean Hannity. And so-called patriot websites seem to have lost their constitutional objectivity as well when it comes to Trump.

As a national radio talk show host and columnist, I went through this with G.W. Bush. And as Yogi Berra used to say, “It’s deja vu all over again.” So, where exactly does that leave honest, objective truth-tellers? We catch it from all directions.

Just a few days ago, an ultra left-wing propaganda website did a hatchet job on yours truly and the good folks at Liberty Fellowship. A reporter (or should I say saboteur) snuck into one of our services and wrote up a hit piece that Joseph Goebbels (and the SPLC) would be proud of. At the same time, so-called conservative, patriot websites and columnists are attacking me with equal ferocity. What should that tell you? It should tell you that neither side is interested in truth; both sides only want to report that which furthers their own political agenda.

Truth is dead; objectivity is dead; honest journalism is dead. Truly, “fake news” is found on both ends of the political spectrum.

The fact is, Donald Trump has made and is making many decisions that should deeply concern constitutionalists, conservatives, and patriots. For all intents and purposes, the “law and order” agenda he is publicly promoting eviscerates the Fourth Amendment along with several others.

For example, Trump recently threatened to ruin the career of a Texas State Senator who dared to introduce legislation that would require a criminal conviction before law enforcement authorities can seize a person’s assets. The way the laws are written right now, the government can seize any citizen’s personal assets without having to charge the person with any illegal activity or wrongdoing. Mere suspicion is all that is necessary. Do Trump’s supporters really support THAT? If they do, they have no right to call themselves a “constitutionalist,” that’s for sure.

With President Trump’s public rhetoric promoting police “stop and frisk” laws and similar bullying tactics, 157 people have been killed by police officers in just the first six weeks of 2017. That is almost a 10% increase over 2016’s banner year of police killings at this point on the calendar. And we are not yet two months into the new year. Does this make you feel “patriotic”? Do you really think this is what it means to “drain the swamp”?

Over Barack Obama’s eight years in office, he appointed twenty-one members of the globalist CFR to his administration. In just the beginning stages of Trump’s administration, he has already appointed four individual CFR members (Elaine Chao, Robert Lighthizer, K.T. McFarland, Robert Wood Johnson IV). Then count the companies that are CFR affiliates and the appointees from these companies that Trump has selected, including Rex Tillerson and Robert Harward, and that adds 15 additional CFR globalists to his administration. So, in reality, Trump has already appointed 19 CFR globalists to his administration–and he is only a few weeks into his presidency. At this rate, Trump is on a pace to far exceed Obama’s CFR appointments. Is that what you call putting “America first”?

Donald Trump’s CIA chief, Michael Pompeo, wants no interference or prohibition upon the federal government’s collecting “metadata” information on the American people. He wants to ignore or eliminate the USA Freedom Act that limits such data collection and resume the government’s collection of personal data on the American citizenry unimpeded. In other words, Pompeo wants the federal government to have complete freedom to spy on every American citizen, no exceptions and no limitations. Does that sound pro-constitution and pro-freedom to you?

Speaking of Pompeo and the CIA, Trump’s CIA chief just awarded Saudi Arabia Crown Prince Mohammed bin Nayef the George Tenet award for his work in “fighting terrorism.” I kid you not. Look it up for yourself.

Without a doubt, Saudi Arabia is the biggest exporter of terrorism in the entire Middle East. The Saudi government’s fingerprints are all over Al Qaeda, ISIS, and even the 9/11 attacks here in the United States. And Trump gives the Saudi deputy premier and interior minister an “anti-terrorism” award? Are you kidding me?

And talk about conflict of interest: here are the Zionists that Donald Trump has appointed to his administration so far: Jared Kushner, David Friedman, Jason Greenblatt, Steven Mnuchin, Stephen Miller, Carl Icahn, Gary Cohn, Boris Epshteyn, David Shulkin, Reed Cordish, and Avrahm Berkowitz. Try to find that many people of virtually any other single persuasion that Trump has appointed. But appointing this many Zionists to his cabinet is not supposed to concern us?

Plus, as we speak, the Trump administration is already making excuses as to why Obamacare won’t be able to be rescinded or replaced “any time soon.” And, of course, after saying that NAFTA needed to be shredded on the campaign trail, President Trump is now saying it needs to be reworked. But it’s uncertain at this point how or even if that will be accomplished. (Thankfully, Trump did put the whammy on TPP.) Oh, and the promise to put Hillary Clinton in jail: forget it. Trump has made it clear that the Clintons are “wonderful” people and that he has great “respect” for both of them.

And speaking of putting people in jail, you know that Donald Trump wants to put people who burn the American flag in jail for at least a year or take away their U.S. citizenship, right? What’s next? Will he propose shooting them?

Do I support burning the American flag? Absolutely not! I find it disgusting and revolting. Neither did I support those NFL players who refused to stand during our National Anthem during this past football season. I found those players to be equally repugnant. And the American viewing public had every right to register their displeasure of Kaepernick and Company by not watching NFL games–and a host of them did just that. But this is America. People have the right to protest, whether the rest of us find the protest disgusting or not. Freedom says, “I may not agree with what you say, but I’ll fight for your right to say it.” Apparently, Donald Trump doesn’t believe that. As a private citizen, that’s no big deal; but as President of the United States of America, that IS a very big deal.

By this time, people may have gotten an entirely wrong perception of what I’m saying. Believe it or not, I’m NOT anti-Trump. I actually concur with many things Trump has said and done so far (not the things mentioned above, of course). What I am is chagrined and saddened at the lack of principled objectivity being demonstrated by many so-called conservatives.
The left has been guilty of this for years. And now with the election of Donald Trump, the right is proving itself equally guilty. That makes the right no better than the left–which takes us back to the beginning of how our country got in this shape to begin with. As writers and columnists, why can’t we stand foursquare on the principles of liberty and constitution.

What seems clear is that whatever else Donald Trump has accomplished by this election–whether wittingly or unwittingly–he has definitely brought back the destructive and distracting left-right paradigm. But that’s not his fault–it’s ours.But that’s not the point. Our job as independent, honest, and objective columnists, writers, reporters, journalists, etc., is to remain loyal to the principles of truth, liberty, and constitutional government–no matter who is in the White House or what party controls Congress. Anything less is just more unprincipled partisan politics. In other words, more SWAMP.