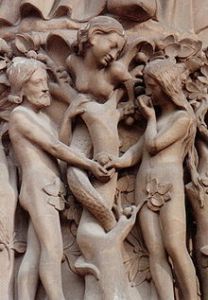 Often times we gaze upon a seed and have no idea what sort of plant it might become. A children’s poem expresses this idea: “Plant a seed and watch it grow. What it shall one day be, we do not know.” Ideas are like seeds as well. Often we do not see where they might lead. Like the seeds in the poem, sometimes the only way to judge an idea is to see what it grows into. A very small notion can grow into an ideology very quickly. Hitler’s idea of racial supremacy was a small seed that grew into a world war and well over 6 million dead bodies. Marx and Lenin’s atheistic ideas have led to over ten times that. Clearly, ideas are potent. In theology, a very small error can have a collateral effect on nearly every other doctrine. Huge heresies nearly always grow from very small seeds.

One such idea is the Serpent Seed doctrine. This is the teaching that in the Garden of Eden, the serpent had sexual relations with Eve. The result was that she bore Cain. The primary notion is that the original sin was sexual. This has some visceral appeal because the doctrine that fall of man resulted from a poor produce selection seems fanciful. Sexual temptation is something we all can relate to and agree is powerful. The problem is that it is directly opposed to the clear and explicit word of God. It is easily refuted by Genesis 4:1.

Now the man had relations with his wife Eve, and she conceived and gave birth to Cain, and she said, “I have gotten a manchild with the help of the Lord.” (Genesis 4:1)

Of course the old King James translation uses the euphemism based on the Hebrew that “Adam knew his wife…” which some disingenuous serpent seed devotees have attempted to obfuscate. These arguments are completely without merit as the Hebrew יָדַע rendered “to know” is obviously properly understood by its context to mean “had sexual relations” because the result is that “she conceived.” The context and grammar make this absolutely clear. In fact it is used in the same way two more times in the same chapter.

Cain had relations with (knew) his wife and she conceived, and gave birth to Enoch; and he built a city, and called the name of the city Enoch, after the name of his son. (Genesis 4:17)

Adam had relations with (knew) his wife again; and she gave birth to a son, and named him Seth, for, she said, “God has appointed me another offspring in place of Abel, for Cain killed him.” (Genesis 4:25)

Attempts to argue that this use of “knew” only implies knowledge are blatant special pleading. The context rules out any other meaning for the term. So how can anyone possibly pass this absurd idea off as biblical?

For scriptural justification, advocates of the view point to the curse God gave to the Serpent:

This verse contains a puzzling yet important ambiguity: Who is the “seed” of the woman and the “seed” of the serpent? It seems obvious that the purpose of this verse was not to answer that question but rather to raise it. What we see are the battle lines of a cosmic struggle being laid down. The epic of salvation history, the drama that later biblical writers saw behind the deed of, “That ancient serpent called the devil or Satan, who leads the whole world astray” (Rev 12:9:) to “dust will be the serpent’s food” (Isa 65:25) culminating with Christ’s ultimate triumph with “The God of peace will soon crush Satan under your feet.”(Rom. 16:20a)

Of course one could raise a valid complaint that snakes and humans cannot procreate. While I am of the opinion that the Hebrew term nacash is referring to something much more than a snake, there are debates on just what the seed of the serpent actually is. That aside, the biblical text does not allow it to be the line of Cain. Still yet, the idea has appeal for cult leaders and racists because they have justified an “us versus them” paradigm. The ‘us’ is inevitably the heretical cult that teaches the doctrine and the ‘them’ is virtually anyone they disagree with.

And that brings us full circle to ask, “What is the fruit of the Serpent Seed doctrine?” It is demonstrably demonic, the fruit of occultism and bigotry. After the Babylonian captivity, some Pharisaic Jews began viewing the account of Eve and the Serpent allegorically. They taught that Cain was actually Satan’s offspring. They also that taught Cain and his descendants had no opportunity to be restored to God. It also reared its ugly head in the ninth century Jewish Midrash called Pirke De-Rabbi Eliezer and various Targums (Jewish commentaries) which altered Genesis 4:1. These Targums have been appropriated to support the sensationalist claims by those who defend the Serpent Seed heresy. Of course these Targums are dated in the middle ages 1500-2000 years after Genesis was written and are easily discredited by the Dead Sea Scrolls texts  and the LXX which contains the traditional rendering of Genesis 4:1 and is dated centuries earlier (~200 BC). [1]

Notwithstanding, the Serpent Seed is a staple of the Kabbalists who teach that God created two “Adams” one with a soul and the other, the Nacash, without one. This is recorded in the Zohar:

Two beings [Adam and Nachash] had intercourse with Eve, and she conceived from both and bore two children. Each followed one of the male parents, and their spirits parted, one to this side and one to the other, and similarly their characters. On the side of Cain are all the haunts of the evil species; from the side of Abel comes a more merciful class, yet not wholly beneficial — good wine mixed with bad. (Zohar Bereshith, 36b)[3]

It also appeared in early Gnostic writings and was explicitly rejected by Irenaeus (c. 180) in Against Heresies “Others, again, portentously declare… this one (Eve) sinned by committing adultery.”[4] It persisted in Gnosticism in works such as the Gospel of Philip (c. 350). It was also foundational to the Manichaeans, one of the major Iranian Gnostic religions, and was again deemed heretical by St. Augustine in the 4th century.[5] The occult gnostic roots sprouted from this seed were resoundingly deemed heretical by the Fathers. What have these roots grown into? Racism.

Modern adherents to the Serpent Seed doctrine are largely occultists and white supremacists. Hitler was fascinated with the occult and embraced the racist teaching. The Christian Identity Movement teaches that white people are the descendants of Adam and are hence the only chosen people of God.[6] The Klu Klux Klan also believes the Serpent Seed doctrine. They and other hate groups believe it to be their duty to exterminate the lineage of Cain and Ham. Rotten fruit indeed.

Pentecostal Pastor William Branham also taught that the fall of mankind resulted from Eve having sexual intercourse with an upright Beast whom Adam had named ‘Serpent’.[7] In addition, Arnold Murray, the pastor of the Shepherd’s Chapel, is a current promoter of this unbiblical heresy.[8] While attempting to mitigate his stance with disclaimers, Jim Wilhelmsen teaches it explicitly as a racial theory stating,

That both Cain (White) and Abel (black) could represent races that were never in the intention of God’s structure, one being a direct seed of the serpent, and the other an “out of time seed of the woman.”[9]

He also advocates it in his statement of faith stating, “We believe in two literal seeds mentioned in Genesis 3”[10]Unfortunately, that seems to rule out the traditional spiritual interpretation.

Another recent popularizer is Joye Jeffries Pugh in her book Eden – The Knowledge of Good and Evil 666 which argues,

Through Cain, Satan had created a human from his own seed. Cain was the first offspring produced as a result of the Sons of God mating with a woman.[11]

She then proceeds to spin and elaborate yarn about Egyptian secret societies and fallen angels while providing scant documentation. Much like The DaVinci Code, it makes for entertaining mythology but offers little in the way of substance. Other modern day adherents include Sun Myung Moon, Way International, some Islamic sects, some Oneness Pentecostals, some Satanists and British Israelism. With strange fruit like this – it’s better to smash the seed before it grows.

Be of sober spirit, be on the alert. Your adversary, the devil, prowls around like a roaring lion, seeking someone to devour. (1 Peter 5:8)

Persecution and false ideas are the devil’s primary devices. In Ephesians 6, arguably the definitive text on spiritual warfare, you don’t find special rituals or prayers to recite for casting out demons. The tools of spiritual warfare are the helmet of salvation that you always have on, the sword of the spirit is the word of God which you can read, and the belt of truth which should always be around your waist. In other words, the more you are familiar with the truth the more impenetrable your spiritual armor. Praying at all times in the spirit, spiritual warfare is primarily on two fronts:

We are destroying speculations and every lofty thing raised up against the knowledge of God, and we are taking every thought captive to the obedience of Christ, (2 Corinthians 10:5)

The Serpent Seed doctrine is the seed of error.