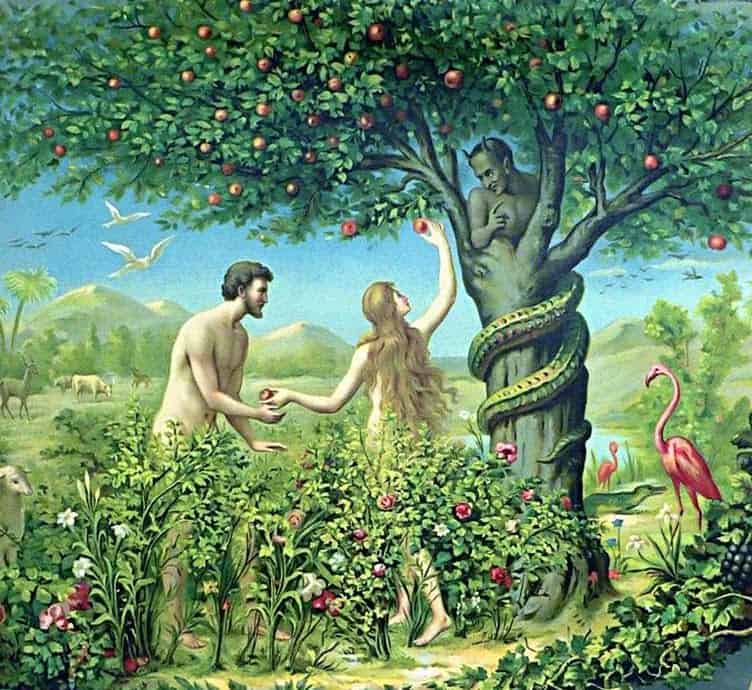 I’ve gotten more emails on this topic than I can shake a stick at, so I’ve decided to blog it and then just direct people to this post in the future. I don’t know who started this on the internet-probably one of those “I found secret knowledge about the Bible” people who start followings in cyberspace. At any rate, he wasn’t anyone who knew anything about the Bible, the Dead Sea scrolls, or the other material I’ll touch on.

Cain Fathered by Satan or a Demon?

Though there are by no various expressions of it online, the nonsense goes something like this.

What really happened in Eden (Genesis 3) was that Eve was seduced by the serpent (whose name was Sammael), they had sex, and produced Cain (Genesis 4). This is why Cain was “marked” by God later on-God hated him since the serpent was his father. The Bible covers all this up since its editors removed it. Thankfully, the Dead Sea Scrolls preserve it. That’s just one reason the scrolls were kept from the public for so long.

Here’s the truth about this particular web gem. I’ll unpack each point briefly.

1. Genesis 4:1 was NOT found among the textual remains of the Hebrew Bible among the Dead Sea Scrolls. It is important to realize that much of the biblical material from Qumran is partial and fragmentary. Only the book of Isaiah can be said to be virtually complete (99% of it was found at Qumran). There are portions and scraps of every other OT book except Esther. Genesis 4:1, the account of Can’s birth, is not in the Dead Sea Scroll material. The closest you get is Genesis 4:2-11, which is 4QGenb or 4Q2 (read, Qumran, Cave 4, Genesis “b” – that was the name given to the fragment – also called Qumran, Cave 4, no. 2 by other researchers). This fragment was published in volume 12 (pp. 36-37) of the Discoveries in the Judaean Desert (DJD) series (Oxford University Press – the official publisher of scrolls material). The fragment is IDENTICAL to the Masoretic text of the Hebrew Bible used today. Therefore, the Dead Sea scrolls don’t preserve this weird view of Cain’s lineage. Readers can check on what I’m saying through two relatively inexpensive sources:

2. Since we already know the name doesn’t occur in the biblical scrolls (the point above), I thought I’d look for it among the other scrolls material – sometimes the other material has commentaries on the biblical material. A computer search for “Sammael” (or the alternate spelling Samael) yields ZERO occurrences in the non-biblical texts from the Dead Sea Scrolls. This is more proof that this “account” is not only absent in the biblical Dead Sea Scrolls; it isn’t present in the scrolls that covered other subjects besides copying and commenting on the Hebrew Bible. You can watch a video of me doing this search so you know I’m not making it up. (Turn your speakers up and use high speed – it’s 29 MB).

3. I knew that I wouldn’t find the name Sammael or Samael in any of the scrolls. The name does occur among the Pseudepigrapha. The video I made above includes this search and its results. Sorry, no sex between the serpent / Sammael and Eve. Boring, I know. Outside the name Sammael/Samael, n some pseudepigraphic material (4 Maccabees 18:8) the serpent gets blamed for all sexual sin, but that’s a lot different than fathering Cain.

4. Some rabbinic material does have the devil fathering Cain. Targum Pseudo-Jonathan has this idea. Here’s a brief video of me looking this up an explaining the reading [You can check my translation by consulting the English translation of Targum Pseudo-Joanathan at this link. This translation, though, does NOT have the variant that includes Samael]. The other Targums do not have this reading. Targum Pseudo-Jonathan is dated by Aramaists at roughly the sixth century A.D., or between 1500-2000 years AFTER Genesis was written (the date range depends on when one thinks Genesis was written). The Talmud relates a story that Yonatan ben Uziel, a student of Hillel (roughly contemporary with Jesus), fashioned an Aramaic translation of the Prophets. That translation is considered by some to be Targum Pseudo-Jonathan. However, the story makes no mention of any translation by him of the Torah, and so it cannot be argued that Targum Pseudo-Jonathan of Genesis 4:1 is as old as Jesus’ day. The sixth century A.D. is all the evidence allows. Targums can be very elastic translations, adding material quite freely with no Hebrew manuscript evidence at all. Everyone who does Aramaic knows this about the Targums-they can play pretty fast and loose with the text of the Bible; they INSERT all kinds of things into the translation, without regard to any prior textual manuscript history for support. IN plain language, the Targums often add made up material to the biblical text. Having Samael in Genesis 4:1 is a classic example – it was added at least 1500 years after the fact, and no other prior ancient Jewish material supports it.

Laurence Gardner, that pseudo-ancient text researcher of Jesus bloodline nonsense fame, wants Eve and Yahweh to be the ones having sex-or, “more realistically” in his mind, to have the extraterrestrial god known as Yahweh (who is really Sumerian Enki) genetically implant his DNA in her. In an online lecture on this topic Gardner (largely parroting Zecharia Sitchin) says:

Conventional teaching generally cites Cain as being the first son of Adam and Eve – but he was not; even the book of Genesis tells us that he was not. In fact, it confirms how Eve told Adam that Cain’s father was the Lord, who was of course Enki the Archetype. Even outside the Bible, the writings of the Hebrew Talmud and Midrash make it quite plain that Cain was not the son of Adam . . . Around 6000 years ago, Adam and Eve . . . were purpose-bred for kingship by Enki and his sister-wife Ninkhursag. This took place at a ‘creation chamber’ which the Sumerian annals refer to as the House of Shimta (Shi-im-tA meaning ‘breath – wind – life‘ ). Adam and Eve were certainly not the first people on Earth, but they were the first of the alchemically devised kingly succession. Nin-khursag was called the Lady of the Embryo or the Lady of Life, and she was the surrogate mother for Adam and Eve, who were created from human ova fertilized by the Lord Enki. 1

In regard to how the book of Genesis tells us Cain was not the son of Adam and Eve, Gardner has this quotation in his book about the birth of Cain. Let me go on record as saying this is one of my favorite Gardner quotations, only because it’s a crystal clear example of how Gardner DELIBERATELY misleads his readers, likely because he hates Christianity so much:

Gardner’s quotation creates the distinct impression for his readers that Genesis 4:1 contains ONLY this line about Eve saying she “got a man from/with the Lord.” It’s an incomplete citation, though-and you’ll see right away why Gardner wouldn’t give you the rest of the verse in his book. Here’s the whole verse in Hebrew and English (I have given the English and the Hebrew matching colors so you can follow the translation):

It’s easy to see here how Gardner only gave his readers the second half of the verse – omitting the part that explicitly says that ADAM “knew” Eve (a common sexual euphemism in the Bible) and so fathered Cain. How convenient. How self-serving. How dishonest.