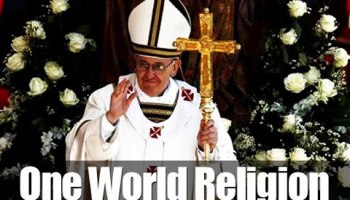 This is the closest you are going to get to a commercial for the one world religion they want to enact.

PS – here’s the original Pope vid: https://youtu.be/Nq7us5Lf5IU Funny they want to bring the world together to “have a discussion” but they’ve closed comments for the video.

*Note: In regard to the atomic bomb being the real start of the one world government, I said “catalyst”. The plan for the UN started well before WWI, but the League of Nations fell apart. It was the atomic bomb which solidified the “necessity” for the UN and it is well documented that the war would have ended anyway without the need to drop it on Japan (Read Quigley’s Tragedy and Hope for more on this). The bomb was planned out long before WWII and Rockefeller funded pretty much every single person involved in creating it, including the guy who rounded up all of the other refugee scientists that helped build it and who got Einstein to write the letter to FDR that started the Manhattan Project.