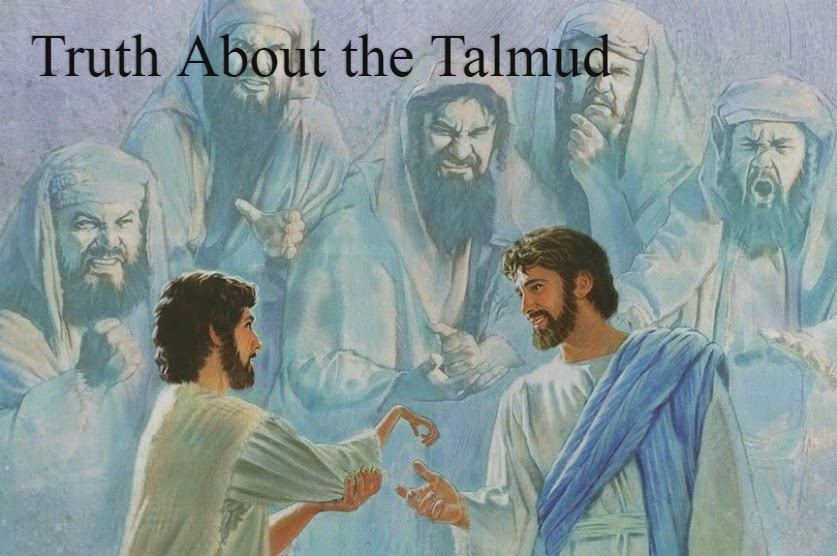 Christians who claim a “Judeo-Christian” (which is an oxymoron) worldview need to understand that Judaism’s Holiest Book is the Talmud, not the Old Testament, and that, far from being the inspired word of God, the Talmud is a collection of traditions of men inspired by the god of this world.

“But in vain they do worship me, teaching for doctrines the commandments of men.” (Mt 15:9)


“For laying aside the commandment of God, ye hold the tradition of men, as the washing of pots and cups: and many other such like things ye do.” (Mk 7:9)

“Beware lest any man spoil you through philosophy and vain deceit, after the tradition of men, after the rudiments of the world, and not after Christ.” (Col 2:8)

“…the Talmud is oftener brought in Vindication of their religion, than Moses, the Prophets, and Holy Writings: insomuch that they make it, and not the Old Bible, the touchstone of their doctrine, and that into which they resolve the decision of all their cases…the Talmud of Babylon … is universally received as the authentic body of their Law. ” – Lancelot Addison

“Although intercourse with a female gentile is very grave, it was permitted during wartime (under the conditions it stipulated) out of consideration for the soldiers’ difficulties. And since our concern is the success of the collective in the war, the Torah permits soldiers to satisfy the evil urge under the conditions it stipulated for the sake of the collective’s success.” (*this runs parallel to the Muslim “rape culture”)

Rosh Hashanah has no basis in the Word of God: The concept of the 7th month being “Rosh Hashanah” is a doctrine borrowed by the rabbis of Judaism from the pagan Babylonians. The four new years in the Talmud Bavli are adopted from the Babylonian custom of having numerous new years, which is symbolic of the numerous gods of polytheism. Rosh Hashanah is a hoax; a man-made tradition masquerading as being of Old Testament origin. Rosh Hashanah as the start of a “Biblical New Year” is a bogus rabbinic tradition falsely ascribed to the Word of God, by liars. 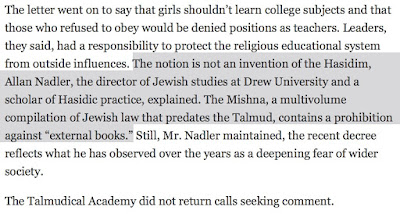 Click here: Anti-goyimitic bigotry is the issue suppressed by the press and the professors

The sacred texts Sifra, Mishnah, Gemara and Midrash are deceptive foils for rabbinic Judaism’s mission of seeking to pair extra-scriptural traditions with passages from the Bible; giving neutral words a Talmudic meaning, and fabricating derashot (doctrine presented in the form of homilies) that have no logical connection to Biblical verses, thereby throwing fidelity to the integrity of the Old Testament to the wind.

True Christians acknowledge the integrity of pshat (the literal meaning of the Biblical text). By insisting that Biblical interpretations be in strict harmony with the text, Christians differ radically and markedly from rabbinic Judaism.

2.  Our critics assert that the sacred rabbinic texts do not constitute law (Halakhah) but only commentary and debate.

The truth is very different: Halakhah is made up of the traditions found in the rabbinic texts.

Those texts as a whole comprise the Oral Law, what Josephus termed, paradôsis  (“tradition”).

Rabbinic law is grounded in the traditions of men, just as Jesus said (cf. Mark 7; Matthew 15). Those traditions consist of extra-Biblical superstitions and occultism, self-worship, racist hatred for non-Jews and sheer nonsense.

He reveals Judaism’s sympathy for Islam and its undying hatred for Christianity. 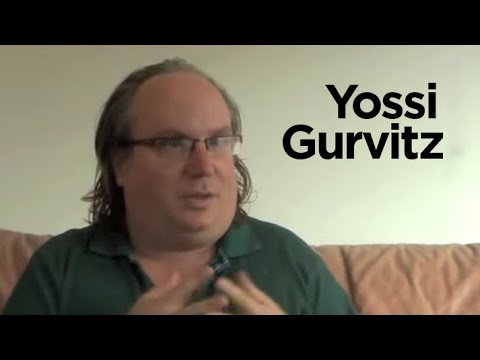 Testimony of Yossi Gurvitz, July 15, 2012
_______________
Rabbinic laws intended for access by Judaic persons only, teach that goyim (gentiles) are malevolent. For this reason, the goyim are grouped together with those categories of criminals and transgressors who cannot act as a witness in a court (Shulhan Arukh: Hoshen Mishpat 34).

Israel Meir Kagan (1838–1933), the halachic authority known as the Chofetz Chaim (a.ka. the Hafetz Hayyim), condemned the behavior of any Judaic physician who did not discriminate between Jews and non-Jews.

Concerning Judaic physicians, Rabbi Kagan wrote, “…to treat a non – J e w…there is no authority for them to do so” (Mishneh Berurah: O.H. 330). [The authority of Rabbi Kagan’s Mishnah Berurah, was assessed by Simcha Fishbane in The Encyclopedia of Judaism, which states, “His greatest work, which remains the strongest influence on Orthodox practice today and whose authority is considered final, is Mishnah Berurah (1884-1907), in six volumes”].

As Yossi Gurvitz reveals in the preceding videotaped testimony, exceptions to these bigoted rabbinic laws are permitted where Judaics are in subjection to the goyim and where news of Judaism’s discrimination toward, and second class status of, the goyim, would cause an uprising of “potential animosity” (mishum eivah) toward Judaics.

Therefore, to avoid a rebellion by the goyim, devious exceptions to the rabbinic law are made in public for the sake of pacifying (mipnei darkhei shalom) gullible goyim.  It is to these cosmetic exceptions, formulated for dissemination to inquisitive goyim who inquire about the nature of Judaism, that reference is made when Judaism attempts to defend itself from documented charges by objective scholars, regarding racism and bigotry toward non-Judaics in the religion of Judaism’s recondite rabbinic texts.

Where Judaic supremacy reigns supreme however (“Where ‘ Israel’ is mighty”), such as in the Israeli state, no such diplomatic niceties need be observed, and the full force of Talmudic/rabbinic halacha, with its institutionalized  contempt for, and discrimination toward non-Judaics, can be fully exerted.

“…there are no J e w s to be met with who adhere to the Old Bible without Talmud-Traditions …the word Talmud (which makes so great a Noise in the World) it may suffice to observe, that by a sort of Metonymy, it signifies the Book containing the main Doctrines of the J e w s…For it is very observable, that the Talmud is oftener brought in Vindication of their religion, than Moses, the Prophets, and Holy Writings: insomuch that they make it, and not the Old Bible, the touchstone of their doctrine, and that into which they resolve the decision of all their cases…the Talmud of Babylon…this later hath obtain’d public honor and belief among them: and at this day is universally received as the authentic body of their Law.

“The first among Christians who took more solemn cognizance of the Talmud, was Justinian the Emperor, who about the 551 year of Christ, gave Toleration to the J e w s to read the Sacred Bible in their synagogues in the Greek Tongue; but utterly prohibited them the reading of the Mishnah, as being neither adjoyned to the Sacred Books, nor delivered from above to the Prophets; but a mere invention of earthly men, who had nothing of Heaven in them. …the Mishnah Torah was composed out of the kabbalistics and anagogics of the J e w s…allegorical interpretations, pretended to be derived from Moses.

When the J e w s were settled in Italy and France, the bishops of Rome began to take severe cognizance of the Talmud. For Pope Innocent IV. commanded all the copies thereof that could be found in France to be burned, because it contained manifest blasphemies against God, Christ, and the Virgin Mary, inextricable abuses, erroneous and unheard-of fooleries.’ 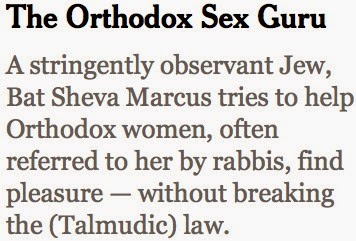 Slaughter Palestinians and it’s minimized.
Attack Israelis and it’s magnified.
This is the Talmudic mentality: 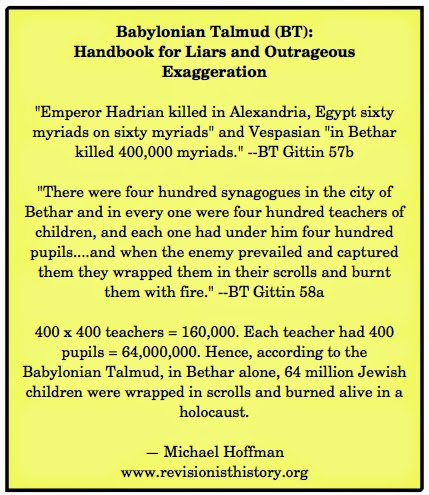 Jesus is sometimes shown in modern illustrations  with his head covered like a Pharisee. Where is the Biblical warrant for men to cover their heads? There is none. But it is found in the Babylonian Talmud, Kiddushin 31a: “Rabbi Huna the son of Rabbi Yehoshua ‘would not walk four cubits with an uncovered head.”

“J e w s don’t read the Bible literally. We read it through the lens of generations of interpretations and acknowledge the evolution of human understanding of God. The Talmudic image of God is vastly different from the image of God presented in the Bible.”