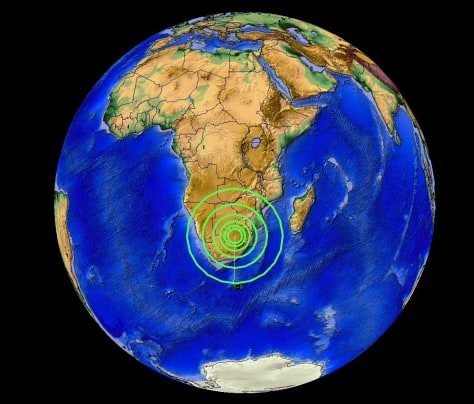 A large earthquake in South Africa?  Something we don’t normally hear much.

August 5, 2014 – a 5.3 magnitude earthquake struck the Southern portion of the African continent, in South Africa.

As one should ALWAYS do, I decided to look up the earthquake epicenter.

A mine resides at the earthquake location.

Located in the Klerksdorp goldfields of the Witwatersrand basin, some 160 kilometres south-west of Johannesburg, Buffelsfontein exploits the Vaal Reef conglomerate for its gold production.

The mining method is conventional breast mining with scraper winch cleaning. Mining units consists of pillar and remnant mining, while in the “newer” blocks scattered breast mining is practiced.

Mining takes place on the Vaal Reef at a dip close to horizontal. Access to mining blocks is created through conventional development and opening up of old areas.

The ore is loaded via ore passes into hoppers and hauled by locomotive to the shaft in haulages to be hoisted to surface, a mining method that has been in use for more than 20 years.

The operation is a combination of the workings of the Buffelsfontein Gold Mine and Hartebeestfontein Gold Mine which were established in 1954 and 1955, respectively. The deepest workings at Buffels are 3km below surface.

Buffels mine has undergone a considerable turnaround since Village management acquired the asset from Simmer and Jack in June 2011.

Following a restructuring process and changes to the management team, a rationalised plan was developed with key emphasis on: gaining intimate understanding of the orebody, reduce costs, improving productivity and creating mining flexibility through ramping up of development and opening-up rates.

This was done with involvement of key stakeholders such as organised labour which has also helped in improving relationships.

Buffels has stabilised and has delivered consistent performance over the last two quarters to December 2011.

Life of mine is projected until 2028. The total measured and indicated gold resource are 11.8Moz and uranium resources are 15.Mlb of uranium (including proven and probable reserves of gold of 1.5Moz and uranium of 1.78Mlb in reserves).

This is spread over 12,860.80 hectares with significant growth opportunities that could further extend the life of mine, especially in the current gold price environment.

The bulk of the plant’s production comes from the two underground sources (Tau Lekoa and Buffels), with low grade waste rock material being used as grinding medium which has resulted in significant costs savings compared to the previous usage of steel balls.

Uranium occurs in conjunction with the gold in the conglomerate reef, but is not currently being extracted.

The plant is a carbon-in-pulp (CIP) plant with plant capacity of around 180,000 tonnes of ore a month. The operation’s two uranium plants have long since been decommissioned and demolished.

Life of mine is projected until 2028, but the total measured and indicated resource of 11.9Moz of gold and 15.176Mlb of uranium (including proven and probable gold of 1.9Moz and uranium of 2.157Mlb in reserves) is spread over 12,860.80 hectares with significant growth opportunities that could extend the life of mine for many years beyond that, especially in the current gold price environment.

The Great Noligwa, Kopanang, Moab Khotsong and Tau Lekoa mines are situated near the towns of Klerksdorp and Orkney on the border of North West Province and the Free State. The AngloGold Ashanti Vaal River operations have among them four gold plants, one uranium plant and one sulphuric acid plant. Combined, the Vaal River operations (including surface operations) produced 34,785 kilograms (1,119,000 ounces) of gold, equivalent to 22% of group production.

Great Noligwa adjoins Kopanang and Moab Khotsong and is located close to the town of Orkney on the Free State side of the Vaal River. The Vaal Reef, the primary reef, and the Crystalkop Reef, a secondary reef, are mined here. This mining operation consists of a twin-shaft system and operates over eight main levels at an average depth of 2,400 metres. As from the end of June 2008, the SV4 section was transferred from Great Noligwa to Moab Khotsong.

Owing to the geological complexity of the orebody, a scattered mining method is employed. Great Noligwa has its own dedicated milling and treatment plant which applies conventional crushing, screening semi-autogenous grinding and carbon-in-leach processes to treat the ore and extract the gold.

Production declined by 32% to 10,268 kilograms (330,000 ounces) in 2008. Tonnes mined decreased by 34%. The fall in production was largely attributable to the transfer of the high-grade SV4 section to Moab Khotsong from where it can be more easily accessed. Power savings initiatives during the first quarter of the year and safety stoppages further contributed to the decline in production.

The overall unit cash cost for the year rose by 31% to R119,140/kg ($458/oz). This increase in costs was the result of lower production volumes and inflationary pressures on the major input costs of power, labour, support and stores. This was offset by an increase in uranium by-product credits as a result of improved production and the cancellation of loss-making uranium contracts.

As the operation ages, Great Noligwa is in the process of converting from conventional scattered mining to pillar or remnant mining for the remainder of its operational life. Up until now the Vaal Reef has been the most economically viable reef to mine, but as this reef is being mined out, the less economical Crystalkop Reef is being exploited increasingly as are the economically viable support pillars containing the Vaal Reef within the mine’s boundaries.

Contribution to attributable
group production in 2008 (%)