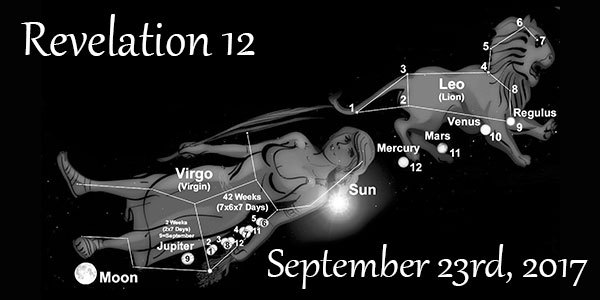 Let’s take a look at the evidence.

Recently at Answers in Genesis, we have begun to get inquiries about a supposed event of great prophetic significance on September 23 of this year. Many videos on the Internet are promoting this. On this date, the sun will be in the constellation Virgo (the virgin), along with the moon near Virgo’s feet. Additionally, Jupiter will be in Virgo, while the planets Venus, Mars, and Mercury will be above and to the right of Virgo in the constellation Leo. Some people claim that this is a very rare event (allegedly only once in 7,000 years) and that it supposedly is a fulfillment of a sign in Revelation 12. Revelation 12:1–2 (ESV) reads:

And a great sign appeared in heaven: a woman clothed with the sun, with the moon under her feet, and on her head a crown of twelve stars. She was pregnant and was crying out in birth pains and the agony of giving birth.

So we have here a woman (Virgo) in the sky (heaven), along with the sun, and the moon at her feet. What about the 12 stars? Virtually all the websites promoting this prophetic sign state that there are nine stars in Leo, but with the addition of the three planets (which appear as bright stars), there are 12 stars. Since Leo is to the upper right of Virgo’s head, one might see this as a crown of 12 stars, though these 12 stars will be far above Virgo’s head. Many of the videos that discuss this have various embellishments, such as tying this event to the supposed rogue planet Nibiru or the tetrad of total lunar eclipses in 2014–2015. I’ve previously written about these other two subjects and found them wanting, so we ought to be wary about this one too. Let us examine the claims. 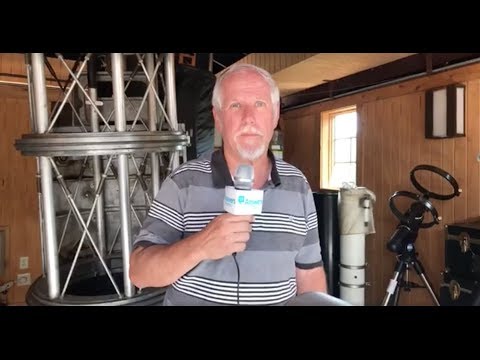 Dr. Danny Faulkner answers the question, “What will happen on September 23, 2017?” from the Johnson Observatory at the Creation Museum.

Examination of the Claims

First, there is nothing particularly unusual about the sun appearing in the constellation Virgo. As we orbit the sun each year, the sun appears to move through the 12 constellations of the zodiac, spending about a month in each one. The month that the sun appears in Virgo is around the time of the autumnal equinox, from mid-September through late October. Nor is it unusual to find the moon near the feet of Virgo. The moon takes 27 1/3 days to orbit the earth with respect to the stars. Therefore, for a day or two each month, the moon appears near the feet of Virgo. (I keep mentioning the feet of Virgo. Although I am very familiar with Virgo, I have never been able to see a woman in the sky there, so I can hardly pick out what is supposed to be her feet, and I seriously doubt anyone else can either.) Therefore, for a day or two each September or October, the sun appears in Virgo with the moon at her feet, so this is not that remarkable.

THIS YEAR’S EVENT HAS ATTRACTED MUCH MORE ATTENTION THAN PREVIOUSLY, SO WHY IS THIS YEAR SO DIFFERENT?

It was more than 15 years ago that I first heard the suggestion that this annual event might be a fulfillment of Revelation 12 in some particular year. Since then, interest in this idea has increased, with some people speculating or even predicting that “this is the year,” only to forget about it when nothing significant transpired before moving on to the next year’s occurrence. However, this year’s event has attracted much more attention than previously, so why is this year so different? One possibility is the addition of Jupiter to the mix. Some people claim that this year Jupiter will be near what is supposed to be the womb of Virgo, so it represents the child that the woman is about to give birth to. Jupiter takes nearly 12 years to orbit the sun, so this is the period with which Jupiter moves through the zodiacal constellations, spending about a year in each one. In fact, I first saw Jupiter when it was close to Virgo in 1969—I have watched Jupiter pass through four complete orbits since. This means that Jupiter appears in the part of Virgo corresponding to her womb, along with the sun in Virgo and the moon at her feet for a day or two every 12 years or so. The last time this happened was in 2005, so why was that event not heralded for its prophetic significance? I suspect that it is because YouTube was very new then, having started in February of that year. This year, with the huge popularity of YouTube, it is much easier to propagate these ideas.

Another factor is the addition of the three naked-eye planets in Leo, above the head of Virgo. The videos promoting this supposed sign claim that the constellation Leo has nine stars, so the addition of these three “wandering stars” brings the total number of stars in Leo, above the head of Virgo, to 12, with the 12 stars forming the crown of the woman in the sky, according to Revelation 12:1. Except that Leo has more than nine stars. Where did the people touting this supposed fulfillment of prophecy get the idea that Leo has nine stars? Every presentation of the September 23 event that I have seen has used the popular Stellarium software package to illustrate the events of September 23. Sure enough, the lines connecting the stars of Leo into an outline of a lion include nine stars. However, even the Stellarium display shows other stars in Leo that are not connected by the lines. And different depictions of Leo connect different numbers of stars. For instance, the monthly star chart in the April 2017 issue of Sky and Telescope magazine (pp. 42–43) connects 13 stars with lines. The star chart at this website connects 10 stars. None of these charts connect a line to Omicron Leonis, the star that forms the front paws of Leo. When showing Leo to people, I always point out this star marking Leo’s paw. By the way, the Digistar-5 software in the Stargazers Planetarium at the Creation Museum connects 10 stars in Leo, including Omicron Leonis.

Since the claim that Leo has nine stars is false, the assertion that the addition of the three planets brings the total number of stars in Leo to 12 is false too. And how rare is this occurrence, to have these additional three planets in Leo at the same time that Jupiter is in Virgo? It isn’t that common, but it certainly has happened many times over the past 6,000 years, so the claim that this unusual event is so rare is false too. And how do we know that Jupiter must represent the child? There is no evidence for that either. Instead, this is a mere assertion that someone made, with many others repeating the claim. Based upon Revelation 12:5, most commentators think that the child was Jesus. Some promoters of this supposed sign claim that the Hebrews associated Jupiter with the Messiah. Again, this is a conjectural assertion not supported by any facts. These sorts of claims amount to Rorschach tests—people tend to see in them what they want to see.

So, what will happen on September 23, 2017? Probably nothing unusual.

I have identified several problems with the supposed sign of September 23, 2017. However, there are other, broader problems with it. One of the purposes that God ordained for the stars is for them to be signs (Genesis 1:14). However, to truly be a sign, shouldn’t such things be obvious, at least to a few people? Since the sun will be in Virgo at the time, virtually none of Virgo’s stars will be visible. The three planets in Leo will be visible in the early morning that day, but all will be low in the southeastern sky. Venus is very bright, so it will be relatively easy to spot; however, Mars and Mercury will not be, because they will be much fainter, and they won’t rise until about the time morning twilight begins. The thin crescent moon will be visible in the evening sky, low in the southwest. Jupiter may be visible lower in the southwest, though it will be difficult, since it will set before evening twilight ends. That is, not all of this “sign” will be visible, and those parts that will be visible won’t be visible at the same time. While this event may show up nicely on a computer screen, God set the lights in the “firmament of heaven” (not on computer screens) to be for signs.

INSTEAD OF SETTING DATES, WE OUGHT TO BE READY FOR HIS RETURN AT ANY MOMENT. ARE YOU READY?

What sort of prophetic event is this sign supposed to usher in? Clearly, most people promoting this have in mind the Lord’s return. Some explicitly state this, but others, mindful of the words of Jesus in Matthew 24:36, are hesitant to make that claim, though their implication is clear enough. These sorts of claims or intimations have been made many times before. For instance, the four lunar eclipses during 2014–2015 caused many people to anticipate the Lord’s return then, but of course this did not happen. I suspect that the same will be true on September 23 this year. People who get excited about supposed signs miss the point that Jesus made (Matthew 24:36–51). Instead of setting dates, we ought to be ready for His return at any moment. Are you ready?