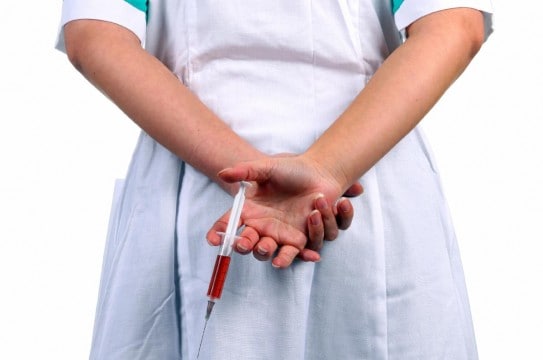 Robert Kennedy Jr and Robert DeNiro’s recent public call for “open and honest” discussion about vaccine safety has brought some long overdue scrutiny to the industry. Still, it’s confusing to sort through all the information. Are any vaccines safe? If so, which ones? Are any vaccines beneficial? What about those awful childhood diseases like whooping cough, what about smallpox and tuberculosis? Should you get your puppy a rabies shot? As this shocking list of common vaccine excipients (I had to look that up) shows, some research is clearly warranted before subjecting your family or your pets to any recommended vaccinations.

Excipient: “a usually inert substance (as gum arabic or starch) that forms a vehicle (as for a drug)” – Merriam Webster

Vaccination is a medical treatment administered to an otherwise healthy individual. Virtually all other invasive medical interventions occur only once someone has fallen ill. Vaccination, like most medical treatments, can involve some risk. And therefore it should be undertaken only after careful consideration of its risks versus its benefits.

The dangers of vaccines are real, can be substantial and life-long, and for some, life ending. Additionally vaccines:

Some of the viruses contaminating vaccines have a known effect, as in the case of the simian virus SV-40 that causes cancer (see Cross-Species Contamination below). Other effects are unknown. In 1975 Gena Bari Kolata wrote an article[i] in the journal Science in which scientists at the FDA admit that all live virus vaccines are “grossly contaminated with phages,” even though it was against FDA regulations at that time. Rather than recall the vaccines, the FDA changed the rules so that a recall wouldn’t cause undue concern for parents. In 1987 the FDA decided this about vaccines: “seed virus used in manufacture shall be demonstrated to be free of extraneous microbial agents except for unavoidable bacteriophage.”[ii] Bovine (cow) serum is a frequently used vaccine growth medium and the most frequently contaminated animal serums with bacteriophage.

Vaccines have many other agents as well as the viruses and contaminants that can cause significant injury (see the full list below) to a child or adult. These injuries include brain swelling and permanent brain injury, seizures and convulsions, blood disorders, and even death. Since 1988 over 3.4 billion dollars in compensation has been paid by the federal government to vaccine victims. And yes, they have paid for autism. Studies have definitively shown that vaccines can result in autism, a disease that has increased from 1 in 10,000 in 1990, to 1 in 150 in 2000, to the current rate of 1 in 68 children. According to the CDC, the most recent numbers breakdown to 1 in 42 boys and 1 in 189 girls diagnosed with autism.

While other environmental assaults are also associated with autism, the increased vaccination schedule can be the trigger or a significant contributing factor especially in children who are predisposed because of other conditions. These other conditions are often unknown and not symptomatic until the vaccine injury triggers a cascade of problems.

According to the US Food and Drug Administration, safety assessments for vaccines have not often included toxicity studies because vaccines have not been viewed as inherently toxic. Yet vaccines are legally defined as unavoidably unsafe.

It is not just childhood vaccines that come with substantial risk. Influenza vaccines, vaccines for sexually transmitted diseases, and others contain similar risks for adverse events. Also troubling is that vaccination is recommended now for pregnant women, even though vaccine package inserts clearly state they have not been tested on pregnant women, so the effects on the fetus can’t be known.

In the 1960s only a handful of childhood vaccines were given. The current CDC recommended vaccine schedule for children now has over 30 vaccines by the time a child turns 6 and an additional potential for up to 30 more by the time they reach 18. Could this increase be linked to our declining health? For example, currently:

Since genetic mutations change slowly over generations, we must look to environmental causes for these changes. While other environmental toxins certainly are at play in these statistics, disregarding the potential role to the amounts of toxin injected into children through vaccines is not only bad public policy, it is bad science. By disregarding the role of vaccines in our statistics for infant mortality and chronic diseases, we could be doing more harm than good in mandating, or even advising, them.

The list of adverse side effects for vaccines is long and troubling. A quick scan of the Vaccine Injury Table kept by the Health Resource Center for the U.S. Department of Health and Human Services reveals that compensation for injury is possible from a variety of the most common vaccines given to children.

Adverse events are the reason the Vaccine Injury Compensation Program has paid out over 3 billion dollars from 1988 – 2016 despite the fact that only 1 in 5 claims receives any compensation at all. Studies reveal that a small fraction of those injured by vaccines ever file any claim at all since most doctors reject the notion that a problem was caused by a vaccine despite the reality that such problems are listed on the manufacturers product insert. You can learn more by reading this fficial document: National Vaccine Injury Compensation Program.

Various vaccines are linked to the following serious adverse reactions:

People have varied genetic makeup and individual responses so there isn’t a way to tell if a given vaccine will provide the benefit of immunity, cause the illness it’s meant to prevent, or cause mild and/or serious neurologic illness or other “adverse events” (including death) following vaccination in some individuals.

Vaccines are known to be problematic for a segment of the population with a specific mitochondrial genetic mutation which may affect up to 4,000 babies a year. Some of those with a particular form of this dysfunction are unable to detoxify the poisons such as aluminum or mercury that are in the vaccine. This inability to detoxify the metals causes damage to multiple organ systems with sometimes devastating results.

In his 2004 testimony to Congress, Dr. Rashid Buttar [iv] (former vice chair of the American Board of Clinical Metal Toxicology and scientist at North Carolina State University) said that children with autism suffer from acute mercury toxicity which results in many imbalances, including systemic candidiastis, immune-suppression, immune dysfunctions, and gastrointestinal dysbiosis. He calls these conditions fires which resulted from one spark: mercury, including (and exacerbated by) the mercury in trace amounts still in childhood vaccines.

The problems associated with vaccines should lead manufacturers to conduct stringent testing. However, quite the opposite is true. In vaccine testing there is:

Safety or toxicity of vaccines is studied for short term rather than long-term. Many studies are limited to just a few weeks. When a vaccine is tested, it is given to healthy people and they are only given that one injection (not multiple injections at once, like a baby). The current CDC recommended schedule with a number of vaccines injected on a given day has never been tested. In essence, the current schedule is an experiment.

Vaccines Introduced 1985-1991 Were Not Studied For Autism

The Hib vaccine was introduced in 1985, and replaced by the Hib conjugate vaccine in 1988, to avoid a death rate of 1 per 106,000 persons.  The Hepatitis B vaccine was introduced for newborns in 1991 to avoid the risk of transmission from the mother which can occur in 1 in 480 births.  HepB is a blood-borne illness not transmitted by casual contact, so an infant is not at risk unless the mother is HepB-positive. Learn more by reading the report created by Foundation for Pediatric Health.

One traditional rule in medicine is that things are unsafe until proven otherwise. Despite this, and the understanding that aluminum is a neurotoxin, scientists still don’t understand exactly what aluminum does in the vaccine.

According to a 2007 article entitled “Neurological Adverse Events of Immunization: Experience With an Aluminum Adjuvanted Meningococcal B Outer Membrane Vesicle Vaccine” on MedScape, “aluminum salts (aluminum hydroxide, aluminum phosphate and alum) have been the main adjuvants used in vaccines for almost 80 years and are the only adjuvants currently licensed for use in humans in the USA. Despite the long experience, the mechanism of action still appears unclear. For many years, the main effect of alum was believed to be keeping the active antigen at the injection site and, therefore, available for initial interaction with the immune system. However, experimental studies have shown that the antigen disappears from the injection site within a few hours. The most important mechanism of alum is probably mediated through activation of antigen-presenting cells. Aluminum adjuvants also strongly influence the type of immune response and are important for stimulation of antibody production but probably do not induce cell-mediated immunity.”

Two things stand out: researchers are not sure what aluminum adjuvants do exactly but they guess that whatever action is relevant does not include cell-mediated immunity. Cell-mediated immunity creates actual immunity; antibody production alone does not. Continue reading…