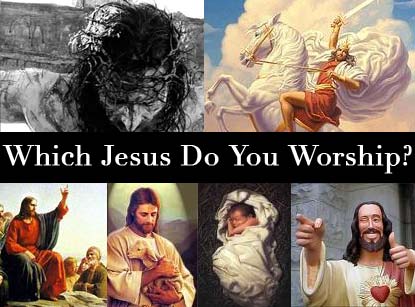 That may seem like an odd question to ask. After all, everyone knows Jesus. At least that is what they tell me when we’re out on the streets.

Everyone knows Jesus. Everyone! Even the strippers who showed up with boobs-a-blazing outside of a church in Warsaw, Ohio, claim to “know” Jesus. This was the second week in a row that the tattooed titties were on full public display for all of America to see.

Some call it indecent exposure (and trust me, these are not top-shelf beauties), while others call it “free-expression.” Call it what you will, but Jesus would not support bare-breasted women parading on the streets; especially in front of a church.

But the strippers claim that they “believe” in Jesus. They claim they pray to Him. They claim He loves them. They say they have “accepted” Him. They say He is not “judgmental” like so many of His followers. They say God is Love.

It might catch you off guard to learn that there are, in fact, two Jesus’ roaming about as the Son of God in America. That’s right…two of them. The question is, “Which one do you serve?”

I hate to be judgmental, but I believe that the majority of those claiming to be Christians are serving the Historical Jesus, while very few are choosing to serve the Biblical Jesus.

Over 2000 years ago God sent His Son into the world through the womb of a virgin. He was born in a manger in Bethlehem, grew to be a man, and started His earthly ministry at about the age of 30. He was crucified on a cross, dying for our sins, was buried in a grave, rose on the third day, forgiving us of all of our sins, and now sits at the right hand of His Father in heaven. He will one day come again to take His followers home.

I may have left out a thing or two, but for the most part that is the extent of what people know about Him…except that He is love…and He doesn’t want us to judge…and He forgives everyone. That is the Historical Jesus, and that is the Jesus most people claim to know and serve.

Most people would claim to know the historical George Washington. He is the father of our country. He led the troops at Valley Forge. He became the First President of the United States, and he chopped down a cherry tree.

The Biblical Jesus is a far different person. Very few people actually know Him, and even fewer follow Him. How do I know this? Simple. Jesus warned us…

• “…wide is the gate, and broad is the way, that leadeth to destruction…but narrow is the way, which leadeth unto life, and FEW there be that find it.” Matt. 7:13-14
• “Not everyone that saith unto me, Lord, Lord, shall enter into the kingdom of heaven; but he that doeth the will of my Father which is in heaven. Many will say to me in that day, Lord, Lord, have we not prophesied in thy name? and in thy name have cast out devils? and in thy name done many wonderful works? And then will I profess unto them, I NEVER KNEW YOU: depart from me, ye that work iniquity!” Matt. 7:21-23
• “Verily I say unto you, Except ye be converted, and become as little children, ye shall not enter into the kingdom of heaven.” Matt. 18:3
• “If ye love me, keep my commandments.” John 14:15

I could go on, but you get the point.

The Historical Jesus, just like the historical George Washington, is dead. The Biblical Jesus is alive: immortal, eternal, and everlasting. A dead Jesus would be so much easier to serve.

Folks, Jesus is the Word and the Word is Jesus. Jesus is alive because His Word is alive. He is immutable, unchangeable, and the same yesterday, today and forever. Know the Word…know Jesus!

“For the word of God is quick, and powerful, and sharper than any two-edged sword, piercing even to the dividing asunder of soul and spirit, and of the joints and marrow, and is a discerner of the thoughts and intents of the heart.” Hebrews 4:12

Interesting, eh? The Word of God is LIVING!

You cannot claim to know Jesus if you don’t know His Word. Jesus is revealed in the Word and the Word reveals Jesus. You cannot love Him and disobey His commandments.

The Historical Jesus makes no demands of His Followers, but the Biblical Jesus does: Take up your cross and follow me…die daily…present your body a living sacrifice…

The Historical Jesus approves of everything you do, including dancing naked to earn a living.

Which Jesus are you following?