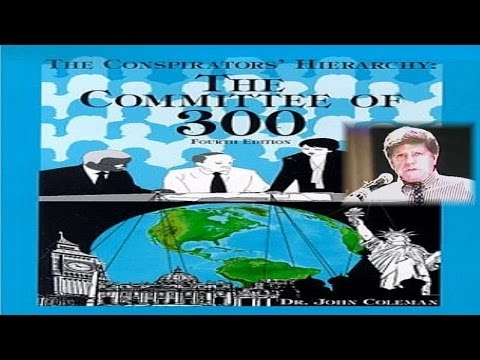 Daniel 7:23 – Thus he said, The fourth beast shall be the fourth kingdom upon earth, which shall be diverse from all kingdoms, and shall devour the whole earth, and shall tread it down, and break it in pieces.

A superb and informative talk that is often overlooked, especially by those newly awakening to the actual reality. During the Bill Clinton years, Dr John Coleman talks about his decades long research to expose the vital facts and machinations behind the mass deceptions used to run and control the ONE world totalitarian government system. Crucial insights that reveal the family names and systems employed to rest the entire resources and people of this world into the grip of a dark group of insane criminal despots, dating back hundreds if not thousands of years. There are references to the use of ELF radiation ( HAARP Tesla Tech) being pioneered back in the 1930’s for mass mind control amongst other uses.

Much of this revealing information is a fabulous reference resource for your own further research, so that you can alert everyone you know. “Global 2000″…..http://www.geraldbarney.com/Global_20… ….Also important is….http://ia700500.us.archive.org/1/item……… think that depopulation is too draconian…. do you know that French scientists have released information mainstream that men’s sperm count has plummeted 33% in just 16 years ( chemtrails, vaccines, GMO, EMF radiation etc…) scientists also have announced it is feasible to make IVF babies with stem cells….get the brave new world picture yet…?

[…]A great insight into the ruling hierarchy of the global system, from the Committee of 300 and the Black Nobility of Venice, to the “clearing houses” of global policy, the Club of Rome and the Royal Institute of International Affairs, and their many branches across the world. Quote by Club of Rome: “In searching for a new enemy to unite us, we came up with the idea that pollution, the threat of global warming, water shortages, famine and the like would fit the bill….All these dangers are caused by human intervention….and thus the “real enemy, then, is humanity itself….believe humanity requires a common motivation, namely a common adversary in order to realize world government. It does not matter if this common enemy is “a real one or….one invented for the purpose.”

Now we can see that Henry Kissenger’s 1974 proposal for using ” Food As A Weapon” in a better context, together with his Eugenics programs for depopulation, seen to the most devastating effect in the 3rd world region. Incidentally, there are dramatically lower cases of cancer in the third world… with less exposure to EMF, GMO, Chemtrails, Fracking, Asparteme, processed food and chemical cosmetics. It is not so easy to fluoridate a well. Time to educate with the truth, and alert everyone to the real agenda of the obscenely rich committee of 300, the Black Nobility of Europe, the Illuminati is real, the Knights of Malta, Jesuits, Zionists, Upper freemasonary etc….

Copyright Disclaimer Under Section 107 of the Copyright Act 1976, allowance is made for fair use for purposes such as criticism, comment, news reporting, teaching, scholarship, and research. Fair use is a use permitted by copyright statute that might otherwise be infringing. Non-profit, educational or personal use tips the balance in favor of fair use.

FAIR USE NOTICE: These Videos may contain copyrighted (© ) material the use of which has not always been specifically authorized by the copyright owner. Such material is made available to advance understanding of ecological, political, human rights, economic, democracy, scientific, moral, ethical, and social justice issues, etc. It is believed that this constitutes a ‘fair use’ of any such copyrighted material as provided for in section 107 of the US Copyright Law. In accordance with Title 17 U.S.C. Section 107, this material is distributed without profit to those who have expressed a prior general interest in receiving similar information for research and educational purposes. For more information go to: http://www.law.cornell.edu/uscode