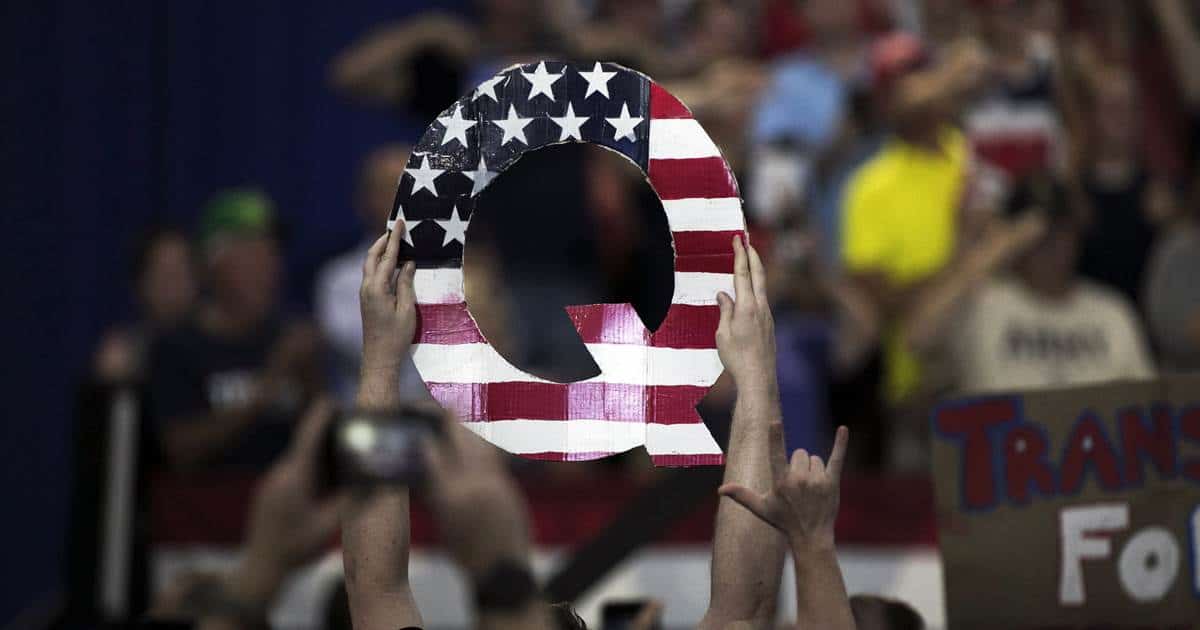 Some basic background on “Q”

According to the Guardian, a user named “Q” started posting messages on the dark web in October 2017. Q is believed by followers to be a person with top secret clearance working in the nation’s energy department. “Q” is a reference to QAnon, a group of people attempting to decode vague, anonymous comments posted on dark web message boards such as 4chan and 8chan. source

“Q” followers are typically evangelical Christians who have become aware of the deep state at work behind the scenes in government.

The general story, outlined in a pro-QAnon video, is that every president before Trump was a criminal in league with the global banking elite, death squads operating on orders from Hillary Clinton, deep-state intelligence operatives, and pedophile rings. According to Q, the military convinced Trump to run for president in an an effort to break the grip of the Cabal.

Q is supposedly revealing top-secret information via “breadcrumb” clues such as the following:

Every dog has its day.

Those of us who have been researching about the occult powers that run the world know that there very much is a satanic cabal working behind the scenes and pedophilia is no “conspiracy theory” but a fact. Still, there are serious problems with this enigmatic entity, as Gonz demonstrates in his video.

In my opinion, “Q” is a spirit, the same spirit that Alice Bailey channeled and came through her writings of 60+ years ago.

I’ve heard that some are now saying Jonathan Cahn is “Q”. I don’t think he is, as “Q” is no single person, but that he is working in the spirit of “Q”.

As I posted previously, Q has most compellingly been shown to be AI (artificial intelligence); a Quantum computer in the clouds The spiritual link being that demons works through electricity/computers. I’m sure anyone who’s worked in a church office has experienced computers going on the fritz whenever an important gospel event is being prepared for, etc…

Something called “Q”-source is a hypothetical collection of Jesus’ sayings, consisting of the common material found in the Gospels of Matthew and Luke but not in Mark. According to this theory, the material was drawn from the early Church’s oral tradition, but its source is likely the Gospel of the Hebrews aka a GNOSTIC gospel.

As Craig Patin noted in a post I shared recently, Mormons are claiming that “Q” is Jesus Christ. Which is telling, since Mormonism is a Gnostic/Qabalist religion, founded by Joseph Smith, an occultist/Qabalist hence Gnostic. Smith having declared that “the glory of God is intelligence (knowledge)“, eternal and uncreated.

So, not unlike every other deception we get to the root of, once again we find ourselves at Qabalah (Kabbalah) – Mystery School thought / Hermetic tradition / The occult – and occultists have aspired toward for centuries now to assimilate all religions, including Christianity into the ONE. They are calling this “the convergence”. We see this taking place within Christianity as Christians embrace “Q” and Trump – (who is also a Kabbalist), the Hebrew Roots Movement and Jonathan Cahn (who some say is “Q”) and Kabbalist mysticism in the church.

Keep in mind that the people who cried for Barabbas instead of Jesus. “Q” can be seen as a modern day Barabbas, aka – man trying to achieve deliverance and freedom  through human efforts. This is where activism misses the mark. I am not saying there isn’t a place to stand up for our freedoms, only that we never lose focus of Who is in charge of the affairs of the earth and that whatever we do, we remain faithfully submitted to His Will.

“For time would fail me to tell of Gideon, Barak, Samson, Jephthah, of David and Samuel and the prophets— who through faith conquered kingdoms, enforced justice, obtained promises, stopped the mouths of lions, quenched the power of fire, escaped the edge of the sword, were made strong out of weakness, became mighty in war, put foreign armies to flight. Women received back their dead by resurrection. Some were tortured, refusing to accept release, so that they might rise again to a better life. Others suffered mocking and flogging, and even chains and imprisonment. They were stoned, they were sawn in two, they were killed with the sword. They went about in skins of sheep and goats, destitute, afflicted, mistreated— of whom the world was not worthy—wandering about in deserts and mountains, and in dens and caves of the earth.” (Heb 11:32b-38)

The Lord our God IS GOD ALMIGHTY! Sadly, “Q”-following believers – many believers for that matter – are missing this! The biggest question to ask of Q, as Gonz asks at the end of his broadcast, “Is it really pointing to Christ? Not really.” He ends his video with 2 Tim 1:7

“For God gave us a spirit not of fear, but of power and of love and self-control.”

God bless you all!

** I anticipate emails informing me that some of Gonz’ work supports sacred names / quantum mysticism, etc. By posting this video I’m not saying I agree with those beliefs. But this video is well-researched and spot on. The “Q” thing is deceiving many people.