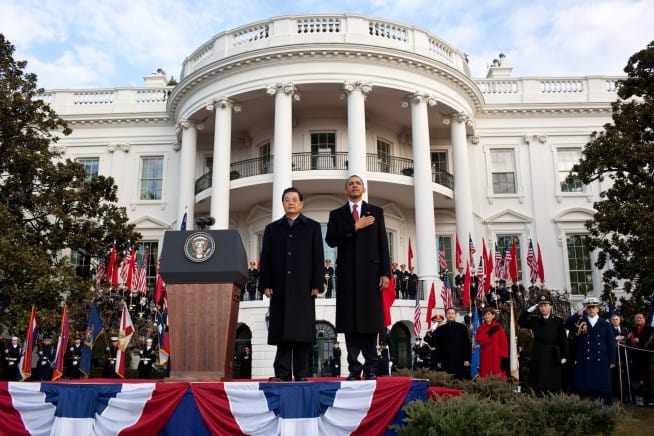 The title is bold, but it is all out in the open. By tomorrow at this time, you will know the entire story and what America will look like in the coming months. Fasten your seatbelt and make sure you store food, water and ammunition because the train has left the station and AmeriKa is headed for a head-on train wreck of epic proportions.

Last night, May 4, 2014,  I interviewed Dr. Jim Garrow, the 43 year ex-CIA veteran who is exposing many NWO plots, at least to the level that his national security oath will let him. In promoting the show, I was purposely vague because I knew where I was going to take the show, because I knew the areas that Dr. Garrow has been speaking about in other interviews. However, I was preparing to take this interview to a level not yet heard on talk radio. I was vague in my show description because I wanted the show to not be taken down by the powers that be. However, the first 10 minutes of my show we were still tampered with as Dr. Garrow, News Director Annie DeRiso and myself all experienced independent and simultaneous communications issues. Dr. Garrow and I subsequently changed our communications venues and the show proceeded.

In a two part series, I am writing a brief synopsis of the last two hours of the interview which will contain some revelations, on my part, that I did not fully cover last night. The reason that some critical issues did not get covered last night is because Dr. Garrow cannot talk about some of the issues because of his national security oath and I did not want to place him in a position of looking like he had been talking about what he is not supposed be revealing. As it was, Dr. Garrow refused to answer 5 questions I put to him last night in deference to his national security oath.

After this two part series has a chance to circulate, I will release the second and third hours of the interview late tomorrow night or on Wednesday morning.

Information Not Yet Revealed

Since early last August, I have been holding on to some information that I was told I better keep quiet unless I was able to collaborate some of the information with another well known source and this was necessary for my own personal safety. To be the sole purveyor of this information would have placed me in a greatly compromised position similar to Breitbart, Hastings and Clancy. After nine plus months, it is a relief to finally get this out into the public arena.

Cliven Bundy sits on land that is mineral rich in addition to being selected to be a Solar Energy Zone controlled by the Chinese energy company ENN. Dr. Garrow revealed that there are already Chinese soldiers in Nevada and are involved in what is happening in relation to these Chinese Solar Energy Zones.

Dr. Garrow also revealed that the Chinese have been promised control over all of our underground and surface mineral resources. The Bundy Affair is critically important because it exposed critical elements of the turnover of this country’s wealth to the Chinese in payment for our debt to China. ENN is controlled by the Chinese government/military.

Soon, China will own every important aspect of American wealth and those of us that remain alive following the coming purge will be living in a third world country. Notice what I just said here, (1) those of left alive. and (2) living in a third world country. In Part Two of this series, I will be revealing exactly how this will happen. Let me just suffice it to say that gold, all forms of energy, water and food production will become a part of the Chinese takeover as will the breakup of the Federal Reserve in a divestiture of such a magnitude, that it has never before seen in the modern world.

The readers may recall that I recently wrote an article in which I noted that these Chinese Solar Energy Zones were near a CANAMEX Corridor transportation system, backed up next to a major military installation and were mineral resource rich. The American military will be forced to join the Chinese takeover. The highway system is important from a military perspective in order to quickly move troops and material to needed areas of insurrection. Now does it make sense as to why there is a purge of the military leadership taking place in which over 260 senior level military officers have been fired by Obama? Does the John Warner Defense Act make sense to you now because it allows the use of US troops on American soil for policing duties which will be needed to put down any resulting rebellion? Do you think that the DHS acquiring over 2 billion rounds of ammunition to go with their 2700 armored personnel carriers makes any sense in light of this information? And I have been told that Tom Clancy had all of this information and more and this is why he was killed because he was writing a book about all of this. If you are still connecting dots, let me put this in very simply terms, there is going to be a civil war and it is going to happen soon.

Further, Dr. Garrow acknowledged the connections between these Chinese Solar Energy Zones and land rich in mineral resources. I have also previously written an article in which I identified how the United States has hundreds of trillions of dollars of estimated buried resource wealth beneath the surface and our government refuses to touch it. Our government refuses to access these underground treasures because they have been promised to the Chinese in repayment of the debt owed to their country.

The Crisis in Ukraine

Putin has Eastern Europe knuckling under to his will. Both Dr. Garrow and I agree that this will cause the breakup of NATO and Putin’s military will run unopposed through Europe. I asked Dr. Garrow about the window we are in with regard to NATO consolidating forces necessary to oppose a Russian invasion, through a series of war games, in Moldova, Ukraine, Bulgaria and Poland this coming June/July. If Putin is going to control Ukraine, which accounts for 66% of Russian gas flowing into Europe, he cannot allow NATO to consolidate its forces and oppose his takeover plans of Ukraine. Dr. Garrow did comment on this point, however, I have multiple insider sources stating that this is an accurate assessment. I have been told that there is a window of about 4-5 weeks until Russia attacks Ukraine. If Putin misses this window, he will have to be content to continue to erode the Petrodollar because NATO will be significantly entrenched enough to easily roll over Ukraine and Eastern Europe. Putin is bold and impulsive and the slow approach of eroding the Petrodollar does not fit his personality. Putin will attack Ukraine.

Obama Could Have Saved Europe From Russia

Dr. Garrow revealed that Obama has both the ability and authority to order the capture the 30% bleed off and to liquefy the natural gas and ship it Eastern Europe and undercut the Russian price on natural gas. This would have halted Putin in his tracks. This would have been similar to what Truman did to keep Berlin open in 1947 when the Russians shut down outside access to Berlin and Truman initiated the Berlin Airlift. However, being the traitor that Obama is, he refused to act to save Eastern Europe. As a result, both Dr. Garrow and my insider sources believe that it is just a matter of time until all of Europe is subservient to Putin’s re-emergence of the Soviet Empire. This speaks to the fact that we do indeed have a traitor in the Oval Office. Europe will soon fall to Russia and America will fall to China. This is the real New World Order!

America is being carved up like a Thanksgiving turkey and one has to wonder where is the Federal Reserve in all of this? Since they have owned this country since 1913, shouldn’t we be hearing about their role in all of this? Isn’t it interesting that Harry Reid, according to Dr. Garrow, is facilitating all of these Chinese Solar Energy Zones and not the Federal Reserve. What is going here would be like you having a garage sale, but the Chinese are in your house and your backyard and they are the ones determining what you will be selling in your driveway. Yes, that’s right, the Federal Reserve is dead as we know it and Part Two will reveal the relevant details.

To sum up, Part One details how the Chinese are on the verge of controlling all American energy and meaningful resources including our military. Russia will soon be controlling Europe and both Chinese and Russian forces will be imposing their will on the American people in the coming months.

You now know about 25% of what has been revealed to me. Patience is a virtue, because what I am about to reveal tomorrow will change the face of America, forever!

Part Two will discuss the coming EMP attack, currency collapse and actions of both Chinese and Russian military forces. Once Part Two is published, it will be clear to those who regularly read my column how I have written about various aspects of this coming takedown of America since last August. And in case anyone is wondering, this information has been disseminated to trusted sources for all the appropriate reasons.