(above) The Google Doodle for the Chinese New Year.

Hidden in the Crag | C.A. Patin

The pig is the final symbolism of the 12 zodiac signs. This means its the end of their cycle. You can see the other 11 signs underneath and besides the pig. The doodle starts off of what looks like a hand that looks very similar to the “horns” hand sign.

And once you see what you’re looking at, yes it does look like the horns of Baphomet. Also notice the curly q symbolism on the nose and face of the pig that looks like the pedophilia boy love sign. You can also see the bull to the far right have these same symbols for its nostrils. What does the year of the pig mean? 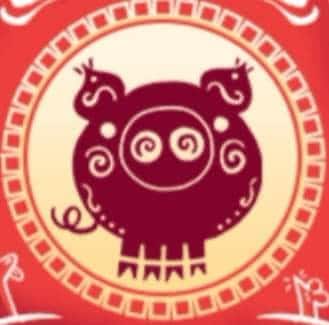 My guess is the year of the demons. Remember what happened to Legion in Gadarene? And legion…where have I heard that before? Oh yeah, the anonymous god Q.

Luke 8:30-33 “And Jesus asked him, saying, What is thy name? And he said, Legion: because many devils were entered into him. And they besought him that he would not command them to go out into the deep. And there was there an herd of many swine feeding on the mountain: and they besought him that he would suffer them to enter into them. And he suffered them. Then went the devils out of the man, and entered into the swine: and the herd ran violently down a steep place into the lake, and were choked.”

Lastly, there is a connection to a pig and the Temple in Jerusalem. As we all know the Masonic Edomite Jews are making a huge push to build their temple of Herod replica. If you go back to the Syrian, Antiochus Epiphanies, you will remember he sacrificed a PIG in the holy of holies to Zeus/Jupiter. Ironically, the pigs in the scripture above were used for sacrifice at the Temple of Jupiter/Zeus. You can see the Antiochus connection to this story. So we now have the year of the pig and they are still pushing for their temple of Herod. And don’t forget, we have the “Gridiron Maccabee” Edelman (#11, twin pillars, chaos) winning the MVP. I guess it really is the year of the pig.