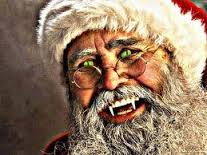 (Above, Even Santa conceals something sinister)

Recently, I was thinking back to the days when we would go Christmas caroling with other families from church. Maybe you remember too. Another excellent article by Henry Makow.

For the record, I believe that it is part of the cabal’s agenda to expose the Illuminati and ‘awaken‘ humanity in a very particular light.

I am old enough to remember when Christmas was a joyous religious celebration of the birth of Christ and the Gospel of Love.  The suppression of Christmas is a symptom of the cancer that infects mankind. We have been subverted by a satanic cult, the Illuminati, that is responsible for war, terror and cultural degradation in general. Society is  satanically possessed.  We can resist by celebrating Christmas more vigorously than ever.

The spirit of giving now is confined to exchanging gifts. Scarcely is there a mention of Christian love. We can’t even say “Merry Christmas.” That might offend some people, Satanists perhaps. God is Love. Satanists aren’t big fans of Love. They have a lot of clout.

This year (2016) it seems we have thrown in the towel and resigned ourselves to celebrating the “holidays.” There are fewer decorations and carols.  77% of Americans identify as Christians but it seems only minorities have rights. Only minorities can be “offended.”

We don´t even hear the usual protests. It’s been a seamless transition. Christmas celebrations, once so intense and beautiful, have become a thing of the past. None of this is by accident.

Incredible and bizarre as this sounds, a satanic cult, the Illuminati, rules the world. The Illuminati consist of  Cabalist Jews and their Freemason go-fers who are empowered by the central banking cartel, namely the Rothschilds, Warburgs, Rockefellers etc.

While they pay lip service to religion, they worship Lucifer. Their agents control the world’s media, education, business and politics. These agents may think they‘re only pursuing success, but success these days often literally means serving the devil.

This conspiracy would not be possible without the active complicity and passive acquiescence, not to mention the venality and credulity of most Gentiles.

Prisoners of their wealth, the Illuminati pretend to be moral while working to enslave humanity in a New World Order. The Protocols of Zion is their blueprint. 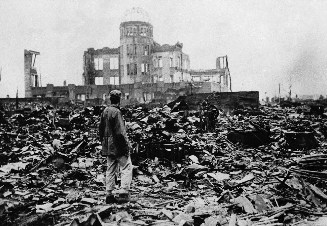 Hiroshima, Dresden, Auschwitz were sacrifices to their god Lucifer. They are responsible for the two World Wars, the Great Depression and the Cold War; Sept. 11, and the Iraq, Afghanistan, Syrian and Ukrainian wars.  Illuminati Jews (NeoCons) seem to be preparing a Third World War. They have to destroy the world because they can’t abide a world that isn’t cast in their image.

Satanists are motivated by hatred of God and humanity. They turn good and evil on its head as way of spitting in God’s eye and serving Lucifer. They define man as an animal governed by base instincts and deny the existence of our soul and spiritual ideals. They acknowledge the existence of God but deliberately defy and displace Him.

Their goal is to invert reality so that healthy is made to seem perverse; natural seem unnatural; beautiful seem ugly; and truth seem lies, and vice versa.

Essentially these Satanists want to redefine reality according to their self interest and perversions. This is the cancer from which we suffer.

The Illuminati created Communism as a prototype of the New World Order. Karl Marx was hired to sell totalitarian rule (“the dictatorship of the proletariat”) by pretending to espouse equality. He was a Cabalist Jew and Satanist as were Trotsky, Lenin and Stalin. 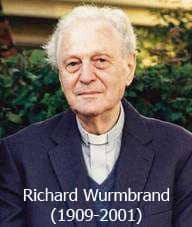 In his book, Marx and Satan (1986) Richard Wurmbrand, a Jew who converted to Christianity, illustrates Marx`s true hatred of God and humanity. As early as 1848, Marx wrote about a “coming world war” that will eliminate “riffraff” like Russians, Czechs and Croats.

“The coming world war will cause not only reactionary classes and dynasties, but also entire reactionary peoples, to disappear from the face of the earth. And that will be progress…the revolution…cares as little about the human lives it destroys…as an earthquake cares about the houses it ravages. Classes and races that are too weak to dominate the new conditions…will be defeated…their very name will vanish.” (42)

In his poem Human Pride Marx writes that he will “wander Godlike and victorious through the ruins of the world… I will feel equal to the Creator.”(31)

Wurmbrand, a pastor who was imprisoned in Romania, says Communism is Satanism empowered. Christians weren’t just brutally persecuted and murdered, they were made to blaspheme. Communism’s goal, the goal of the New World Order, is to mock God and to praise Lucifer. A Communist newspaper confessed,”We fight against God: To snatch believers from him.”(77)

According to Wurmbrand, the Russian Revolution was a time when

“love, goodwill, and healthy feeling were considered mean and retrograde. A girl hid her innocence, and husbands their faithfulness. Destruction was praised as good taste, neurasthenia as the sign of a fine mind. This was the theme of new writers who burst on the scene out of obscurity. Men invented vices and perversion, and were fastidious in their avoidance of being thought moral.” (85)

The Luciferians portray their rebellion against God and nature as progress and freedom. This permissiveness refers only to tearing down the Divine order. In the initiation into the Seventh degree of Satanism, the adept swears, “Nothing is true and everything is permitted.” In the Communist Manifesto, Marx said all religion and morals will be abolished and everything permitted.

DIALOGUE WITH A MASON

One of Richard Wurmbrand’s brothers attained the highest ranks in the Jewish lodges of the Masonry and became grand Master. One day, the two brothers, one Christian, the other Freemason, had a very vivid discussion.

RICHARD-  How could you conceive that the few millions Jews take over and control and govern the almost five billions non Jews? 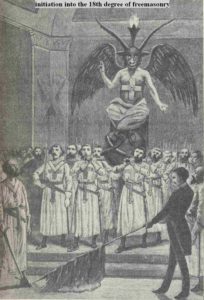 BROTHER- We have enough adepts. Some of them know they are our men, others do not, but all of them are at our disposal, and we’ll be their god. We created the Freemasonry and Communism; and through Communism, Capitalism, Materialism and Humanitarianism, we already gave a Jewish spirituality to the whole world. Day after day the world is more and more Jewish. We, the Jews, we are the ferment of the 20th century.

RICHARD- The  Messiah already came for us.

BROTHER– No. That one was a traitor to the chosen people.
Because the Jewish people even is the Messiah!

RICHARD– The Jewish people is full of sins and disobey the commandments we received from the God of Abraham, Isaac and Jacob, therefore this people cannot be Messiah, the saint and perfect. That perfect and saint was and remains only Jesus Christ.

BROTHER— We hate you, the Christians, and you, Richard, you are a traitor to our people. When we shall build again the Temple of Salomon, we shall build in the city of Jerusalem the highest monument in the world, and on it shall be written: “Never forget what the Christians did to you.”

RICHARD– You will destroy yourself. There is no more heaven for you, because beyond your materialism you have no other aim, no ideal.

Satanists have conditioned us to short circuit at the mention of religion. They’ve made God seem mysterious, unknowable or non-existent. 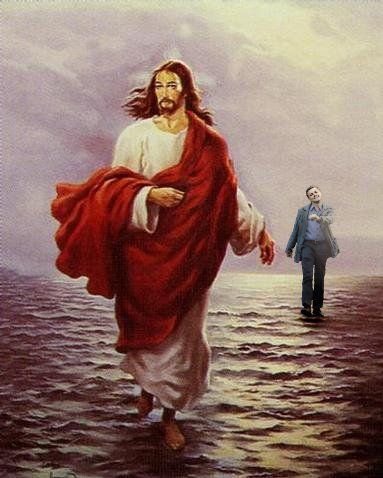 Christ said, “God is a Spirit, obey Him in spirit and in truth.” (John 4:23,24). God is Absolute Love, Truth, Justice, Goodness and Beauty. If you believe these things are real, whether you accomplish them or not, you believe in God.

Love is the principle of human evolution. God wants to be manifested by His creation. “Be ye therefore perfect, even as your father who is in heaven is perfect,” (Matthew 5:48). The more we embody spiritual ideals, the more God-like and Real we become. The opposite is also true.

We are being degraded and prepared for slavery or destruction. The mass media (movies, music and video games, TV) creates an alternate fantasy and suppresses reality. The obsession with promiscuity, nudity, bodily functions, ugliness, discord, violence, trivia, gender bending and homosexuality constitutes a relentless satanic assault on our mind and soul. We are being inducted into a satanic cult.

If our leaders weren’t Luciferians, the media and the arts would be preoccupied with issues of truth and falsehood, good and evil, beauty and ugliness. We would be uplifted and inspired. History would be exposed not suppressed.

Instead, our souls are fed sawdust, starved of positive role models and inspiration. We are treated like cattle.

This is what the Illuminati fears. In the Protocols of the Elders of Zion (5) the author writes:

“There is nothing more dangerous to us than personal initiative; if it has genius behind it, such initiative can do more than can be done by millions of people among whom we have sown discord.”