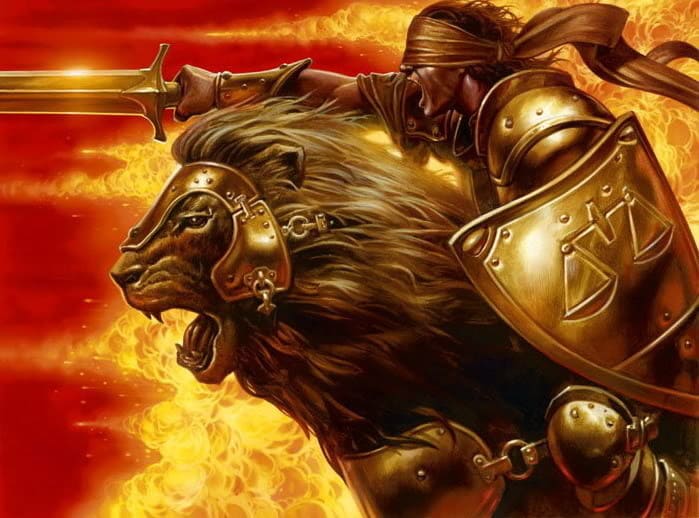 “Behold, the Lord hath proclaimed unto the end of the world, Say ye to the daughter of Zion, Behold, thy salvation cometh; behold, his reward is with him,
and his work before him.”

Does the thought of spiritual warfare frighten you? Do you avoid it, feel inadequate, hope that it doesn’t come against you, avoid situations that might put you in the midst of it? Are you hesitant to share the gospel because you doubt your ability to respond to the questions that might arise, or doubt your knowledge of the Word? Or do you find that you are simply not excited about the gospel, and feel ashamed because you know you should be? (That one will take a whole lot of honesty to answer.) I think if we’re honest, that most of us have had these feelings and I think that these feelings are very effectively preventing Christians from living a victorious, Holy Spirit Power filled life!

Spiritual warfare is a reality from the beginning to the end of scripture. But there has been massive neglect in training believers to understand the nature of spiritual warfare in the life of the Christian. As a result, believers are ill-equipped to deal with the realities that surround them today.

Since my experience beyond the veil I’ve become acutely aware of the enemy’s workings on earth, and I’ve tried to make people aware of the radical, insane level of evil going on around them and how it is all leading to a cataclysmic end (the end of our era). I have been astounded at the fact that so many are so diligently opposed to facing reality. I get comments like “we shouldn’t focus on the devil, we should just keep our mind on Jesus” encouraging me to look away from:

Stories about the torture and murder, and martyrdom of innocent believers (safely across the ocean in other countries)

Poisons in our food, water and air which is not merely being caused by the pollution of excess living, but rather by purposeful poisoning

Cell-killing, brain damaging power of EMF waves and the mind control coming from our televisions and music and other things

I’ve tried to get the word out; “People! Wake up! The enemy is taking over the world, he is manipulating our thoughts and plans to turn the world and all humanity into mind controlled slaves!”  And I’ve ended up being about as effective as Chicken Little screaming that the sky is falling. Most of my warning has landed on deaf ears.

People do not want to know

Why? I can think a few reasons:

People choose to remain willfully ignorant (2 Cor 2:11) to the devices of the enemy because they are afraid

They are mesmerized by the world, manipulated by mind-numbing technologies and by false teachers in the church preaching “peace and safety” and a “good plan for their life”

They do not understand the nature of this world, reality, and what the Word of God says about spiritual warfare

They do not know their authority in Christ. They have not been taught.

They do not understand their responsibility in Christ. They have not been trained.

Ignorance has left Christians silent and suppressed. This ignorance will become all the more dangerous as the deception becomes much stronger in the days to come, when extradimensional beings appear, claiming to be our extraterrestrial creators and savior from an ancient, more highly evolved world. (What an unimaginable end game of the lie of evolution!) Christians who are unaware of the spiritual warfare going on will have their faith challenged and very possibly destroyed by massive demonic counterfeit gifts, signs and lying wonders of that day!

“For there shall arise false Christs, and false prophets, and shall shew great signs and wonders; insomuch that, if it were possible,
they shall deceive the very elect.”
Matthew 24:24

If nothing else, the horrific things going on in the world today are serving to unmask the reality of evil, of satan, of the very real spiritual battle we are all in,

It serves to show us exactly what Jesus came and saved us from!!

“The son of God was made manifest to destroy the works of the devil”!
1 John 3:8

And it is causing many who are aware to pray for a great awakening and revival of God’s people!

Anyone encouraging you not to look at what is going on in the world is depriving you of the truth  and reality that spiritual warfare has been a fact of your life all along! While we remain unaware, the enemy wins battles and gains ground in our homes, our churches and our nation! Only now, in these end times, God is slowly removing that which has been restraining this intense evil since the flood and the conquest of Canaan. The true nature of the battle that we are in is being made manifest in our day.

But Halleluiah! Jesus won the war!

“Forasmuch then as the children are partakers of flesh and blood, he also himself likewise took part of the same; that through death he might destroy him that had the power of death, that is, the devil; And deliver them who through fear of death were all their lifetime subject to bondage.”!
Hebrews 2:14-15

Jesus destroyed the power of the devil. We’ve been set free from fear of death. And we remain in the world to engage in the battle, to preach the good news, to occupy until he comes to claim his bride! Those sounds like Sunday School words that have never really hit home for most of us because we were not provided a correct worldview.

Most simply put, God is the truth and everything outside of God is a lie. In the beginning was God. Everything was created by Him. Lucifer is a created being. God created Him. God named him. In Ezekiel 28 we can read about the fall of Lucifer.

“… From the day you were created you were blameless in your
ways until wickedness was found in you. …” Ezekiel 28:15

Satan was the first one to sin, to step away from the source of life. He initiated it. In his desire to be God, he deceived mankind into turning away from God and following him to futility and death. He did it with lies.

Man was created in victory and freedom. Death, disease and suffering were things he had no concept of. He answered to no one but his loving creator, who gave him one vital instruction:

“But of the tree of the knowledge of good and evil, thou shalt not eat of it: for in the day that thou eatest thereof thou shalt surely die.” Genesis 2:14

Man did not sin on his own. He sinned as the result of temptation offered by satan (a title, meaning “adversary”). When man chose to listen to the words of satan and disobey the instruction that had been given to him by God, satan won the legal rights to mankind. Man was living in a beautiful world that God had created for him as an eternal being, brilliant and spiritual, and he exchanged God for a liar who wanted to be god. He exchanged the Word of God for the doctrine of satan. The Spirit of God left and the sin code, the death code of satan’s rights came into us. Satan is the god of this world, by legal right. That, dear Christian, is reality! But in Colossians 1:12 we are told that Jesus plucked us out of the dominion of darkness, rescued us, and transferred us into the kingdom rule and reign of Christ!

“Who hath delivered us from the power of darkness, and hath translated us into the kingdom of his dear Son,in whom we have redemption through his blood, even the forgiveness of sins”
Colossians 1:11-12

This is reality. We were born into futility and death. We were born in bondage to satan, and his sin code was written in our hearts. The things of this world that we fuss and fight over, struggle to attain or are afraid to lose, are nothing more than futility. It is all corruptible and it is all passing away. I saw this very clearly when I went beyond the veil.

The people in the early church understood what they had been delivered from. They were so excited they couldn’t keep it to themselves!

“Therefore they that were scattered abroad went everywhere preaching the word.”
Acts 8:4

The only way to silence them was to kill them! What a contrast from the church in America today!

Do not be ignorant to the devices of the enemy today. Know what’s going on, that way no one can deceive you. Don’t accept the gobbety-gook teachings of the cult-church of happiness. If you believe you have a relationship with Jesus but you haven’t ever really broken down in tears of repentance over your sin, take the time to talk to him right now. Ask him to reveal anything in your heart that you need to be forgiven for and cleansed from, anyone who you need to forgive, any judgments you need to repent of. He wants you to be free! He wants you to be victorious! He loves you so very much!

Once you have truly laid your life at the savior’s feet, get up and look around you! There are so many who are still slaves of the enemy in the world around you! If you don’t know anything more to say, at the very least let them know that God loves them, and that Jesus can set them free! Then spend time in your Bible and STUDY! Learn about who you are in Christ and the authority you have been given! If they don’t offer it at your church, you can find so many resources online. Find a good teaching on prayer and spiritual warfare and sign up, go to it, or listen to it, whichever the case may be.

The end of the age is upon us. Sticking our heads in the sand won’t make the reality go away. But if we are in Jesus Christ we have nothing to fear! Rather, we ought to be excited, because he is coming back soon! But there is much work left to do! So let’s do what we have been called to do and pray for the lost, for our country, for our persecuted brothers and sisters. Let’s share the great news of deliverance and freedom from darkness that is ours. Let’s rise up  and turn from fear, church! There is great and mighty power in the name of Jesus!

“And when these things begin to come to pass, then look up, and lift up your heads; for your redemption draweth nigh!” Luke 21:28