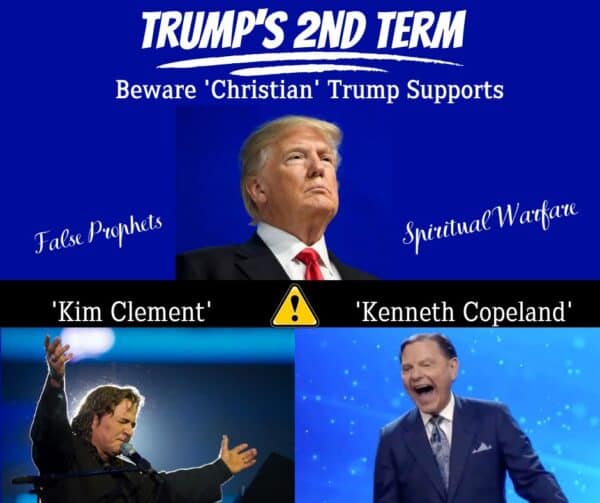 While conservative Christians are lamenting a Biden win and waiting with baited breath for a last minute reinstatement of Trump, they are missing a must greater evil; spiritual deception. Just yesterday I was reading in Revelation chapter 12, particularly verses 13- 15 about the woman, who represents the church. The passage begins with the woman being persecuted:

“And when the dragon saw that he was cast unto the earth, he persecuted the woman which brought forth the man child.

And to the woman were given two wings of a great eagle, that she might fly into the wilderness, into her place, where she is nourished for a time, and times, and half a time, from the face of the serpent.” Rev 12:13-14

But then; the serpent casts water as a flood out of his mouth as a flood:

“And the serpent cast out of his mouth water as a flood after the woman, that he might cause her to be carried away of the flood.” Rev 12:15

“Water as a flood?” I’ll be talking about this more in the near future because there’s a lot here, but for now I just want to again point out the true upcoming danger for the church, which isn’t persecution, like so many are focused on. Of course the thought of persecution is terrible, but if we’re really taking the Word of God as our guide we know that Christianity shines most brightly in times of persecution. No, the greatest danger the church is facing not persecution but deception. I turned to Matthew Henry’s notes on the above verses.

12:13 persecuted the woman: Observe the care that God had taken of His church. He had conveyed her as on eagles’ wings into a place of safety provided for her, where she was to continue for a certain space of time.

12:15 water as a flood: This is thought to be meant of a flood of error and heresy, by which the church of God was in danger of being overwhelmed, and carried away. The church of God is in more danger from heretics than from persecutors; and heresies are as certainly from the devil as open force and violence. (emph added)

In this article, Cheryl Devine Tuumalo very much expresses what I recently shared about a Trump win in “Are the Seven Mountains in Trouble?”

Oh what a deceptive time we live in. My spirit is heavy right now, because of what I believe is coming. And it’s not about the ‘Riots and Chaos’. If you are a ‘Christian’ who is supporting Trump, please pray and ask the Father for discernment and spiritual sight. I still believe that Trump will remain in office, even though no one knows that for certain. Yes, we know that Biden and Harris are wicked ones. However, so many more will be deceived, when all these false Prophet’s prophecies come to past, if they give the win back to Trump through the courts or the electors, which most likely will happen, due to the obvious fraud that has been placed out there for us to see.

Many will be praising ‘God’ for ‘saving us’ from Biden and Harris. Since far too many idolize this man Trump. Sadly so many believe that ‘God’ sent him to ‘buy us more time’ even claiming he is the ‘chosen one’. When we read the scriptures it tells us that satan is the god of this world, and he is in control, for now, until the King of kings returns, Ephesians 2:2, 2 Corinthians 4:4, 1 John 5:19, and John 14:30.

Most don’t even understand that ALL these presidents come from the same royal bloodline. What we are watching is the ‘Good Cop-Bad Cop’ technique being play on the people. Trump is carrying the ‘Protective’ attitude while Biden is carrying the ‘Aggressive’ attitude, but they are both still cops, they have the same boss. We need to see this.

Has satan been revealing his plans through these false prophets? There are so many that have prophesied that Trump will win a 2nd term. Even a few weeks ago, there was an article that said. “Donald Trump will WIN ‘miracle’ second term in US election 2020 claims leading PSYCHIC” -Express co UK October 22, 2020. So it’s not only so called ‘Christians’ that are prophesying this. There are tons of New Agers that also idolize Trump as well. So many have fallen under the spell that is sweeping over the world.

I want to share what happened this past Sunday…. Kenneth Copeland spoke to his followers about Biden winning and went on a Demonic Laughing fest for about 1 minute straight and ended with,

Why, because this man, who reeks of demons, seems to know satan’s plan, remember his talks with Tony Palmer and Pope Francis? That was back in March of 2014, then a few months later Tony Palmer died. Copeland is one of satan’s superstar minions.

NOW, I have to talk about the Kim Clement, since he would be the most known name for this Trump Prophecy, he claimed to be a modern day prophet of God. He was involved with the NAR (New Apostolic Reformation) which is a dangerous movement. He died at the age of 60 on 11-23-2016, from a brain bleed, two weeks AFTER Donald Trump won the election. Many are talking about him in the ‘Christian world’ because he prophesied that Donald Trump would not only become president but he would win the 2nd term and even more. Kim is nothing more then a False Prophet. So who is revealing all of this information to him? It’s not the Most High, so it has to be the god of this world, satan. Also note that Paula White endorses Kim as well. Many of these mainstream Pastors, Teachers and Prophets on TV are false light workers of satan. Remember they ‘broadcast’ these ‘programs’ on the ‘television’, rethink the meaning of these words with spiritual eyes. And if you think Kim is of the Father, then you need to read one of the most dangerous prophecies Kim uttered, about Pope Francis and unity, calling him ‘God’s Chosen’, but that’s another post, I’ll leave the link to that in the comments.

In 2007 Kim Clement claimed to receive a prophetic word about Trump. Sadly so many ‘Christians’ have fallen for this, believing it’s from the Father. Think about these words, are they from the Most High OR from satan…

“For God said, ‘I will not forget 9/11. I will not forget what took place that day, and I will not forget the gatekeeper that watched over New York, who will once again stand and watch over this nation,’ says the Spirit of God. ‘It shall come to pass that the man that I shall place in the highest office shall go in whispering My name. But God said, when he enters into the office, he will be shouting out by the power of the Spirit. For I shall fill Him with My Spirit when he goes into office, and there will be a praying man in the highest seat in your land.” (source)

We can’t rule out anything. With Biden being a self proclaimed Catholic, it would be very fitting for Bible prophecy. So I can see it going both ways. We will just continue to watch.