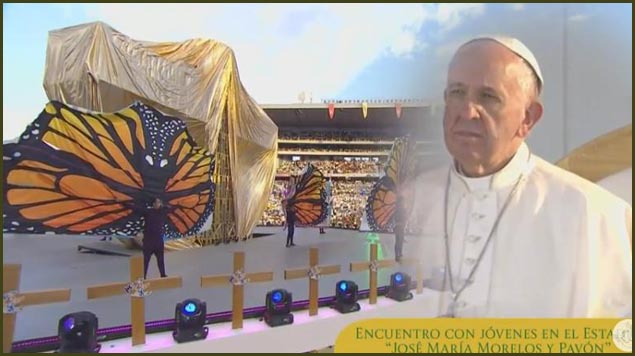 The symbolism in this Welcome to Mexico for the Pope is quite disturbing to anyone who knows anything about Monarch Mind Control. Obvious to the average person are the appearance of “demons” on the backs of the monarch butterfly costumes worn by the children. According to the article (link below), the monarch butterfly is a status symbol in Morelia (Mexico) where this event took place.

In occult symbolism, gold is a very powerful color. Occult tradition holds that Satan has a golden aura. Gold is the color of the Sun and the element fire. In Satanic alchemy, gold represents ‘perfection of the soul’. Gold obviously also symbolizes wealth and power. What is the meaning of the massive golden cross covered with a golden blanket, then unveiled?

With much of the church embracing Ecumenism, which includes the Catholic Church as part of Christianity, I hope people are paying attention to these increasingly blatant displays that identify the true spirit behind the Roman Church and it’s Pope. History of the 68 million people tortured and murdered by the Catholic church before (and during) the days of the Reformation has been all but scrubbed from public record, but you can still find it in Fox’s Book Of Martyrs. Reformers were convinced that the Roman Catholic Church was antichrist. I plan to write more about that in a future post. But I want to add that I am referring to the organization. I believe there are sincere Catholics who love Jesus Christ and are naive to the evils of the church of Rome.

This needs no words. 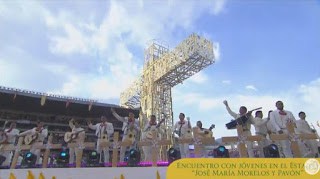 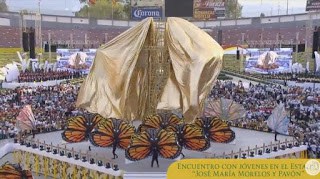 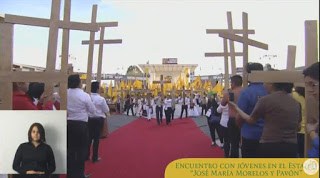 Symphony Orchestra , dancers and the unveiling of a monumental cross provided a framework to conclude the meeting of Pope Francis with youth in Morelia, Michoacan.
read more