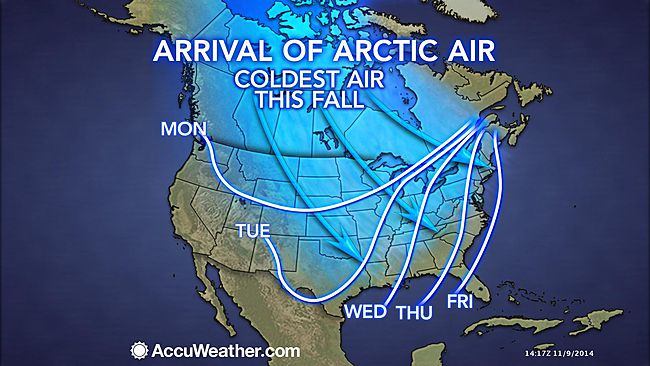 An overview of the weather across the North Central region is given in the above AccuWeather.com video.

As the polar vortex gets displaced to the south, the door will open for arctic air to plunge over the most of the United States as the new week progresses.

Only the Southwest, Hawaii, Alaska and South Florida will escape the grip of the upcoming arctic blast that the polar vortex can be blamed for.

“The polar vortex is a large pocket of very cold air, typically the coldest air in the Northern Hemisphere, which sits over the polar region,” stated AccuWeather.com Senior Meteorologist Alex Sosnowski.

“Occasionally, this pocket of very cold air can get dislodged farther south than normal, leading to cold outbreaks in Canada and the U.S.”

For this current outbreak, the harshest cold in relation to normal will encompass the northern Rockies and Plains. However, temperatures will also plummet throughout the Northwest and to the Gulf Coast and I-95 corridor.

The arctic blast will drop into the northern Rockies on Monday, accompanied by a snowstorm on its leading edge, then will spread across the Northwest and Plains through Wednesday.

Later in the week is when the cold will reach the I-95 corridor, but it will not be of the same magnitude as earlier in the week.

Many communities across the northern Rockies and Plains will experience a 20- to 40-degree drop in high temperatures from one day to the next.

Tuesday and Wednesday will prove to be the coldest days of the week across the northern Rockies and northern High Plains, where highs will be held to the teens with subzero lows.

“The combination of cold air, wind and other conditions, including snow in part of the Midwest and northern Plains, will send AccuWeather RealFeel® temperatures plunging into the single digits and teens.”

“Such cold will raise the risk of hypothermia and frostbite for those not properly dressed,” Sosnowski continued.

Across the Northwest, South and I-95 corridor, the arrival of the cold air will create a December-like feel with a 10- to 20-degree change in high temperatures from the preceding day.

While the chill in the South and East will not be as extreme as what communities to the west are bracing for, Sosnowski is still urging people to winterize their vehicles and plumbing. 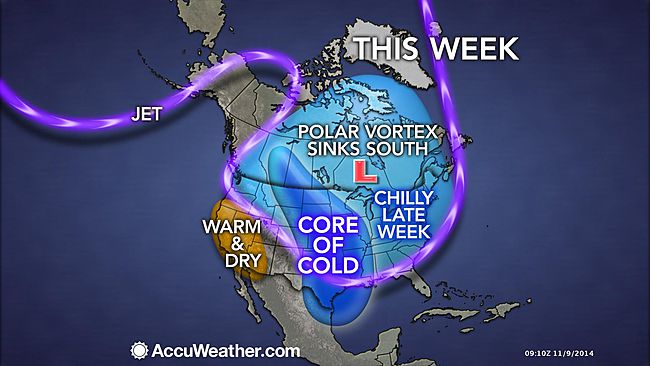 “Freezing temperatures are possible in parts of the South and East that have not yet had such temperatures this season.”

Once the frigid air arrives, it will not be quick to depart.

Temperatures are expected to remain below freezing for nearly two weeks in the Upper Midwest, Minneapolis included.

The impending cold may set off lake-effect snow downwind of the Great Lakes later next week, when AccuWeather.com meteorologists are also monitoring the potential for a storm to bring a bit of snow to other parts of the Northeast. 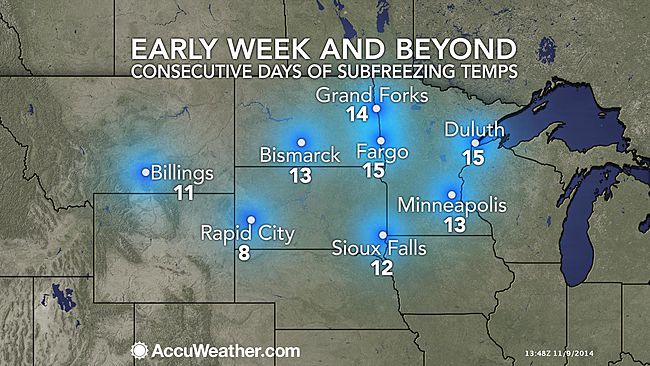 Latest indications also point toward another winter storm crossing the nation next Thursday to the following Monday. With the cold air still in place, there could be a swath of snow stretching from the Northwest to the central Plains to the Northeast.

Know when any rain, snow or ice will reach your community by using AccuWeather’s MinuteCast®. It has the minute-by-minute forecast for your exact location.

Enough cold air could even be in place for ice to glaze Portland, Oregon, and snow to fly around Seattle, Washington.

Continue to check back with AccuWeather.com for the latest details on the cold outbreak and any snowstorms.