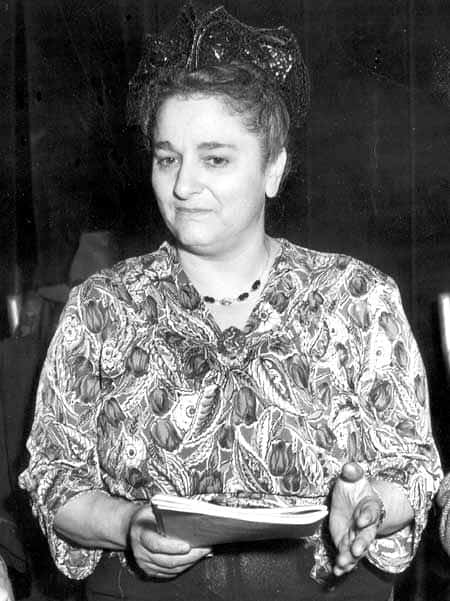 The war on “terrorism” is designed to transform society into a Communist police state.

In 1954, Bella Dodd, a high ranking defector from the US Communist Party, warned us that Illuminati Jewish bankers
are behind Communism, and this satanic cult controls the USA.

Her book “School of Darkness” requires a revisit.

“The objectives of Communism are being steadily advanced…The individual is handicapped by coming face to face with a conspiracy so monstrous, he cannot believe it exists.” -J Edgar Hoover (1956)

Bella Dodd was a leader of the Communist Party of America (CPUSA) in the 1930′ s and 1940’s. Her book, “School of Darkness” (1954) reveals that Communism was a hoax perpetrated by financiers “to control the common man” and to advance world tyranny. Naturally this important book is out-of-print and not in any used bookstores. It can be read online here.


Bella Dodd was born Maria Asunta Isabella Visono in Italy about 1904. A brilliant and dedicated woman, she graduated from Hunter College and NYU Law School. She became head of the New York State Teachers Union and was a member of the CPUSA’s National Council until 1949.

Dodd describes Communism as “a strange secret cult” whose goal is the destruction of Western (i.e. Christian) Civilization. Millions of naive idealists (“innocents”) are tricked by its talk of helping the poor, but it cares only for power. For example, Dodd found there was no social research at party headquarters. “We are a revolutionary party, not a reform party,” she was told. (163)

CREATING “HUMAN BEINGS THAT WOULD CONFORM”


The Communist Party operates by infiltrating and subverting social institutions like the churches, schools, mass media and government. Its aim was “to create new types of human beings who would conform to the blueprint of the world they confidently expected to control.” (162)

For example, Dodd reveals that the CPUSA had 1100 members become Catholic priests in the 1930’s. It also subverted the American education system by taking over the teacher’s unions and learned societies. Only people who accepted the “materialistic, collectivist international class struggle approach” advanced. (98)

Involving women in the war effort fitted the long-range program:

“The party did all it could to induce women to go into industry. Its fashion designers created special styles for them and its songwriters wrote special songs to spur them…. War-period conditions, they planned, were to become a permanent part of the future educational program. The bourgeois family as a social unit was to be made obsolete.” (153)

There was to be no family but the party and the state. Dodd helped organize the Congress of American Women, a forerunner of the feminist movement.

“Since it was supposedly a movement for peace, it attracted many women. But it was really only a renewed offensive to control American women… Like youth and minority groups, they are regarded as a reserve force of the revolution because they are more easily moved by emotional appeals.” (194-195)

When FDR recognized Russia in 1933, he deliberately turned a blind eye to the CPUSA’s massive program of espionage and subversion. Liberals denied that this took place and complained about a “witch hunt.” Guess what? The “loony right” was correct.


A new book (The Secret World of American Communism, based on newly opened Kremlin archives, confirms that CPUSA was a puppet of Moscow and the Roosevelt and Truman administrations were practically run by Soviet agents, Alger Hiss, Harry Hopkins and Harry Dexter White to name a few.

The war years saw the CPUSA actually renounce the class struggle and join the so-called “Roosevelt camp of progress” which included “progressive capitalists.”

“The Communist Party now assumed the responsibility of establishing a rigid discipline over the working class. No employer was more effective or more relentless in checking strikes among the workers, or minimizing complaints…while wages rose a little during those years, they did not compare with the rise in profits and in monopoly control of basic necessities…war production was chiefly in the hands of ten large corporations…the Communists carefully muted such information.” (153)

The war years saw amazing coordination between the Communist Party and America’s financial elite. The elite financed a sophisticated propaganda agency called the Russian Institute located on Park Ave. across 68th Street from Rockefeller’s Council on Foreign Relations. Here “famous names like Vanderbilt, Lamont, Whitney and Morgan mingled with those of Communist leaders. “(153)

At Roosevelt’s insistence, Stalin “dissolved” the Comintern in order to make the CPUSA look like an American party. The CPUSA leader Earl Browder achieved national prominence and consulted with senior Roosevelt cabinet ministers.

The joint US-Russian war effort was to be the basis of the new world order. But, inexplicably, the policy changed and Browder instantly became a non-person. Apparently the financial elite had decided the time wasn’t right for world government. A cold war would be much more lucrative. Dodd was told that in the future, the party would often find itself opposed not only to the government, but also to U.S. workers.

“I now saw that with the best motives and a desire to serve the working people… I and thousands like me, had been led to a betrayal of these very people…. I had been on the side of those who sought the destruction of my own country.” (229)

Like frightened mice, the CPUSA membership scurried to adopt the new party line. Dodd tried to quit but was told: “No one gets out of the party. You die or you are thrown out.” (197)

Eventually Dodd was expelled and smeared as “anti-Negro, anti-Puerto Rican, anti-Semitic, anti-labor and a defender of the landlord.” (220). Sound familiar? After more than 20 year of tireless sacrifice, she was without family or friends. The party had been her family. Its “hates had become my hates.”

Bella Dodd was circumspect about the people behind the Communist Party. She once was told to phone two multi-millionaires who live in the Waldorf Towers if she lost contact with Moscow. Elsewhere, she refers to “a secret well organized world power.” She is obviously afraid to be candid. She suspects that one CPUSA leader’s “suicide” was in fact murder. (172)

But she does drop a possible clue. She says that each of the nine floors of the party-owned headquarters at 35 E. 12th St. was devoted to CPUSA business. The Sixth Floor held “the publication offices of the Yiddish newspaper, the Freiheit, and the “Jewish Commission.” (162) Indeed Jews were prominent among Communist dupes.

“What now became clear to me was the collusion of these two forces: the Communists with their timetable for world control, and certain mercenary forces in the free world bent on making profits from blood.” (229)

As “one piece of the puzzle that finally became a picture,” Dodd tells the story of the ship “Erica Reed” typical of “hundreds of other stories.” During the Spanish Civil War, Americans donated money to load the ship with medical supplies and food for Spain. The Communists diverted the ship to Russia instead. (89)

Censorship is crucial to Communists, Dodd says. “I have often seen leaders pull books from shelves in homes and warn members to destroy them.”(223)

Communism is essentially a deceitful system of international elite control. It was not suppressed during the McCarthy era. Rather it morphed into the New Left, Counter Culture, Civil Rights, Anti War and Woman’s Liberation Movements, and later into a plethora of elite-sponsored NGO’s, and media, Democratic and Republican party factions, Liberal, Zionist, Labor, and Gay Rights groups. Like the CPUSA itself, these groups are controlled from the top so their memberships are unaware of being used.

To the objection that some of the above mentioned groups oppose globalization, Dodd refers to examples where the CPUSA ostensibly supported causes they wished to sabotage. (205)

Communism was/is a plot designed to substitute a cabal of the rich for the rule of God. It is a utopian fraud hatched by the rich to thwart the dreams of ordinary people and stunt human progress. The same cabal is behind most wars including the impending attack on Iraq.

A precursor to the new world order, Communism espouses brotherhood, peace and equality in order to deceive us. It has taken over society’s eyes, ears, mind and spirit. Much of what passes for truth in the media and schools is part of this monstrous con job. The expression “politically correct” in widespread use in America is an old Communist Party term. Our politicians are mostly traitors.

Feminism is Communist both in origin and spirit. It pretends to champion women but in fact neuters both sexes and destroys the basic social unit, the family. The promotion of homosexuality as a “lifestyle choice” for heterosexuals is also part of this brazen elitist fraud designed to “create new types of human beings who would conform…”

Western Civilization is like a ship floundering in a sea of evil, yet the passengers are too duped and distracted to realize it. Bella Dodd had the courage to sound the alarm 50 years ago. It is never too late to begin to resist tyranny.

There are no lifeboats.