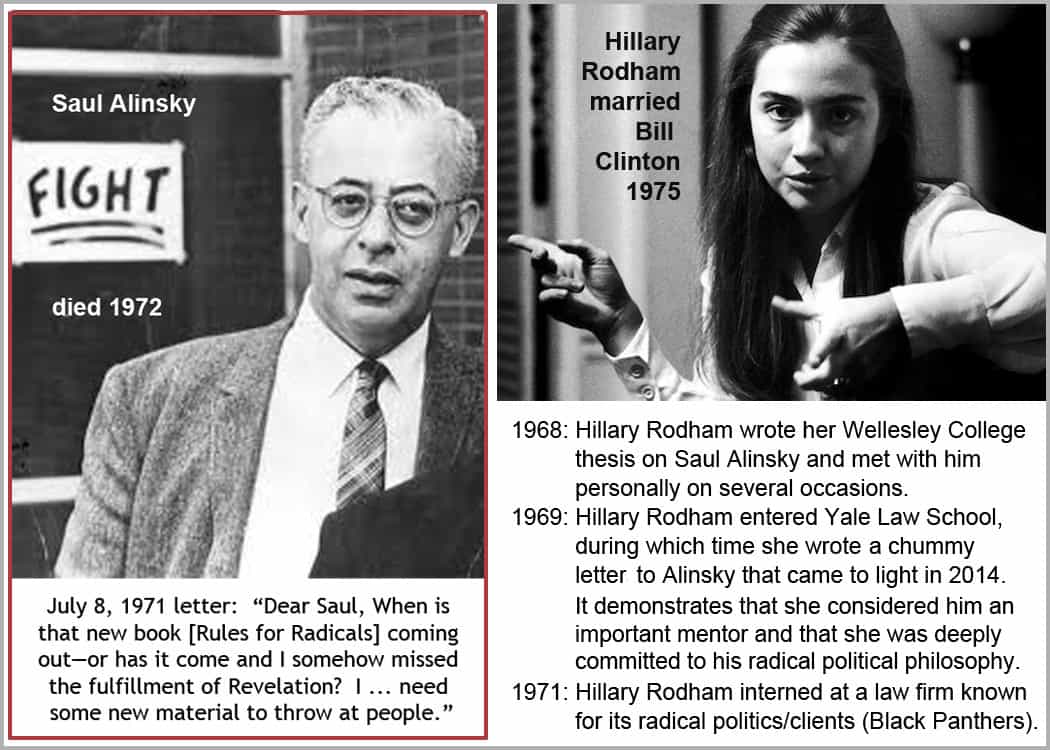 (above, Both Obama and Hillary Clinton were disciples of the Communist Saul Alinsky)

One of Saul Alinsky’s rules for subverting
and conquering a target nation was to
“freeze it, personalize it and polarize it.”

“If you read some of the left-leaning writings of people like Saul Alinksy, you understand exactly what they’re doing. This is part of the plan,” former presidential candidate Ben Carson said.”  Carson doesn’t realize that his man Trump is also part of this plan.

by Henry Makow Ph.D
Long ago, Communists realized that the best way to take over America was to do it but not tell anyone: Take control of its vital institutions but keep up the appearance of freedom and democracy. As time passes, this mask is gradually slipping and the horrific visage of the NWO is appearing. 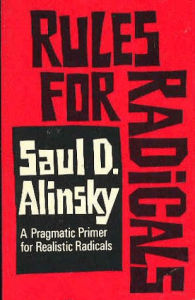 For now, there is the appearance of “choice” between Clinton and Trump.  Hillary Clinton’s mentor was the Communist Jewish agent Saul Alinsky (1909-1972). Barack Obama was a “community organizer.” Alinsky coined the term.
Communism is monopoly capitalism administered by the government. It seeks to extend this monopoly power to every aspect of human life. Based on Cabalist Judaism and Freemasonry, this satanic force wants your family, your freedom and your property. It wants to ground you into dog food like the millions who were killed and maimed in all their contrived wars. Trump, Sanders and Clinton all belong to this satanic cult, the Illuminati. They are playing their respective roles by polarizing and paralyzing the country.
In 1971, Alinsky published his “Rules for Radicals” which schooled his fellow agents on how to subvert society while appearing to champion the poor.
One of Alinsky’s “rules for radicals” was:   “Pick the target, freeze it, personalize it, and polarize it.”  The target is the  United States.  This is  happening now. The country is descending into vicious and potentially violent civil strife with Donald Trump on the “Right” and Clinton/Sanders on the “Left.”  Hasn’t the US government been “frozen” in gridlock for long enough?
We are not supposed to notice that Trump, Sanders and Clinton are all Freemasons and Satanists. This way we won’t recognize that the real enemy is the Masonic Jewish banking cartel that creates the medium of exchange –currency and credit — in the form of a debt to itself. (The government could do this debt and interest free.) As I said, it wishes to extend this monopoly to include your wife, your children, your property and your soul. For example, it is already possessing your wife and children by converting them to homosexuality (feminism) as though it were normal and healthy. 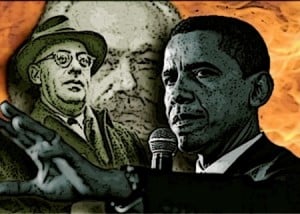 As I said, Saul Alinsky’s Rules for Radicals was Barack Obama and Hillary Clinton’s Bible.  Just so there is no ambiguity, Alinsky dedicated this book to Lucifer, “the very first radical…who rebelled against the establishment and did it so effectively that he at least won his own kingdom–Lucifer.”
The true nature of “revolutionary, radical and progressive” is Satanism. The goal of Satanism is to turn reality upside down so that the Cabalist banker will replace God at the top. Evil becomes good, falsehood becomes truth, sick is healthy, unnatural is natural and vice versa. Western society is satanically possessed. Almost every position of influence is held by a member of this cult which promotes endless war and social and personal dysfunction. That’s how they get away with crimes like the JFK assassination and 9-11.
Masonic Jewish media control is such they can conjure up any political scenario and put it over on the unsuspecting public. Society suffers from cognitive dissonance. It is unable to address the real issue – that almost all our major politicians are Freemasons.   They are the actors, collaborators and traitors. Elections are a reality show.  Trump’s role is to get Clinton elected.   He will do this by splitting the GOP in the same way that Theodore Roosevelt got Woodrow Wilson elected in 1912. 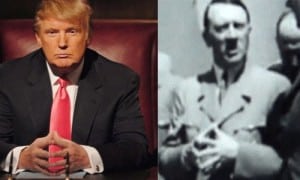 Trump’s role is to discredit and disillusion his followers in the same way Hitler did in World War Two. Do you really think this billionaire is going to tame the one percent? He is one of them. His job is to “freeze, personalize and polarize.” Even if he were sincere, there is no way he could actually win with all the media aligned against him.
The Cabalist banker  goal is total control – to enslave humanity. That’s why they need mass surveillance. They going to turn up the heat. Frogs are going to start jumping out of the pot.
I hope I am wrong. But whether or not I am, we need to resist “polarization” and address the cancer that has paralyzed society — Satanism (Cabalism, Communism, Freemasonry.)
————-
Related– “The Aim of Freemasonry is the Triumph of Communism”
—
First Comment from Glen:
Thanks Henry for writing what needed to be written. For anyone who knows what communism(Satanism)is all about, it is more than clear America has been heading down this path since her very beginning. Over the past few years, the throttle on the commie train has been mashed to the floor. It is now full speed ahead, for the rulers of us all have their eye on the prize and are driving hard for their one world oligarchy.
This game of right v left has been played for a very, very long time and no one ever seems to be the wiser. People cannot admit that no matter who is in office, nothing ever changes. Was it not  Carroll Quigley who wrote in his instruction manual for world government “Tragedy and Hope” that “The argument that the two parties should represent opposed ideals and policies, one, perhaps, of the Right and the other of the Left, is a foolish idea acceptable only to doctrinaire and academic thinkers. Instead, the two parties should be almost identical, so that the American people can ‘throw the rascals out’ at any election without leading to any profound or extensive shifts in policy”
To know what a candidate is all about, all you have to know is who he(or she)surrounds themselves with. Count how many of their advisers are Council On Foreign Relations members. A true Nationalist would have nothing to do with anyone tied to this organization. We will return again to Quigley who tells us exactly what the CFR’s purpose is: “The Council on Foreign Relations is the American branch of a society which originated in England [and] believes national boundaries should be obliterated and one-world rule established.”
It was also Carroll who spelled out for us what the REAL controller’s of us all have had in mind all along.  “The powers of financial capitalism had another far-reaching aim, nothing less than to create a world system of financial control in private hands able to dominate the political system of each country and the economy of the world as a whole. This system was to be controlled in a feudalist fashion by the central banks of the world acting in concert, by secret agreements arrived at in frequent private meetings and conferences.”
Time to wake up folks, If your candidate has ANY ties with the CFR he is a globalist and will push ahead with the NWO goal, no matter what he says. If we had true opposition we would be no where near where we are now. It’s all a game and we are being played. It is far past time to quit believing in “Easter Bunny” candidates who will save us all.  You want change, you had better start attending city council meetings and state legislations and voicing your opinion yourself. You will have to save this country, because no one else will.