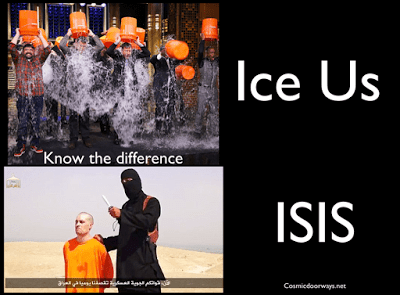 Birth of a New Earth
Friends, this is a very important video describing how the Illuminati use the media and the power of alphabet/sigil languages to cast spells. In this video, you will learn that during the winter of 2013, Americans were bombarded with information about Edward “SNOWDEN” — as a way of getting us to repeat over and over again the language of being SNOWED IN. Hence, we had one of the most severe winters on record, with maximum levels of snowfall in various parts of the nation.

Now, with their new ritual programming, they are attempting to leverage our energy once again, by getting us to participate in the creation of another severe winter, this time with serious levels of flooding or hail or tsunamis or tidal waves — perhaps being directed at New York. And the way they are getting us to help them create that future is through this absurd “Ice Bucket Ritual” — that so many billionaires have taken the time to model for us on TV.

It isn’t everyday you see billionaires taking time out of their busy looting schedules to demonstrate the absurd. Yet here they are all, one after the other, modeling this sick satanic ritual in order to get us to do it too — and thereby lend our energy toward their destructive creations.

Beware of their upcoming weather warfare plans. Please pass this video on to as many people as possible so that millions of awakened souls will be using their energy to COUNTERACT the evil plans of the dark forces instead of contributing to them.

AND WILL YOU LOOK AT THIS!!! JUST ONE DAY AFTER I POSTED THIS BLOG, THIS VIDEO TURNED UP ON FACEBOOK….

ANOTHER INTERESTING TWIST — THIS ONE SHOWING UP JUST TWO DAYS AFTER I POSTED THIS BLOG… CO-FOUNDER OF ALS ICE BUCKET CHALLENGE DROWNS!!!!!

Source Article:
Co-founder of “ALS Ice Bucket Challenge” drowns at age 27
Corey Griffin died over the weekend off the coast of Massachusetts
http://www.salon.com/2014/08/20/co_founder_of_als_ice_bucket_challenge_drowns_at_age_27/?utm_source=facebook&utm_medium=socialflow

Philanthropist Corey Griffin died on Aug. 16 at the age of 27. Griffin helped co-found the viral “ALS Ice Bucket Challenge,” which has swept across the world this summer. The young man began actively raising money to fight amyotrophic lateral sclerosis, also known as Lou Gehrig’s disease, after his friend Pete Frates was diagnosed, the Boston Globe reported.

“Helping out was nothing new for Griff,” Frates wrote on Facebook, the Independent reported. “He held his own event for me back in 2012, just a few months after diagnosis. He worked his butt off these last few weeks for ALS. We texted everyday, planning and scheming ways to raise funds and plan events.”

Griffin drowned off the coast of Nantucket, Massachusetts, in a diving accident. At 2:00 a.m. he dove from the top of Juice Guys — a popular diving spot for locals, located on the Straight Wharf. He apparently surfaced once, but was then pulled under by the waves.

Earlier that night, the Independent stated, the 27-year-old helped raised $100,000 at a fundraiser for ALS.
advertisement

“He had an uncommon maturity about himself and understanding the responsibility of philanthropy,” Bryan Koop, a senior vice president-regional manager of Boston Properties, told the Boston Globe. “A lot of people in life watch the world spin by. He was someone who was making the world spin. This boy was really special.”

The “ALS Ice Bucket Challenge” has been taken by Bill Gates, Jimmy Fallon, George W. Bush, Mark Zuckerberg and many other celebrities and politicians. According to the Independent, it has raised $22.9 million for ALS aid.

ANOTHER UPDATE FROM 8-21-14 — THE CONNECTION TO “SPARKS”/Electrocution

I know this is most bizarre, but…. this video showed up on my facebook today regarding a ritual connection between the Ice Bucket Challenge and sparks. Just a few hours later, a story appears that firefighters helping with the Ice Challenge were electrocuted. The latter story was reported by “Wave 3 News.” Coincidence? I don’t think so. The whole world is a stage. They are acting out their sadistic rituals all the time!

CAMPBELLSVILLE, KY (WAVE) – Four firefighters with the Campbellsville Fire Department were shocked — one of them critically — while helping the Campbellsville University marching band with an ALS ice bucket challenge, according to a spokesman for Supporting Heroes, an organization that provides support to family members after emergency responders are injured or killed in the line of duty.

Eric Johnson said two of the injured firefighters are being treated at and will be released from a Campbellsville hospital today. The other two firefighters were transported to University of Louisville Hospital. One of them is in critical condition. The other is in fair condition, Johnson said.

The incident happened around 11:45 a.m. Aug. 21 near Chandler Avenue and Spring Street, right outside the university’s football and baseball facilities.

Sources say the incident happened when the fire truck’s aerial basket touched power lines. Power went out across a wide portion of the Campbellsville area, affecting about 4,500 customers. A spokeswoman for LG&E-KU said the utility company took a transmission line out of service after being notified of the incident involving the line. Power has since been restored in the area.

“The band students were moving away from the truck and the area,” CU band director Jennifer Tinnell told WCKQ 104.1 FM, “and I was standing at the fire truck thanking the [firefighters] for helping us out in this. Out of nowhere, we heard a huge explosion, and at the same time saw sparks coming from the rear of the fire truck and just a lot of electricity that shot straight up to the bucket ladder.”

Tinnell said several firefighters were in the bucket at the time.

“A short amount of time after that, there was another strike of it, and everything was stopped and called in for rescue and help at that point,” Tinnell added.

Via Twitter, Campbellsville University said no students were injured in the incident. A prayer service has been scheduled for 7 p.m. on Stapp Lawn.

“We express heartfelt sympathy and prayers for the families of the two firefighters who were injured,” said CU President Dr. Michael V. Carter in a statement posted on the university’s website.

CU is a private, Christian, liberal arts school in Campbellsville, about 85 miles south of Louisville.

The Ice Bucket Challenge is a social media movement that has raised awareness and millions of dollars for ALS research.

Officials have scheduled a press conference for 5 p.m. EDT at the Campbellsville-Taylor County Fire Department, and it will be streamed live on WAVE3.com.

“…Anyone who has doused themselves with ice cold water has willingly purified and marked themselves for the mega blood ritual sacrifice that is part of their coming ritual future… Millions and million of people have fallen for the deception and doused themselves with ice water and in doing so, have willing baptized themselves, purified themselves ritually, for ritual sacrifice that is yet to come… Now that they’re into the mass mind control aspects of it, they’re gearing up for something big… If you took the shower of ice, you need to figure out what the hell you’re gonna do to get out from under it. Because you need to willingly back out from the embrace of evil that you’ve taken upon yourself…”

“…Sayer points out the link between statins and ALS and reveals ALS Association corporate sponsors include drug companies that manufacture them, not unlike the pharmaceutical industry’s creation of Breast Cancer Awareness Month and all the nauseating pinkwashing that ensued. The head ALS Association executive makes over $300,000 a year — calling into question whether it is a charity or a business organization…”

“We pulled up their 2013 tax returns to take a closer look at how their funds are spent. Here are the salaries for the leadership of the group:

Total administration costs, as seen in the pie chart above, were just under $2 million. “Other salaries and wages” (Part IX line 7) were $3.6 million, with another half million dollars in “pension plans” and “employee benefits.” Expenses for non-employee labor were about $4 million, and “travel expenses” exceeded $1.3 million.

So total costs for labor to run the association was around $12.5 million, from revenues received totaling $24 million.

Over 50% of what the ALS Association receives appears to support salaries of people working for the Association, based on these tax returns.

So what about the rest of the revenue?

Almost $1 million was spent on “Lobbying” (Schedule C Part II 2a). Here is what they wrote concerning their Lobbying efforts:

Explanation: The purpose of our advocacy program is to sensitize legislators to, and obtain their sympathy for, the plight of ALS victims, patients and their families, and to influence legislation regarding the appropriation of federal funds for ALS research and the use and cost to patients of “orphan” drugs.

The largest amount of what is remaining is: “Grants and other assistance to governments and organizations in the United States” (Part IX line 1) – $6.2 million. This amount is itemized on Schedule 1. Almost all of these recipients are medical schools, with strong ties to the pharmaceutical industry.

The ALS Association was started in 1985, and they still have not invested in any new cures for ALS. One of the latest failures was Biogen’s drug dexpramipexole, which halted research in early 2013. The drug was in research for more than 10 years at an estimated cost of between $75 million and $100 million, but was abandoned in last stage development due to poor results. (Source.)

If You Are Pro-life, You Are Supporting Research in Stem-Cells from Aborted Fetuses for ALS

The ALS Foundation’s primary work in “research” is in the development of new pharmaceutical drugs, and that includes stem cell research. Here is one study where they have been listed as a sponsor: A Phase I, Open-label, First-in-human Feasibility and Safety Study of Human Spinal Cord derived Neural Stem Cell Transplantation for the Treatment of Amyotrophic Lateral Sclerosis. Quote:

These stem cells have been engineered from the spinal cord of a single fetus electively aborted after eight weeks of gestation. The tissue was obtained with the mother’s consent.

When we make a contribution to a charity, typically we want to know that the particular charity reflects our own values, so this will be important information for many people…”
ALS Ice Bucket Challenge: Do You Know What You Are Supporting?
http://healthimpactnews.com/2014/als-ice-bucket-challenge-do-you-know-what-you-are-supporting/

“…“Recent experiments funded by the ALS Association, mice had holes drilled into their skulls, were inflicted with crippling illnesses, and were forced to run on an inclined treadmill until they collapsed from exhaustion. Monkeys had chemicals injected into their brains and backs and were later killed and dissected…”
Pamela Anderson refuses ice bucket challenge: ‘I won’t fund an organisation that drills holes into live mice’
http://www.closeronline.co.uk/2014/08/pamela-anderson-refuses-ice-bucket-challenge-i-won-t-fund-an-organisation-that-drills-holes-into-live-mice#.U_rDGtzcCo1