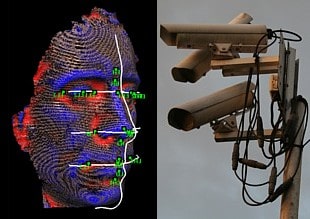 Under the pretext of “fighting terrorism” the British government has allowed the unthinkable to happen, as police have somehow managed to acquire and then upload what equates to approximately 33% of the UK population – 18 million ‘mug shots’ – into a nationwide, real-time facial recognition tracking system.

To describe what has happened to British society, one can no longer call it a “slippery slope”, as it’s abundantly clear from this latest news that Britain has already fallen off the edge, and is presently tumbling into a Orwellian canyon.

As 21WIRE revealed this week, facial recognition is only the beginning, as US authorities begin rolling out the TSA’s new “emotional recognition” surveillance technology systems nationwide – and soon to be implemented worldwide. In addition to this, in September 2014, the FBI announced its new billion-dollar Next Generation Identification (NGI) program is ‘fully operational’. This new biometric system is a replacement for the FBI’s previous Integrated Automated Fingerprint Identification System (IAFIS). The real-time system has the ability to becontinually scanning for images of Americans 24 hours per day. In fact, the FBI has been suedby the Electronic Frontier Foundation (EFF) over access to its secret biometrics database, with EFF arguing that the US government refuses to comply with Freedom of Information Act (FIOA) requests, and is vacuuming up this data with absolutely no oversight at all.  The lawsuit also revealed how the FBI is deploying drones in the US for surveillance purposes.

No one in the media has asked exactly where the UK police have acquired 18 million facial mug-shots that have already been cross-referenced with a valid ID. It’s obvious that the easiest available tranche for lifting that many photos and match ID is from the British airports and ports of entry, like Heathrow, Gatwick, Stanstead, Manchester, Birmingham and Glasgow Airports. If this is the case, then legally, should all travelers in and out of the UK be notified that they will be tracked by British police while inside the country (we sincerely hope that both mainstream media and civil rights advocates will do their jobs and follow-up on that question).

UK technocrats and civil servants who remain enamored with sophisticated computer technology are calling this latest revolution in facial recognition technology “cost-effective”, but in relation to what? Shouldn’t the real measure of any system’s true worth be whether or not it is productive, and who will define productivity? Is productivity based on how many ‘suspects’ are rounded-up and incarcerated, or is it based on how many actual criminals are apprehended?

Alastair MacGregor QC (quoted below) also adds here, “I think there is always a danger that if you can do something then you will do it, the technology takes over… without giving the attention to the other issues that arise in relation to it as one should.”

Far from tracking criminals, the new system may eventually be used to track and monitor individuals who hold what authorities consider to be “anti-government views”. This could range from anyone engaged in a lawsuit against the police or government, to anti-fracking activists, anti-big pharma, anti-GMO, anti-vaccine, parents who home-school their children, or evenjournalists who hold opinions that differ from the government’s official party line.

Common sense and history dictates that once a system such as this is in place – no matter how many assurances central government Mandarins might give to symposium panels and media – there is absolutely nothing that can really prevent a centralized police apparatus from both over-using and misusing these power Big Data capabilities. It’s inevidible, and British police have said as much, with UK Chief Constable Mike Barton, of the Association of Chief Police Officers, boasting, “Everybody is very keen that the police enter the cyber world.”

“I hear much criticism of policing that we’re not up to speed and it does come as a surprise to me that we’re now being admonished for being ahead of the game.”

Ahead of the game? Which game is that?

Are these dark days for the UK? Police forces in England and Wales have uploaded up to 18 million “mugshots” to a facial recognition database – despite a court ruling it could be unlawful.

They include photos of people never charged, or others cleared of an offence, and were uploaded without Home Office approval, Newsnight has learned.

Photos of “hundreds of thousands” of innocent people may be on the database, an independent commissioner said. The database complies with the Data Protection Act, police insisted.

Biometrics Commissioner Alastair MacGregor QC said he was concerned about the implications of the system for privacy and civil liberties. Speaking in his first interview, he told Newsnight that police forces had begun setting up a searchable database of police mugshots last year, without telling either him or the Home Office.

Almost every police force in England and Wales had now supplied photographs, he said.

It comes despite a ruling in 2012, when two people went to the High Court to force the Metropolitan Police to delete their photos from databases.

The judge warned forces should revise their policies in “months, not years”.

Met Police Commissioner Sir Bernard Hogan-Howe told the BBC that since the court case, his force had stopped putting images on the national database until the law had been clarified.

“So the broad concern is – are we keeping images of people who aren’t convicted, and are we using them?” he said. “I don’t think this is against the law but of course we always want to catch criminals.”

He added that he would look into the matter.

Mr MacGregor said police had been warned to put rules in place regarding the use of police mugshots – but had not done so.

He said he recognised the potential value of the database to the police, but warned senior officers had rushed in without considering all the implications.

Continue this story at BBC