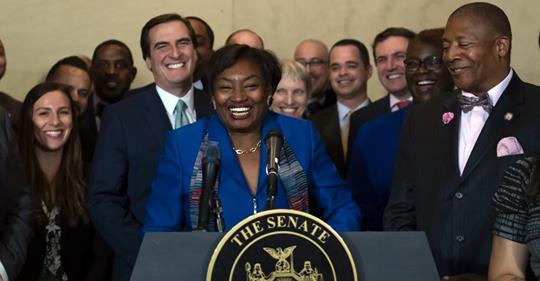 Apparently the right to LIVE is no longer fundamental. On Jan 22, the 46th anniversary of Roe vs Wade, the New York Senate passed a radical pro-abortion bill that would allow unborn babies to be aborted up to birth. Upon signing the bill, democrats, proudly posed for a photo op (above) –  “With smiles on their faces like witches straight out of the Wizard of Oz. They don’t think that judgement is at the doorstep. They truly don’t,” said Facebook blogger Sarah Grant

Make no mistake, it is.

The news has left the country reeling. Here are few Facebook comments:

Butch Rotherham People aborting children and would riot and protest ?to protect puppies left out on a cold night.

Kelli Sloan Speechless. And cannot even believe our country has sunk to this level.

Amy Buchanan It passed yesterday and they are proud of it. Good is evil and evil is good and pride comes before the fall.

Linda Browning This is just has to be fake news nothing this sickening can be true can it???

The darkness and rain seem appropriate in Nashville today.

Only 4 days earlier, literally hundreds of thousands of Pro-Lifers marched for life and mourned 60 million abortions.

According to March for Life President Jeanne Mancini, this was the largest human rights demonstration in the world. Did you see it covered on the news? Doesn’t a march of hundreds of thousands of American citizens seem news worthy to you?

LifeNews The New York Senate passed a radical pro-abortion bill Tuesday that would allow unborn babies to be aborted for basically any reason up to birth.

Metro reports the bill passed after abortion activists pushed it for more than a decade in New York. Until now, it failed to pass the state Senate because of Republican lawmakers, but the November election put pro-abortion Democrats in control of both houses.

A New York Public Radio reporter said she heard a voice shout, “May almighty God have mercy on this state!” in the Senate soon after the vote.

The legislation goes beyond Roe v. Wade, allowing abortions even when the Supreme Court has said states may regulate them, according to the pro-life leaders. Late-term abortions, which currently are illegal in New York, would be allowed, and non-doctors would be allowed to perform them.

The bill appears to restrict late-term abortions, but it adds a broad “health” exception for abortions after 24 weeks. The exception would allow women to abort unborn babies up to nine months of pregnancy for “age, economic, social and emotional factors, rather than the biological definition of ‘health’ that normally comes to mind,” according to New York Right to Life.

State Senate Majority Leader Andrea Stewart-Cousins celebrated the legislation at a press conference Tuesday, according to the Metro. She claimed the so-called right to abortion is threatened by the new conservative U.S. Supreme Court.

Pro-abortion Gov. Andrew Cuomo also supports the bill. He even went so far as to threaten to hold up the budget until the legislature passes it.

The bill, dubbed the Reproductive Health Act, redefines a “person” as “a human being who has been born and is alive,” and describes abortion as a “fundamental right.” This language will allow unborn babies to be aborted for basically any reason up to birth in New York.

The legislation poses serious dangers to women’s lives and rights as well. By removing protections from illegal abortions, the bill will open the door for abuses. According to New York RTL, back alley abortionists, abusive partners or parents and others no longer would face charges for illegally killing an unborn baby – even if the mother wanted her child.

“In early December, a resident of Saratoga County was arrested for punching the stomach of a woman who was 26 weeks pregnant in an attempt to cause a miscarriage. The man was charged with abortion in the second degree, but under the RHA, the attacker would not have been charged with a felony,” according to the Catholic News Service.

Protections for babies born alive after botched abortions also would end under the new bill. Additionally, the bill says the state cannot “deny, regulate or restrict” abortion, not even for common-sense reasons such as parental consent for minors, informed consent or limits on taxpayer-funded abortions.