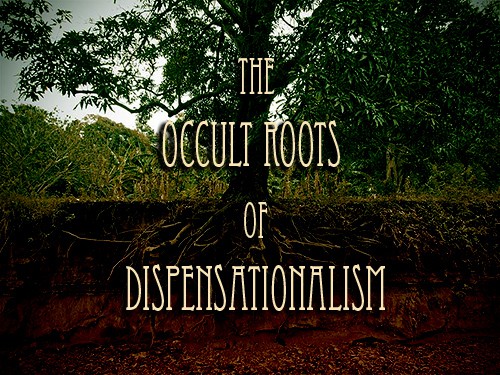 So many deceptions seem to lead back to the nineteenth century, a time that saw a great rise in occult spiritualism. I briefly covered Dispensationalism in my video “Chemtrails: A Christian Perspective.”

This study shows that dispensationalism is not merely a different interpretation of prophecy, but that it was deliberately sown into the church with an agenda.

In this series the term “Dispensationalism” refers to the theological system invented in the 1830’s by Plymouth Brethren founder, John Nelson Darby (Nov. 18, 1800 — April 29, 1882). While there may be controversy over whether he was the first person to conceive of the pre-tribulation rapture and two distinct peoples of God doctrines, it is certain he played a huge role in systematizing and promoting dispensational theology. His doctrines are found in C. I. Scofield’s Old Scofield Study Bible—copyright 1909 and 1917 and are the foundation for other dispensational works.

This series of charts and articles is published to make you aware that J.N. Darby marked his bible translation, The Holy Scriptures: A New Translation from the Original Languages by J. N. Darby, and his theological writings with Theosophical/occult vocabulary and doctrines.

John Nelson Darby Waited For “the Coming One”

John Darby’s Pre-Tribulation Rapture Alterations to the Bible (John Darby inserted the message of imminence into many prophetic verses of scripture.)

John Nelson Darby’s Version: Based on Corrupt Texts (John Darby was a Forerunner of the Modern Bible Versions Movement.)

John Darby Version: Doctrinal Changes to the Bible (In view of John Darby’s departure from historic Christian beliefs, let us examine his bible.)

Scofield: “in the midst of” Vs Jesus Christ: “within you”

Theosophists Look for the “Consummation of the Age”

Darby/Scofield’s”coming in flesh” Christ is Antichrist

John Darby’s Version of Christ rose from “among the dead”

John Darby Version Removed “Damned” and “Damnation”  (Cyrus Scofield (via his marginal notes) replaced “damnation” with words found in the critical Greek Text–such as judgment.  (J.N. Darby and Cyrus Scofield replaced hell (place of fire and torment) with “hades” which means the place of the dead.)

John Darby Version on Revelation and the Second Coming of Christ

John Darby and Cyrus Scofield on the “Day of Christ”