Now, I know that heaven is a very real place.If any one of those two dimensions be an illusion it would be planet earth and all creation. Not to sound too much like a Christian Science follower, who believe we can control our own reality here on earth. The fact is we can’t, other than through prayer and by the will of God.  Jesus is the One who controls reality for He created it all.

There is a veil that now exists between heaven and earth, we know why, it goes back to the Garden of Eden when Adam chose to believe Satan’s lies and not Gods truth.  Adam and Eve had direct access to God daily, maybe even access into heaven although the Bible does not mention it to my knowledge.

But what about now, can we get glimpses of heaven, maybe even a glimpse through a dream or vision of our loved ones who are there now, and maybe even what they are doing?  I can tell you one thing, they are not sitting on clouds playing with harps!

They are very busy for sure, there is much activity going on, there are plans in the making and plans that have already been made from before the beginning of time itself.  Are those saints in heaven training for a battle that is soon to come? Do you think all those saints who have preceded us are aware of this soon coming battle on earth? 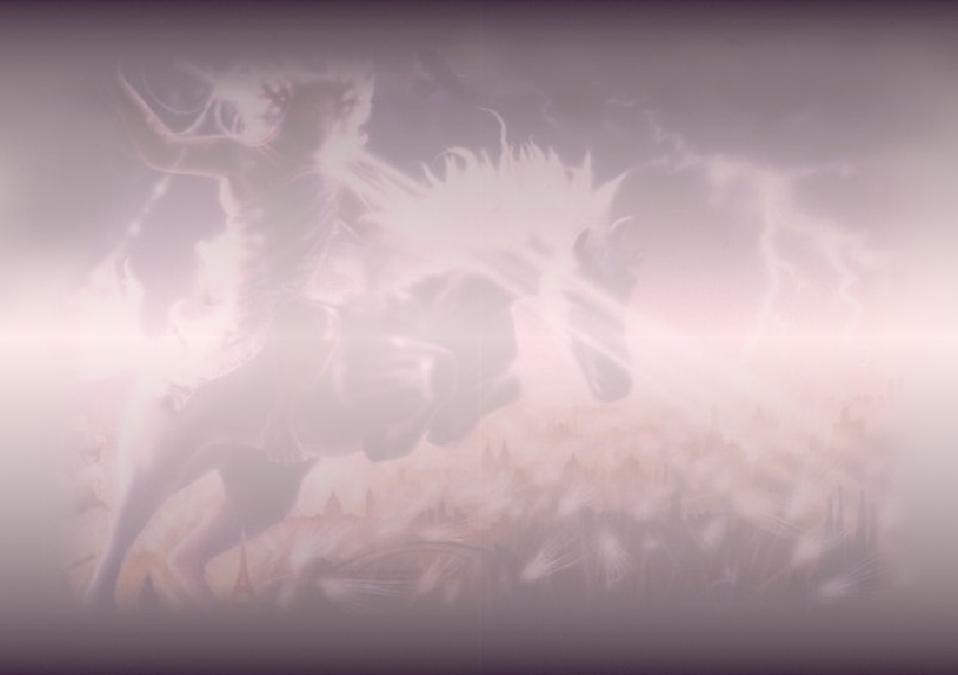 Robin, a few weeks ago had her first vision in a dream of our son Colton, who home went to be with the Lord in January of this year. Before that nothing at all, if some of you read her last up date this is what she said:

“People have asked me if I talk to Colton or feel his presence. No, not really. I do catch myself sucking in breath when reaching for a package of pasta and unexpectedly feel the long thin strands of Colton’s favorite, Capellini. Or, see ducklings. Soft, wobbly, peeping. A white stone. A cyclist pedaling uphill. A flannel. That’s when my heart fractures, “O, my Love.”  As my loss, my missing-him is the most sorrow-full piece of the way. But, I know Colton is living the real reality in heaven in the presence of Jesus.  And, God has placed plenty of hope-markers along my grief-walk. Assuring me.”

Robin, in her dream that night Colton came to her, he was younger, or that is how she perceived him. And, maybe that is how Colton wanted his mommy to see him. I know, even where Colton is, he misses his mom! I know Jack misses Gayle and Kari very much too!  They so much long for and miss the fellowship of the loved ones they left behind!

Robin spoke with Colton and got to embrace him. They talked and Robin does not really remember of what, she was just happy to see him. She awoke and tried to hang on to the encounter, but like many dreams that seem so real is that this reality brings us back here.

Later Robin was telling her sister Carrie,  her only sibling, who is 16 months younger than Robin, about her dream with Colton. All of a sudden there was a silence from the other end of the phone. Robin asked Carrie what was going on? Carrie said she just had a vision that Colton was in heaven and one of the things he was doing was training with combat swords.  That is just what she said she saw, but to her that vision was very real !

My friend Yvonne, who had a heaven experience when she had brain tumor surgery told me the first thing she thought about there was everyone back here on earth. She was very aware of what was happening back on earth while an Angel flew her on his wings around heaven. You can get her testimony on this site. 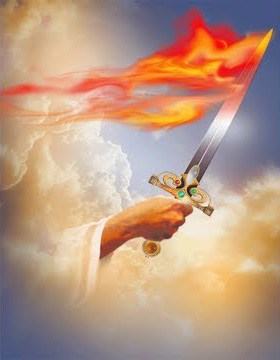 Same with Colton Burpo, the little boy who went to heaven and came back about what he saw in heaven about swords. Here is a quote of what Colton said about if there are swords in heaven. “

“All the things Colton Burbo shared with us were spontaneous discussions. He’d just start volunteering information. The conversation about Satan came up because his mom was talking about swords. She said, “I bet there aren’t any swords in heaven,” and he stopped what he was doing and said, “There are too swords in heaven. The angels have them to keep the devil out of heaven.” Events would happen that would jog his memory. He shared what he wanted to share.”

The odd thing also is Scotlyn gave Robin a sword for her last birthday, just for fun. It is a little shorter than a Roman Centurions sword. Hal Lindsey in his study on Revelation talks about the Roman sword being called a makhaira. Here is something I found on a Roman Sword on Youtube and also the one Scotlyn gave Robin.  Both Hal and Robin like swords, must be the Apache and Comanche in them, LOL.

Scotlyn is doing her training here on earth with horsemanship. She is getting very good at handling horses.  Maybe she will be the rider of the horse and Colton will be on back with his Roman sword, LOL.

Scotlyn has been training on one horse named Apache, he is of all things a white Arab. (Scotlyn also rides English, here are pictures of her jumping.  I know, not the Steeplechase, but it’s a start, Well we will keep her out of that! That is how Christoper Reeves broke his neck! ) 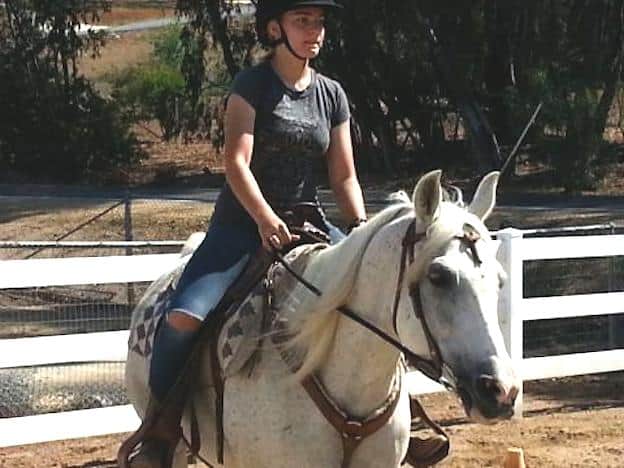 The Bible tells us that Jesus will be on white horse when he returns, with all us behind Him, on white horses. With sword in hand?  I think so! Not like we will need anything else!

The most recent time I had a so-called “vision” regarding this heaven and earth realm, was when I had taken apicture of four life-size iron sculptures of horses jumping across the highway on my way to work. (With the sky covered in chemtrails!) 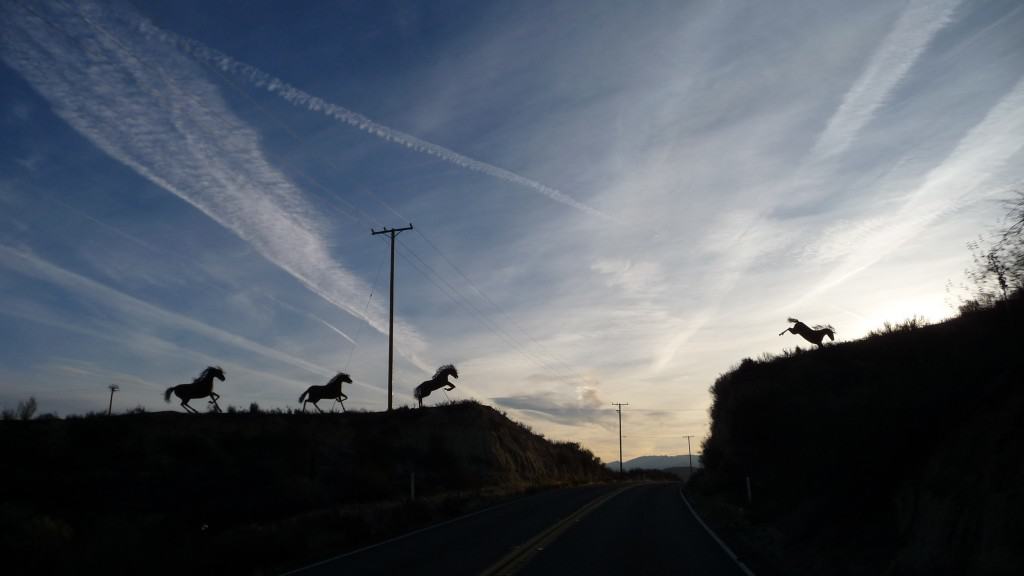 I got home and looked at the picture and was like, “OOOHHH MY!” What came to my mind was the Book of Revelation and the Four Horsemen. The first horse in my picture, being the anti Christ, has touched down on this side of reality, symbolism coming out of the other dimension and into this one. The first horseman in Revelation appears in verse 6:2

“I looked up and saw a white horse. Its rider carried a bow, and a crown was placed on his head. He rode out to win many battles and gain the victory” (Revelation 6:2).

Are we preparing also for this battle, maybe even unknowingly?  I think we are!

I hope others have something to add, because I believe this is the tip of the iceberg many of us  are seeing.