Mind War is the deliberate, aggressive, convincing of all participants that in a war we will win that war. -General Michael Aquino and Col. Paul E. Vallely “From PSYOP to MindWar: The Psychology of Victory”

2013 (and 2014) is going to be the convergence of many events that have been more or less in a holding pattern. First of all, there exists a hidden and very powerful, Satanic elite that is largely controlling world events. This elite which goes all the way back to Nimrod and the Tower of Babel has changed names many times. Sir Francis Bacon, a Rosicrucian (the forerunner of the Illuminati) planned for America to be the “New Atlantis” and head of the New World Order long before 1776.

The Illuminati was officially formed in 1776 by Adam Weishaupt, the same year America was born. Many of our Founding Fathers, who claimed to be Christians, were actually members of the Illuminati. The architectural symbolism all over Washington D.C. is Illuminati and Freemasonry symbolism. For example, according to the historical legend of Nimrod and his wife Semiramis who built the Tower of Babel and created Babylon, there is a deep meaning behind architectural symbols such as the Washington Monument and the rest of the nation’s capital. Washington D.C. is a mirror city to the Vatican. The Washington Monument is a phallic symbol and the capital is the symbol of a womb. This is repeated in Egypt and many other cultures.

Nimrod married the beautiful Semiramis who was either a prostitute or a madam. Some legends indicate she was both Nimrod’s mother and wife. In a power struggle at Babylon, which was the world’s first one world government, one world economic system and one world religion, Semiramis murdered the powerful Nimrod. It appears Nimrod was far more than an ordinary man, he apparently was a Nephilim. The Nephilim was the hybrid race that were produced when fallen angels (B’nai Elohim) had sexual relations with human women. This act of interspecies breeding, which was forbidden by God, produced a race of supermen who were called the “mighty men of old,” or the Nephilim. Apparently, they were physically giants and had highly advanced knowledge. The Nephilim were responsible for the advanced technology and science that produced the great megalithic structures such as the Egyptian pyramids, the Mayan and Incan ruins, Stonehenge and countless other architectural structures that would be impossible to build even with today’s technology. They are advanced and giant instruments of technology which transmit energy and they are constructed to line up with stars and galaxies and are built in accordance with celestial mathematical equations that modern science has yet to discover. In addition, they seem to indicate direct contact with advanced civilizations from outer space, an idea being considered by a growing body of scientists.

Finally, these Nephilim-built structures were occult and Satanic temples of worship which involved human sacrifice. Nimrod designed the Tower of Babel to allow men to project themselves into the stars in order to become gods and to worship the hosts of heaven, which would have been stars and fallen angels.

In the Biblical account, Lucifer wants to become God and leads a revolution of one third of the angels against the throne of God so that Lucifer can seize God’s throne and become God. When Nimrod, whose DNA was a combination of fallen angel DNA and human DNA, built the Tower of Babel it was to contact and worship these fallen angels.

Throughout the Old Testament we read about the mighty men of old, which refers to the Nephilim. The giant Goliath and his brother were Nelphilim. In the story of Joshua and Caleb fighting all the giants in the land of Canaan, they were actually fighting the Nephilim. The Nephilim founded the Canaanite religion which was adopted by the pagan cultures of the time, and all versions included similar styles of Satanic worship. For example, the ancient Canaanites burned their children alive in the white-hot metallic hands of the god Moloch or Baal. They indulged in the most perverse sexual orgies, Satanic worship, and drug taking.

All of the ancient mystery or occult-based religions began at Babylon. Semiramis murdered her husband Nimrod, and to conceal this murder from the population of Babylon she told them that Nimrod had ascended into the heavens and become the sun-god Ra, who was to be worshipped. However, after Nimrod’s death, Semiramis became pregnant because she was carrying on an illicit affair. To conceal her affair, she told the people that she became supernaturally pregnant (a counterfeit of the Virgin Birth). Semiramis claimed she became pregnant by using a phallic symbol upon herself. This began the countless architectural phallic symbols and womb symbols that have been built around the world, including Cleopatra’s Needle in Manhattan, New York.

This is very difficult for some people to accept because they have been indoctrinated into what is called a “scientific-materialistic” world view. Although, this view is not scientific, it is the perception that has been programmed into the American consciousness through media, education and social engineering and was planned by the Fabian socialists over one hundred years ago and who were secretly involved in the occult.

The Fabian socialists designed the new world order, but they also inspired secret occult societies and the Society for Psychical Research, founded in the UK. Past and current members include Frederick Myers, Alfred Russell Wallace, Sigmund Freud, W. B. Yeats, C. G. Jung, William James, Peter Underword and Charles Tart. This group has ties to the Illuminati and the development of mind control. Sigmund Freud and others helped establish the Tavistock Institute, which has implemented scientific mind control and social engineering worldwide.

In the Book of Revelation it talks about “sorcery,” which comes from the wordpharmakeia, from which we get the word pharmacy. It talks about a global government which maintains control through drugs, the occult and scientific mind control. This global government will eventually be controlled by the Antichrist and the False Prophet, who will head a one world religion and a one world economic system and who will place the mark of the beast on their subjects.

But this is just the tip of the iceberg! Planet earth is controlled by a Satanic Elite which has now come out in the open and begun letting people know they exist. Think of the blatant occult symbols that have been projected to six billion people through the media. America and the nations of the earth are being herded into a global government, global economy and a global religion. The global currency will probably be called the Phoenix, which is the bird on the back of the U.S. dollar that many people think is an eagle. The primary method of tricking hundreds of millions into accepting this new world order is through occult-based mind control. Mass mind control uses trauma-based programming just like an individual mind control program. The collective consciousness of the human race, primarily through the mass media, is being fed a constant series of images of horror, chaos, violence and destruction. Therefore the Illuminati slogan “Order Out of Chaos” is being implemented before our eyes. Another way of putting it is “manufactured crisis.” 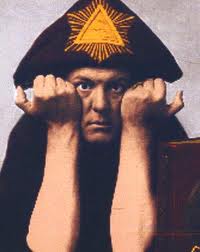 2014 will be an acceleration of these manufactured crises. The secretive Satanic elite are guiding the nations of the world into the global Luciferian government, economic system and religion that the Apostle John predicted on the Isle of Patmos when writing the Book of Revelation. It must be remembered that often things like social engineering, neurological sciences, economics and politics are the handmaidens of Luciferianism. As I have stated earlier, the entire counter-culture revolution of the 1960’s was a massive mind control experiment. But if you listen to certain key words from the counter culture leaders themselves you see its direct connection to Satanism. For example, a shadowy figure who worked for British Intelligence and influenced Adolph Hitler was Aleister Crowley, the Great Beast 666. Crowley’s name and face pop up all over the place among rock and roll groups and filmmakers, and the LSD prophet, Dr. Timothy Leary from Harvard, openly said he was carrying out Crowley’s work.

What most people fail to understand is that in the realm of wars, social movements and revolutions, we have entered into an entirely different kind of battlefield. For example, in their book “From PSYOP to Mind War: The Psychology of Victory,” General Michael Aquino and Col. Paul E. Vallely discuss using ESP (extra-sensory perception), “telepathic behavior modification,” para-psychology, psychokinesis (“mind over matter”), remote viewing, out of body experiences, and other New Age and occult practices in U.S. military intelligence. Their definitive statement is: “Mind War is the deliberate, aggressive, and convincing of all participants that in a war we will win that war.”

“There are some purely natural conditions under which minds may become more or less receptive to ideas, and Mind War should take full advantage of such phenomena as atmospheric electromagnetic activity, air ionization, and extremely low frequency waves.”

That would suggest that EMF waves could be used against foreign enemies and theoretically U.S. citizens.

The co-author of “MindWar” was General Michael A. Aquino, a PSYOP Research & Analysis Team Leader who had helped found the Temple of Set, an allegedly Satanic organization which was the successor to Anton Szandor LeVay’s Church of Satan. Those who would dismiss Aquino as some kind of occult nut should think twice. After reading his papers and research it is obvious that the man has a highly sophisticated understanding of history and the neurological sciences.

What many people do not understand in our nation and world is that they live in the illusion that battles are being fought with conventional warfare. The reality is that military warfare, social movements, religious movements and political campaigns are being fought by implementing neurological science that is 50 years beyond what we are seeing in science fiction novels.

In addition, modern Evangelical theology has been largely formed not by the Bible, but by highly advanced and scientific methodologies of personal and social transformation. For example, the Seeker Friendly Movements and the Emergent Church Movement have been synthetically created with mind-science technologies that began at the Frankfurt School in Germany in the late 1800’s and have evolved into neurological sciences which can program reality through the creation of new neurological pathways and the re-programming of DNA.