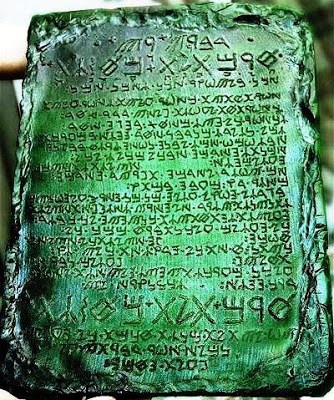 The original system of Jewish Mysticism known as Kabbalah was reportedly derived from three works:

Chilling and deeply occult. It gives the impression of peering into the antideluvian era, a subject currently enjoying much popularity in modern prophecy circles.

The Tablets of Thoth are imperishable, resistant to all elements, corrosion and acids. In effect, the atomic and cellular structure is fixed, and no change can take place, thus violating the material law of ionization, according to Bibliotecapleyades.

Upon them are engraved characters in the Ancient Atlantean language; characters which respond to the attuned thought waves of the reader and which release much more wisdom and information than the characters do when merely deciphered. The Tablets are fastened together with hoops of a golden colored alloy suspended from a rod of the same material.

Dr. M. Doreal has translated this Work, and has published through the Brotherhood of the White Temple, a translation of ten of these twelve Tablets. He has divided the ten into thirteen parts for the sake of convenience. The last two Tablets are found in the “Interpretation of The Emerald Tablets”, also by Dr. Doreal.

When Thoth, the Atlantean and Master raised the people of Khem (Egypt) to a great civilization, and when the time came for him to leave Egypt, he erected The Great Pyramid over the entrance of the Great Halls of Amenti. In the Pyramid, he posited his records and appointed Guards for his secrets from among the highest of his people.

In later times, the descendants of these guards became the Pyramid Priests, while Thoth was deified as the God of Wisdom, the Recorder, by those in the age of darkness which followed his passing. In legend, the Halls of Amenti became the underworld, the Halls of the Gods, where the soul passed after death for judgment.

During later ages, the ego of Thoth passed into the bodies of men in the manner described in The Emerald Tablets, a Book of Record and Occult Wisdom which he wrote and left in the Pyramid for those of a future Age of Light.

This is the First episode on the Emerald Tablets and its engravings by Lou Bernedetto, written by Thoth, the Atlantean from the Lost city in Time of Atlantis. Thoth is an imortal who was once a very long time ago a regular human being who lived in a time over 50 000 years ago 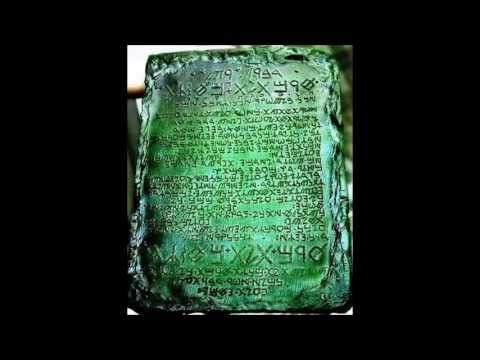 Second Video release of the Emerald Tablets by Lou Bernedetto.  Like all the Tablets they are written by an Atlantean King Priest who ruled and lived in the Great Lost City in Time of Atlantis, over 50 000 years ago. Thoth is a Human being that lived in a time long ago during an age now lost to us at presant. Atlantis was a great civilazation that thrived & flourished for many Tens of Thousands of Years. Not only were they rulers of the sky and the land around them. But they were beings of peace, wisdom and most importantly, a people witth Great Soul Force 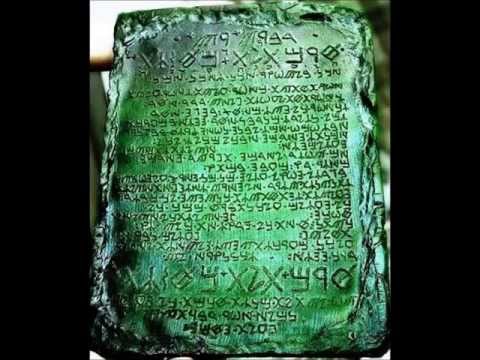 Translation and Interpretation by Doreal

Originally published in mimeographed form in the 1930s by a mysterious “Dr. M. Doreal,” these writings quickly became an underground sensation among esotoricists of the time.

Tablets 1-13 are part of the original work; tablets 14 and 15 are supplemental.

No one has ever seen the original tablets mentioned here, and in all likelihood, these writings would be considered channeled material today.

Dr. M. Doreal, is a spiritual teacher of multitude of seekers of light, having founded the metaphysical church and college. Doreal is the author of all of the organization’s writings and teachings and was granted permission for the esoteric wisdom to be remitted in the public forum by the Great White Lodge and the Elder Brothers of mankind who shape and form the spiritual evolution for mankind.

Doreal writes of the secrets of the symbolism of all mystery schools and gives a precisely and beautifully written step by step progression all seekers have searched for in their quest for oneness with God and attainment of the cosmic consciousness. After traveling the world for knowledge of the light and truth, Doreal began publishing his findings in a spiritual retreat in Colorado named Shamballa. Doreal studied the ancient teachings of the emerald tablets, the wisdom of the Kabbalah, and the light Jesus brought to mankind. He has translated many ancient texts into English and other languages for the masses to read in order for all of us to reach atonement within ourselves and the cosmic universe. All his publications are available through the brotherhood of the white temple publication office.

However, the Emerald Tablets of Thoth the Atlantean are still part of the modern Corpus Hermeticum, for they elaborate and deepen the meaning of the historical Emerald Tablet and writings of Thoth/Hermes. – Preface

– The History of Thoth the Atlantean

– The Halls of Amenti

– The Key of Wisdom

– The Dweller of Unal

– The Key of Magic

– The Key of Mysteries

– The Key of Freedom of Space

– The Key of Time

– The Key to Above and Below

– The Law of Cause and Effect and the Key of Prophecy

– The Keys of Life and Death

A translation of all 12 tablets is also found at:  http://www.crystalinks.com/emerald1bw.html