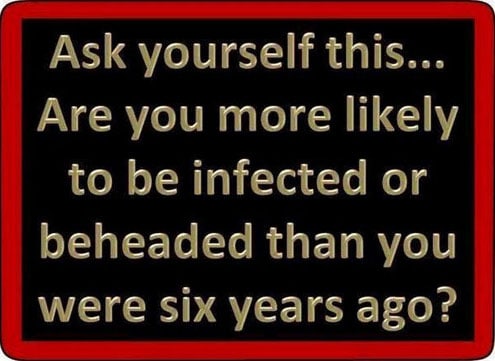 See a common thread? The biggest threats on our immediate horizon overlap and domino. Never have we faced with such monumental challenges.

When Reuters released the story concerning big bank collapse ‘war games’ Friday (and right before a holiday), creepy-crawly hairs roamed my neck. If such an event transpires, people will be poised at the edge of 10-story windowsills again a la 1929.

Instead, ebola took center stage over ISIS, probably because this deadly threat has pierced our nonexistent borders and landed in our healthy Country. Initially, Obama must have rubbed his hands in glee. It took the world’s eyes off his do-nothing policies regarding savage Muslim extremists chopping and lopping heads. As someone else duly noted, all Muslims aren’t terrorists, but all terrorists have been Muslim. That is exceedingly uncomfortable for our Grief-in-Chief to acknowledge. Since he finds it difficult to call a terrorist what he or she truly is, ebola must have been seen as a welcome, if short-lived, diversion. That is, until on this issue too, Obama became quite flaccid.

In his limp-leader style doing his best to circumvent work and intel briefings, another mess landed in his lap – possible megabank collapses. This scenario has never before slid off the lips of the Big Boys – not in the take-it-seriously mode because they had bank bailouts. Yes, a small bank here or there went out of business, but others were shored up with countless billions in bailouts. Several rounds of them. How close this event must be for them to considerit, let alone practice how to deal huge financial institution failures!

Obama must be quivering in his golf shoes. Any of the aforementioned ‘tribulations’ requires him to don big boy knickers.

Since 18 to 20 world governments are looking at big bank failures as a possibility, then it is a matter of time before it becomes reality. There’s little they’ve practiced for that hasn’t come to pass and a LOT they’ve ignored that slammed us in the backside.

While bank bail-outs are out, bank bail-ins are on the table. Think it can’t happen? The precedence set in Cypress last year was no fluke. Cypriot banks seized up to 40% of customer deposits.1 Their toes tested the water for the rest of the world. Banks closed for 2 weeks to prevent customers from “draining their accounts as politicians scrambled to come up with a plan to raise enough funds for Cyprus to qualify for 10 billion euros ($12.9 billion) in bailout loans for its stricken banking sector”.2

People stood in line 6 HOURS to find they could only withdraw €300 or $383 per person per day. No checks could be cashed and if leaving the country, they could only take a paltry €1,000 or roughly $1,250. That wouldn’t buy much of a trip.

If this article doesn’t shatter rosy glasses, nothing will.

WASHINGTON—They say practice makes perfect, so top U.S. regulators and their British counterparts will conduct “war games” Monday to rehearse how they would handle the failure of a huge financial firm with operations in both countries.

The exercise—the first of its kind—is intended to test the new strategy developed by international regulators in the past six years aimed at handling the collapse of megabanks without the taxpayer bailouts and market tumult that characterized the 2008 crisis.

Making the plan work, and convincing the world it can work, is part of the regulators’ drive to end the problem of “too big to fail” institutions—those whose collapse would o so much damage to the wider economy that policy makers would be forced to use taxpayer funds to keep them in business.

“We want to make sure we are able to handle an institution that previously would have been too big to fail,” Mr. Osborne told reporters Friday, during meetings here of the International Monetary Fund. “We are confident in this framework, but we are testing it.”

Monday marks the first time that various principals, or officials who would make the big calls in a real-life crisis, will meet in person for such an exercise, though they have spoken about it on the phone before and staff members have been working together, according to officials.

International coordination is vital for such a plan to work, since the biggest banks have tentacles far beyond their home countries. U.S. banks are heavily exposed to the U.K., and vice versa. More than 80% of the international assets and derivatives of top U.S. banks are based in the U.K, for instance, according to the FDIC.

The chief executives of 18 large U.S., European and Japanese banks are set to agree in principle at the Fed on Saturday to wait up to 48 hours before seeking to terminate derivatives contracts and collect associated payments from a troubled financial institution, said people familiar with the meeting.3

We’ve had so many, many warnings to get ready in all arenas – physically, spiritually, mentally. Numerous, major natural disasters remind us Earth is a fragile piece of real estate; economic dips and slips send tremors throughout global markets (at one point yesterday, the Dow plunged more than 460 points – a true Pepto-Bismol day); new or formerly ‘dead to America’ diseases are coming ashore; food is poisoned by GMOs, pesticides, aspartame, etc; and government stripped a record $3 TRILLION from our wallets in taxes this year. The list of dramas and traumas is longer than Walmart lines stampeding for the latest Christmas toy. Government tries to dictate our lives, invades every aspect of privacy, strips away our dignity and rips away Constitutional rights. They strive to replace decency with the unthinkable.

When a Texas city – God-fearing TEXAS – issues “subpoenas demanding pastors turn over any sermons dealing with homosexuality, gender identity or Annise Parker, the city’s first openly lesbian mayor”4 – you know the world is upside down. Ministers who fail to comply could be held in contempt of court. This is insanity.

Had the bilious conditions we are now forced to swallow been instituted overnight instead of incrementally, its authors would have been met with a lead-lined ‘howdy’. Martial law and FEMA camps would surely characterize America.

Regardless of political persuasion, people are getting it. Even the ‘sleepy Sadies’ are waking to the rude screech of an imploding world. Nearly everyone sees that the America we knew just a decade ago has vanished. Believers know we are at the brink of Tribulation, maybe 2 toes in. Non-believers see the globe is a mess and are waiting for the hammer to slam.

A new poll released Oct. 15, finds 58% of voters feel things in the world are “going to hell in a handbasket.” That includes nearly half of Democrats (48%) and majorities of independents (61%) and Republicans (71%).5

That is extraordinarily ugly for Obama — and Americans! We’re the ones who have to live with his ‘fundamental transformation of America’ for another two years. Heaven only knows what shape this Country will be in by then…

This morning I received a note from a woman asking what to do, right now, to prepare.

I am looking for godly advice. I am a widow, home paid off, bare essentials utilities, no cable, no land line (cheaper to have cell from a work discount). Thinking of getting rid of internet at home since it’s on my phone.

I have some metals, not much, and insurance money that I have questions on. I am diversified so to speak, can’t retire (if I can ever retire) until 4-5 yrs….and don’t know if hubby’s social security will be anything.

Would you take out insurance monies and stock up on foodstuffs and cash on hand and buy barter items?

I have a great church family and if I can assist them at all before the stock market crash, I would love to, by having foodstuffs.

I am torn between trusting fully in God. This is all His and I want to be the best steward I can, but I fight that if I prepare, it’s all for nothing anyways.

My financial guys says stay the course…what would you advise?

No one knows when the stock market will crash or banks will close. That said, this Reuters article from a few days ago is a bit concerning: U.S. and UK to Test Big Bank Collapse In Joint Model Run.

We’re not selling food, so this is completely unbiased. We would prefer to have goods in hand rather than all cash. Reserve some cash in case you need it, but you can’t eat it. You might also consider paying ahead on utilities so you have water, heat, electricity etc.

God doesn’t want us to live in a spirit of fear or be ignorant. You can trust God and still not be slack. Two great examples were given in scripture about preparing your household.

Remember Noah and Joseph. They were both told by God to prepare and in obeying His word, they saved countless people. Noah, in essence, saved mankind from complete extinction. Joseph saved Egypt from 7 years of famine thus saving the Hebrews and in the broad view, saved the House of David so Christ could be born.

You can still lay up treasures in heaven while being personally responsible, preparing as shown in scripture, so as not to be a burden on your friends and neighbors, or dependent on government.

So in the words of Proverbs 27:12 — A prudent man foresees evil and hides himself; The simple pass on and are punished.

Now while she only inquired about food and $$, don’t forget all the other things you should set aside for emergencies: water and water purifiers, meds, supplies for pets, etc., alternate heating and cooking and as we approach winter, make any repairs to fully insulate your home. Hopefully, everyone is as ready as can be, but if not, please make use of the FREE prep information on my preparedness website.

Don’t be fooled, don’t wait. Everything is much worse than you think.