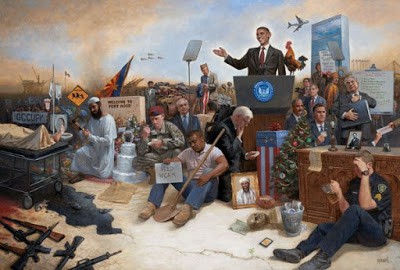 Only once— in ancient Babylon.  In Genesis 11:1-9 we learn about a city that was built to create a one world government and religion.  It’s inhabitants were Satan worshipers.  Having refused the promise of redemption given to mankind in Genesis 3:15, they’d left God’s camp and were seeking their own way.  The one world government they created became known as the Tower of Babel.

Here is the accounting:

“Come, let us build ourselves a city, with a tower that reaches to the heavens, so that we may MAKE A NAME FOR OURSELVES; otherwise we will be scattered over the face of the whole earth.”Genesis 11:4

To keep this from happening God confused their language so that they could not communicate with each other.

“Come, let US (the Godhead: Father, Son and Holy Spirit) go down and confuse their language so they will not understand each other.”Genesis 11:7

As a result they stopped building the city and were scattered across the land.

However, even though God scattered them they did not stop rebelling against Him.  Instead they spread their Satanic religion wherever they went.  This religion became known as THE MYSTERIES.  In my article, Decoding Scripture to Discover Antichrist, I trace the Mysteries through 7 world powers.  I show how they eventually wound up in control of the Roman Catholic Church.

Who is Behind the New World Order?

There are many divisions, but all are led from the top by the POPE himself.

Here is a chart showing you the breakdown:

Here is a further breakdown of those divisions:

At the top are Jesuits.  Pope Francis is a Jesuit.  He is the first Jesuit Pope.  Prior to Pope Francis becoming Pope in March 13, 2013, the Office of Pope (White Pope) was controlled from the outside by the Black Pope, a Jesuit organization.

In this article I will be focusing primarily on the Illuminati’s control of the RELIGIOUS division, but if you read my article,The Society of Jesus, you will see that the Knights of Rome control the other divisions of society as well.

Within the division of RELIGION, the Jesuits have been working to change the thoughts and minds of people.

Because they represent Satan, who can transform himself into an angel of light (2 Corinthians 11:14), they operate subversively, pretending to be something they are not.

In my Deceptive Doctrines Series, I have already covered several false teachings the Jesuits have used to infiltrate and destroy Protestant churches: the pre-tribulation rapture theory, the 7 year tribulation theory and the rebuilding of a 3rd Jewish Temple theory.

They are also cultivating a few more false teachings that I’d like to discuss with you here.  They are:

In discussing these I will offer my conclusions as to WHY they are pushing these teachings and how a confused understanding of them could affect your effectiveness for God in the last days.

What is the Shemitah?

The Shemitah is a Sabbath of years.  That is, just as every 7th day is the Sabbath, every 7th year is the Shemitah.  God declared the Shemitah as a time when land should be rested from growing crops and debt held between fellow Israeli’s should be forgiven.

Historically, the Shemitah seems to have been all but ignored by Judaism, even in the days of the Old Testament. 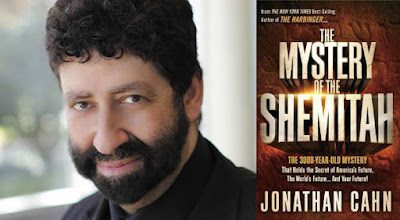 Recently, in his book The Mystery of the Shemitah, Rabbi Jonathan Cahn makes the case that nations who do not follow the requirements of the Shemitah will be judged by God.  He applies this warning specifically to America, showing how Elul 29, the last day of the Shemitah on the Jewish calendar, has coincided with drastic drops in the stock market, credit crises, oil price volatility, recessions, sell-offs, and the Great Depression in America.  Cahn figures that we are currently living in a Shemitah year, which will end on September 13, 2015.

Adding to these concerns is the “Super Shemitah” or the YEAR OF JUBILEE, which is the year FOLLOWING 7 sets of Shemitah’s (7 x 7 = 49 + 1 = 50).  According to Cahn September 2015 running through September 2016 is a Jubilee year.  Cahn says that a Jubilee year could bring even more of God’s judgment on rebellious nations such as America.

Dear readers, is the teaching of the Shemitah by Cahn accurate?

I would tell you unequivocally, NO.  It is not accurate, it is a lie!

The Shemitah was given to a specific nation, Israel, not America— it doesn’t just reappear in another country in another time.  In Colossians 2:16, the apostle Paul tells us that God will not judge us according to Sabbath days or Shemitah days.

Therefore do not let anyone judge you by what you eat or drink, or with regard to a religious festival, a New Moon celebration or a Sabbath day (Shemitah day).Colossians 2:16

So where does this come from?  Who is Rabbi Jonathan Cahn and why is he teaching that God is going to judge America?

Rabbi Jonathan Cahn claims to be a Messianic Jew.  If this is true then why does he disobey scripture and call himself a Rabbi?

“But you are not to be called ‘Rabbi,’ for you have one Teacher, and you are all brothers.Matthew 23:8

Instead, with research it easy to see that Cahn is a Freemason (link) working for the leaders of the Illuminati hierarchy.  He is purposely twisting scripture (link) for the benefit of the New World Order.  By writing The Mystery of the Shemitah, and The Harbinger before it, Cahn is CO-OPTING us into believing that the coming calamity is of God when it is not!  In reality it will be a STAGED EVENT completely instigated and controlled by the Illuminati for the purposes of bringing in the New World Order.

Christians that fail to see this are being used to substantiate the LIE and will be part of the GREAT DECEPTION spoken of in Matthew 24.

For there shall arise false Christs, and false prophets, and shall shew great signs and wonders; insomuch that, if it were possible, they shall deceive the very elect.Matthew 24:24 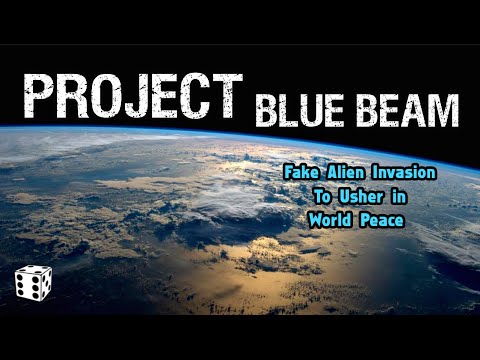 Project Bluebeam – A Holographic Rapture and the Prophet Hologram 1/2 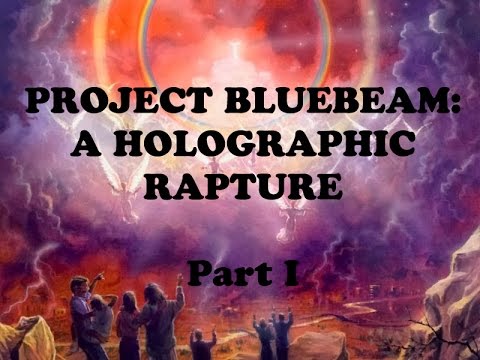 Project Bluebeam – A Holographic Rapture and the Prophet Hologram 2/2 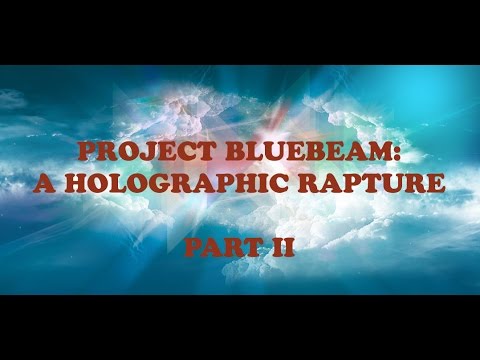 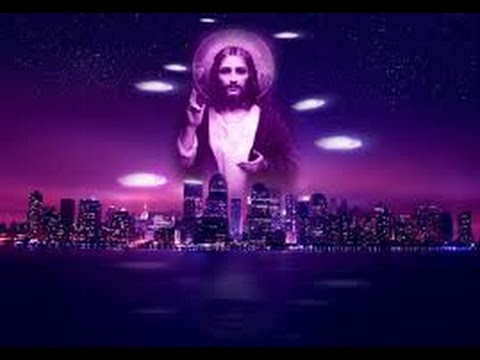 Another figure playing into the hands of Satan’s end time movement is John Hagee— author of “In Defensive of Israel” and “Four Blood Moons”. 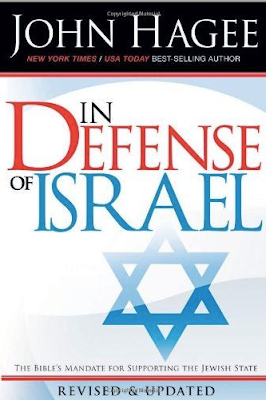 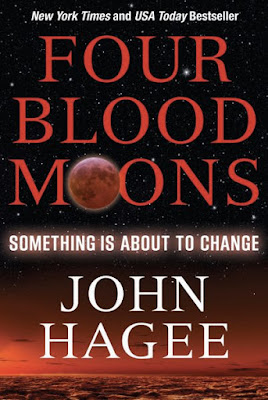 Christian Zionism is the belief that the return of the Jews to the Holy Land, and the establishment of the State of Israel in 1948, is in accordance with Biblical prophecy.

This idea comes for Genesis 12:1-3, 7.  Christian Zionist’s make the claim that God is promising Abraham and his seed the land of Canaan as an eternal inheritance.

But this is not what the Bible is teaching here.  Listen to this short video for an explanation.

Christians Inherit the Promises of Abraham

In review, Genesis 12:7 says “Unto thy SEED will I give this land.”  What we need to understand is, “Who is Abraham’s seed?”

Now to Abraham and his seed were the promises made. He saith not, And to seeds, as of many; but as of one, And to THEY SEED, WHICH IS CHRIST.  There is neither Jew nor Greek, there is neither bond nor free, there is neither male nor female: for ye are all one in Christ Jesus.  And if ye be Christ’s, THEN ARE YE ABRAHAM’S SEED, and heirs according to the promise.Galatians 3:16, 28-29

CHRIST is Abraham’s seed and if you are in Christ, YOU are Abrahams seed and heirs according to the promise— NOT the ethnic Jew!

Therefore, the claim by Hagee that ETHNIC JEWS were given the land of Canaan as an eternal promise is FALSE.

The truth is that Christian Zionist’s and Hagee are aiding and abetting the enemies of God— the Rothschild Illuminati Zionists who created the modern State of Israel in 1948 for the Pope.

For more on this read my article, Is the State of Israel in Existence Today Because the Jews Were Obedient to the Mosaic Covenant?

Christian Support for the State of Israel is Unbiblical: John Hagee Exposed

Through his book, Four Blood Moons, Hagee is also in collusion with those perpetrating the end time Great Deception discussed above.  His book would have you believe that the blood moons are bringing a fulfillment to the prophecies of Joel 2, Acts 2 and Revelation 6.  This theory is throughly debunked by Chris White in the following video.

Blood moons are nothing more than a phenomenon of natural science.  They do not fulfill the requirements of prophecy that call for the sun, moon and stars to darken at the same time.

What Will Happen in September 2015?

One thing we can be sure of if anything happens— it will NOT be by God’s hand.  It will be by the hand of the enemy,it will be a STAGED event carried out by the Illuminati.

The currency collapse could cause rioting throughout the world as people realize their bank accounts, 401K and pension plans have been wiped out.  Martial law will be declared.  Jade Helm troops will already be in position to deal with the rioting.

Pope in the United States

On September 28, 2015, the 4th blood moon will occur. Using HAARP and Bluebeam technology, “miracles” will begin to appear.  We could see the arrival of “alien saviors” and fire from heaven.  The Pope will be revealed as “God on earth”.  See my article, The Return of the Nephilim, UFO’s and Aliens: Are They Biblical? Part 1.

These are only a few of the potential events some expect to see.  Others include:  an asteroid strike in the Atlantic on September 23, 2015, a major earthquake on the west coast of the United States, an EMP attack from Russia and an invasion from the south.  The unleashing of CERN and otherweapons of the Antichrist.

It is hard to know which of these events are true and which are disinformation spread by the elite.  However, I think the collapse of the dollar (by the Federal Reserve) is eminent, many economists agree.

Dear readers, I encourage you to be prepared.  While these types of events have been forecast by many for a long time, the last thing we would want to do is become indifferent.  I believe the parable of the 10 virgins teaches us a valuable lesson in preparedness (Matthew 25:1-13).

5 virgins were prepared and 5 weren’t.  5 had to go back into the marketplace to buy oil and 5 didn’t.  Have you allowed your hearts to become cold to the constant warnings of end time events that you don’t prepare any longer?  I believe this is the plan of the enemy—to make us indifferent.

Personally I think the time has come.  I think the market will crash this September.  Consider the pain your family will endure if you don’t prepare.  Are you willing to take that chance?

Do you consider yourself wise?  Only time will tell.