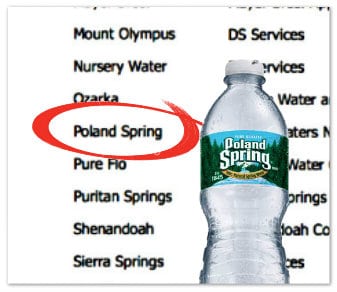 The world is slowly waking up to the fact that fluoride, a by-product of the phosphate fertilizer industry, wreaks havoc on the brain and body. Despite peer-reviewed scientific evidence against it, fluoride is still added to 70 percent of U.S. public drinking water supplies.

What’s more is that processed beverages and food, tea, and even bottled water contain fluoride. That’s right, many popular brands of bottled water have a known neurotoxin added to them.

It’s no wonder that dental fluorosis has skyrocketed in the U.S. over the past 60 years (image right). Dental fluorosis is a side effect of fluoride ingestion that typically effects children. And it’s awful. Click HERE to see what it looks like, but you might want to take my word for it because it’s not a pretty sight.

Additionally, the aforementioned peer-reviewed evidence against fluoride includes a recent publication in the world renowned, weekly peer-reviewed Medical Journal, the Lancet. This report classifies fluoride as a neurotoxin and concludes that it notably decreases the IQ of children.

Fluoride is a toxic waste from the phosphate fertilizer industry

In the 1950’s it was determined that phosphate factories emitted toxic gases that were destroying the environment. Crops were scorched, destroyed, and cattle became crippled. Chemical and environmental engineers were employed with the task of filtering this toxic waste so that it would not escape into the atmosphere.

My former chemistry professor was once one of these engineers and would often reminisce of his days developing and designing what the industry later referred to as scrubbers. Scrubbers were installed to filter out this toxic waste thus protecting communities from harmful gases that when leached into the atmosphere would destroy their health and ecosystem. But were citizens ultimately being protected?

Chances are that you are currently a victim of the industry’s fluoride emissions although you may not live anywhere near a phosphate plant. For you see, when the scrubbers clean these emissions, hydrofluorosilicic acid, a classified hazardous waste is collected and barreled up. It is then sold to communities across America to be added to the public water supply as the primary fluoride chemical for water fluoridation.

Of course many people know this disturbing fact and avoid drinking from the tap. But what if I told you that the very water you’re spending a pretty penny on to avoid fluoridation, is too fluoridated. You might be surprised which brands contain fluoride, but when you see who owns them it will all make sense.

The list below contains data provided by the International Bottled Water Association that you can use to make sure you’re not feeding fluoride to yourself and your family.