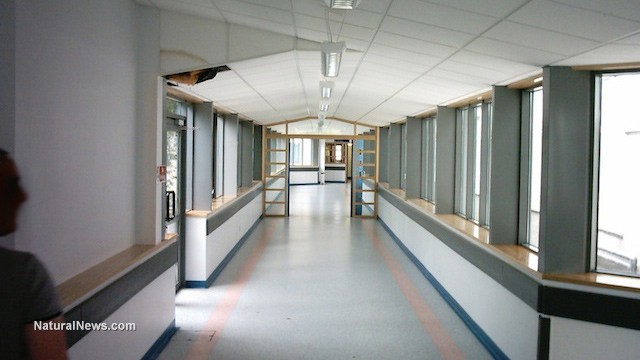 (NaturalNews) The states of New York and New Jersey have leapfrogged federal guidelines and set up their own mandatory 21-day quarantine requirements for arriving passengers who had direct contact with Ebola patients in West Africa.

“The patients with the highest level of possible exposure will be automatically quarantined for 21 days at a government-regulated facility,” reports CBS News. [1] Government-run quarantine camps, in other words, are now a present-day reality in America.

“We believe it within the State of New York and the State of New Jersey’s legal rights” says Governor Cuomo. And it almost certainly is. In fact, this move by New Jersey and New York is one of the smartest things any government official has yet done in the United States to thwart the spread of Ebola.

But take notice of something worth considering: Do you see how quickly we are calling for mandatory government quarantines? It didn’t take much, either. Just one returning passenger with Ebola in New York City was all it took, in fact. Suddenly, we are all supporting a police which was considered a whacky theory just a few years ago.

Five years ago, talk of government quarantines was called a “conspiracy theory”

Consider the history of the very idea of government-mandated medical quarantines. Just five years ago, anyone suggesting that such a thing could be happening in the USA was called a “conspiracy theorist.” I know this because I’m one of the few people who warned about precisely this scenario many years earlier, and I’m often called a conspiracy theorist for accurately predicting things that would come true years later.

As soon as Ebola arrived in America, however, all talk of mandatory quarantines suddenly shifted from “conspiracy theory” to “medical protocols.” Suddenly the idea of forcing certain people into government-run facilities from which they are not allowed to leave — a sort of medical prison — was being openly talked about as an important option to consider.

In Dallas, the family members of the late Thomas Duncan were spotted violating their self-quarantine and were ordered back into a self-enforced lockdown. Not long after that, NBC’s “just get your damn flu shot” medical correspondent Dr. Snyderman got caught violating her self-quarantine after returning from West Africa where she might have picked up Ebola. And just a few days ago, Dr. Spencer in NYC decided to spend a night on the town while claiming he was also “self-quarantined.” It didn’t take long for officials to realize that the entire idea of a self-quarantine is completely bogus for the simple reason that nobody follows it.

It turns out that even doctors and journalists violate self quarantines, meaning that we can’t trust people to faithfully quarantine themselves. Suddenly the idea of a government-enforced mandatory quarantine made all kinds of sense. It didn’t sound like a conspiracy theory anymore. It sounded like a sensible idea to help stop the spread of Ebola.

Now we live in a nation where public sentiment openly supports government-enforced quarantines of people who might carry Ebola. Notice how quickly this all happened? Some might even point out the problem-reaction-solution overlay to all this, proposing that Ebola has been hyped up for precisely the purpose of rolling out a medical police state in America. I don’t personally think we are there yet, but we are clearly on the path towards it, and there’s nothing stopping the President from announcing a nationwide medical police state right this very minute.

If the government claimed the authority to detain one person suspected of carrying Ebola, that same authority must also apply to one million people, you see. What you are witnessing right now, in other words, is absolute proof that all of us who warned about government quarantines and the mass rounding up of citizens to be placed into FEMA camps were, in fact, rather prophetic.

The things we warned about five years ago that sounded crazy at the time are now national news headlines. If I had said in 2009 that a level-4 biohazard viral infection would be running loose across New York City, most people would have utterly dismissed the idea as loony tunes. And yet that’s exactly where we are right now.

Those of you who are among the more astute observers of reality will notice that the domains www.BioDefense.com and BiologicalTerrorism.com were registered 15 years ago. In other words, yes, I saw this coming 15 years ago and had the domains registered with the intention of sitting on them until the future arrived.

I have also purchased domain names on other future events which I know are coming, but if I were to mention any of those right now, they would seem just as crazy as an Ebola outbreak in NYC would have seemed until recently. The simple truth is that most people aren’t ready for a future that’s any different from their present. They can’t envision change coming, so they live in a state of denial about what that future may bring.

If I told you that the United States of America as we know it today will come to an end before 20 years from now, most people can’t cognitively process the concept because of their normalcy bias. So I don’t bother explaining the details until the time comes, because only then will people have enough evidence in front of their own eyes to realize the magnitude of the changes unfolding before them.

You wouldn’t believe how many feature stories I’ve written and then archived without publishing them for this very reason. Recently, I wrote a story about the risk of Ebola terrorism taking place in New York City, but I realized the public wasn’t ready to hear that yet so I shelved it. I may still publish it, but not before the public is ready to grasp the message with more clarity. If I publish it right now, too many people will remain in a state of denial and anger because they hate any new information that challenges their Matrix-like mental constructs.

There are many other things the public isn’t ready to hear. Remember, America is a place where people are so willing to remain willfully hypnotized by socially-accepted delusions that they still think JFK was assassinated by a lone gunman and that the WTC 7 building collapsed in perfect symmetry due to a small office fire. We are all living in a nation dominated by delusional people who are sleepwalking through a fictional construct, which is precisely why they are so psychological shocked when something happens that they never considered: A viral outbreak, a solar flare, a grid down power failure, a nuclear accident, a debt implosion or even 98 million people being injected with primate cancer viruses as part of a nationwide polio vaccination scheme, which is exactly what already happened in U.S. history.

If you want to know what’s really on my radar right now, there are three things that I suppose I will dare to mention briefly. The first is the Ebola outbreak, which I believe will be kept under control in the USA for the next 12 months or so, but if Ebola becomes endemic in Central or South America, then North America will be in serious trouble and may have an uncontrolled spread within 24 months.

The second thing on my radar right now is an impending stock market crash that would rival the “Black Monday” crash of 1987. The market is being pumped up right now with $200 billion a quarter in money creation by the Fed. Interest rates are near zero while inflation is around 6% or more. Right now, a massive wealth confiscation scheme is taking place, siphoning billions of dollars in purchasing power from the American people without them even knowing it. The minute the Fed stops pumping dollars into the system, it will catastrophically collapse.

The third thing on my mind is the possibility of the Russians waging a nuclear attack on the USA immediately after the country is weakened either by a viral pandemic or a devastating stock market crash. The mainstream news hasn’t covered it much lately, but Russian strategic nuclear bombers have been making practice runs near Alaska. Russian warplanes are conducting aggressive probing maneuvers on attack vectors to U.S. targets. While neither Russia nor China would dare attack the USA on a normal day, a weakened nation suffering from a devastating economic collapse or a nationwide viral pandemic would create precisely the circumstances during which aggressor nations (like Russia) might pounce.

These three things are fast approaching and represent real, legitimate risks to our nation. Everyone interested in preparedness, self-reliance and survival should seriously consider these scenarios. Learn about Ebola survival and preparedness at www.BioDefense.com

And remember: The government quarantines of suspected Ebola carriers has now begun. It is no longer a conspiracy theory; it is now policy.