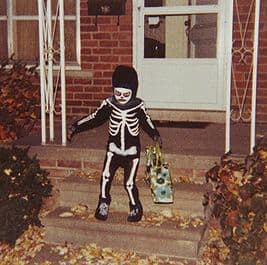 The Hidden History of Halloween

Behind the playful facade, Halloween
celebrates perversion, which is the
real meaning of the occult.
It is “indoctrination into Druid paganism,
witchcraft, and Satanism.”

Why are we celebrating one of the holiest days in the satanic calendar? The second “holiest” time is May Day, the Communist-Satanist founding day: More evidence that Communism is Satanism, and  society is satanically possessed.

by Richard Evans
I was initiated into Halloween in 1959.  I was four-years-old.  My grandmother let me choose a costume at the Five and Dime. I went straight for a latex red devil mask that came with shiny red rayon cape.When I wore the mask, I felt transformed into something more powerful than my four-year-old self.  After Halloween night, my grandmother took it away because I persisted in wearing it. Neighbors were beginning to talk. 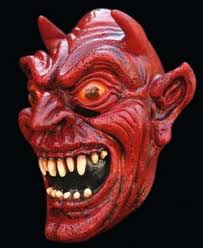 Years later I learned in an anthropology course that masks, chants and dancing are used to invoke spirits. “The person wearing the mask feels internally transformed and takes on temporarily the qualities of the god or demon represented by the mask” (Biedermann, Hans. Dictionary of Symbolism, p. 218)

Now I dread the time when rubber skulls pop up on neighbor’s lawns, and   supermarkets look like they hired the set director from “the Killing Fields”.

But don’t worry.  If skulls and rotting zombies don’t turn you on, Halloween has also become about kinky sex!   How ’bout handing out candy to little girls dressed like Lady Gaga and little boys dressed in spandex tights.

At a pre-Halloween party in my neighborhood, I was dumbfounded that the children’s costumes all have GENDER BENDING themes this year.  Girls dressed like leather bikers, one was a soldier,  and boys wearing fruity body stockings under the guise of ‘superheros’.

My grandmother explained that Halloween is part of our family heritage. It was the ancient harvest festival called Samhain (pronounced “sah-win”).   It came from the old religion of the Druids, and she showed me a picture of Stonehenge in an old encyclopedia.Julius Caesar described the Druid Samhain harvest festival in ‘The Gallic Wars’.  He described the Druids as a theocracy that enslaved the peasant population through terror.  The joy of harvest festival was combined with mass human sacrifices, when thousands of men, women and children were burned alive in giant ‘Wicker Man’ structures. 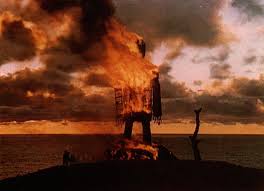 Caesar wrote, “Druids administer these sacrifices. Large effigies interwoven with twigs, the limbs of which are filled up with living people which are set on fire from below, and the people are deprived of life surrounded by flames.”First century Roman historian Strabo recorded in his “Geography”:

“The Romans put a stop both to these customs and to the ones connected with sacrifice and divination, as they were in conflict with our own ways.”

So it was the Romans – not the Christians – that broke up the Druid theocracy.    A few centuries after the Druids demise, the Roman Empire collapsed and was replaced by the Roman Church, that in turn Christianized most of the festivals.  The Samhain belief that spirits of the dead and demons roam the nights of the Harvest Festival became “All Saints Day”.

The masked and cloaked Druid priests of old were replaced with peasant in masks and costumes.  Instead of demanding a family member in return for magical protection from spirits, the Christianized visitor asked for food in return for saying a prayer for departed members of the household.  But All Saints Day has absolutely nothing to do with anything in the Bible.

For nearly two thousand years, the barbaric Druid rituals were forbidden.  It may surprise you to realize that the Gallic Druid mass sacrifice tradition was resurrected by the Illuminati during the French Revolution. Rivers of Christian blood flooded the gutters of Paris.  Robespierre himself presided the “Festival of the Supreme Being” June 8th, 1794 in the midst of ten months of non-stop human sacrifice.

Sixteen Carmelite nuns of Compiègne were guillotined on 17 July 1794 for the crime of refusing to take off their habits and renounce their vows.  Since then the ancient festivals have been relentlessly resurrected under various covers.

There’s more to Halloween masks than changing suits.  The person wearing the mask feels internally transformed and takes on temporarily the qualities of the god or demon represented by the mask.

“It is an opportunity to act out one’s desires or fantasies. . . Halloween is unquestionably a night of inversion.”
(Rogers, Nicholas. Halloween: From Pagan Ritual to Party Night, p. 137)

“One’s identity can be discarded with impunity. Men dress as women, and vice versa. Authority can be mocked and circumvented.” (Skal, David J. Death Makes a Holiday: The Cultural History of Halloween p. 17)

There’s also a statistical spike of rapes associated with costume parties, especially if drugs are involved. 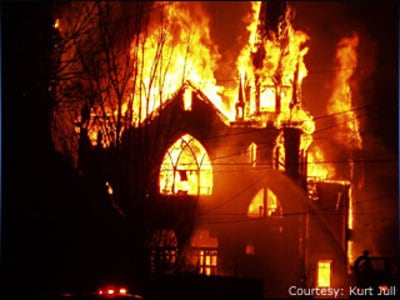 Devil’s Night or Hell Night is a crime wave of Halloween violence and vandalism. The most famous and destructive was ‘Hell Night’ in  Detroit, Michigan from the 70s through the 90s which crossed the line from smashing windows to major and widespread arson,  gun fights, and murder.In case readers are wondering, there never was a Jewish connection to Halloween at all.  Jewish religious schools warn parents against observance of  Halloween or Halloween parties or trick or treat because “observance of Halloween is pagan and therefore destructive to the Jewish educational process”. [1.]

Obviously, Halloween is destructive to the Christian educational process too – yet I see every year most churches and their schools actually hold major Halloween festivals.

Satan’s holiday gone from ingratiating the tolerance of churches to direct Christianity bashing.

CONCLUSIONHalloween was designed to be a framework for self initiation into the Luciferian way of thinking. Once a minor toe hold of the occult in modern life, why has Halloween imagery and obsession with lust and death become the mainstay of the entertainment industry?  Notice that as Halloween mushroomed since 1966, so has obsession and ‘revolution’ of perverted sex, the occult, and admiration of serial killers and psychotics.

If Jewish religious schools caution parents that observance of Halloween is pagan and therefore destructive to the Jewish educational process, that should also apply to Christian and Muslim parents.   Halloween is religious indoctrination and formation into Druid paganism, witchcraft, and Satanism.